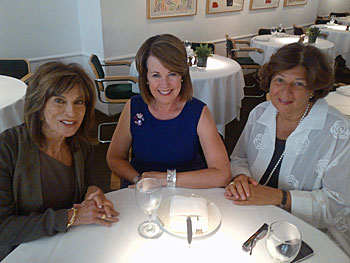 It was the usual head-spinning scene at Michael’s today—but with a twist. Besides the requisite roster of bold face names (Barry Diller) and talking heads (Tamron Hall, Nick Gregory) and random celebrities (Academy Award-winning songwriter Paul Williams who, it should be noted, penned many hits for The Carpenters) there was not one, but two comedians in the mix. While Louis C.K. slipped in practically unnoticed (except by us, of course), Gilbert Gottfried spent some time shaking hands before making his way to his table.

Amid all the air kissing and table hopping, I was glad to have my long-awaited lunch with Rikki Klieman and our mutual friend Mickey Ateyeh who, by now you realize, knows everyone in New York. Earlier this year I interviewed Rikki for Gotham who named her one of the ‘Most Influential Women’ in the city in their latest issue. What was to be a twenty minute interview turned into an hour-long conversation and we decided we still had plenty more to talk about. Enter Mickey, who was nice enough to arrange today’s get together. With Rikki and Mickey both fresh off their respective trips to Italy, they both arrived at the stroke of noon looking rested, relaxed, tan and ready to dish.

Before settling in for lunch, Rikki had to respond to a quick email looking for background information on the jury at the trial of James Holmes, the accused shooter in the Colorado movie theater unfolding now in a Colorado courtroom. Her role as legal analyst for CBS News has grown since the network launched CBSN, the live streaming video news channel. “All of us under contract have been asked if we’d like to appear on the site,” explained Rikki. “I love it. Everything is done at the highest possible level. I’m already there for CBS This Morning  I can tape a segment for the show and then walk down the hall and do a more long-form interview on CBSN.” These days there’s a steady stream of news stories that have kept Rikki busier than ever on both fronts. Just this morning, she taped a segment for the morning show on the “social hosting liability” of parents giving prom parties and a segment about genetic testing for CBSN.

Yesterday, she spent four hours on CBSN discussing the Holmes trial. “It was like being back on Court TV,” said Rikki, who was an anchor at the network for nine years and a contributor for a total of 15. Speaking of Court TV, it was her former boss Henry Schleiff that gave the green light to a passion project of Rikki’s that aired earlier this year. After a pitch meeting with Henry in early 2014, Investigation Discovery commissioned In the Line of Fire, a show she’d wanted to do ever since she attended the Medal of Valor Ceremony for Los Angeles police officer Hector Feliciano in 2006 “long before Ferguson and before Eric Garner.” As creator and host of the special, Rikki profiled law enforcement officers, giving viewers a glimpse of what it’s like to make “split-second decisions that changed the course of events” and “the emotional stories of officers themselves.” Rikki told me she hopes she’ll be able to do more specials like this in the future but, “Even if I never do another one, I feel like I’ve made a significant contribution to the discussion about the state of policing in America today.”

I’m sure you already know this, but Rikki is the wife of New York City police commissioner Bill Bratton. Bill was police commissioner under Mayor Rudy Giuliani and 20 years later (“Almost to the day”) is currently doing a second tour of duty as the city’s top cop. Married since 1999, the couple spent seven years in Los Angeles when Bill became police chief of L.A., then took a job in the private sector. When they returned to New York in 2009, Rikki was contemplating a move into the nonprofit world when a fortuitous meeting with some friends at the Four Seasons led her back to television. “I was thrilled because television is my first love.”