From HR practice to retail sales, these personas could bring a virtual human touch 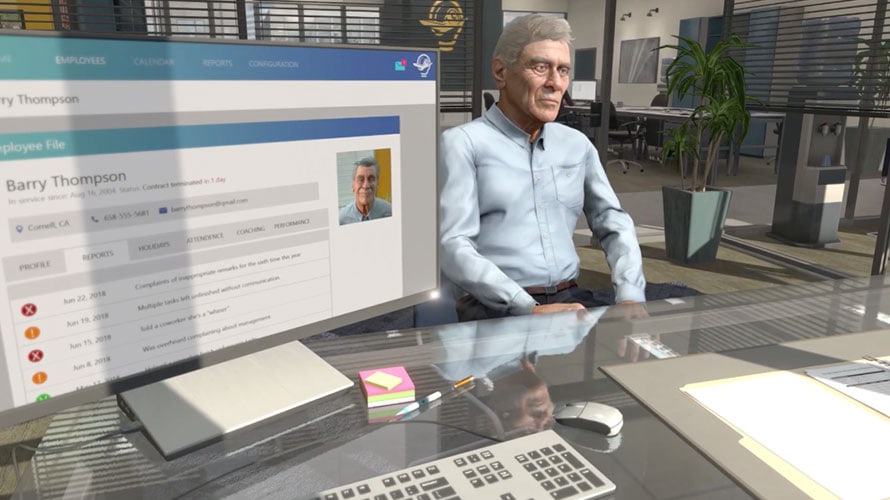 Kyle Jackson is sitting down for a tough conversation with a seasoned employee who has ignored multiple warnings from his boss about bad office behavior. This is strike three. Indignant, the worker protests to Jackson—his numbers are strong, and he’s worked at the firm for decades. Finally, the employee sighs, and a thick silence fills the room. Then Jackson takes off the headset and his reflection from the now-darkened computer screen looks back at him. The simulation exercise is over.

The aggrieved man, a virtual-reality simulation based on scans of an actor’s voice, looks and demeanor, is a character in one of many scenarios that Jackson, CEO of a startup called Talespin, has devised to help managers at client companies practice leadership soft skills. Resigned acceptance is OK in this case; handle his situation with less tact and he might choke back tears or start cursing.

Talespin is one of a small but growing number of startups exploring how semi-realistic human avatars, sometimes powered by basic forms of artificial intelligence, might be put to work in simple business contexts that otherwise take a certain touch of human personality. Other companies are exploring uses in retail sales, influencer marketing and customer service.

“We found that to do it well, to really solve the problem, which was testing the nuances of interpersonal relationships, we had to focus on what we called emotional realism as the driving factor,” Jackson said. “When I leave [the experience], I actually feel the emotion; my palms were sweaty. It’s an uncomfortable situation, and I was uncomfortable.”

Seeing that algorithmically generated grief in action indeed feels a bit off-putting, but Jackson claims he has Fortune-100 telecoms, insurance companies, and health care providers using his system (though he said he can’t publicly name any of them). For one deal, Talespin spent months building custom sales call simulations that map how each executive role at a small business might respond to an office phone service pitch.

One aspect of the appeal, according to Jackson, is that the characters are situated at a sweet spot near what designers call the uncanny valley, the point at which the more a graphic resembles an actual human, the more it makes observers uncomfortable.

“We pulled up just shy of the uncanny valley—somewhere kind of in Pixar land but better,” Jackson said.

Like most artificial intelligence at work in businesses today, these are not the robots that Elon Musk worries will take over the world. Their range of ability is narrow, but rooted in machine-learning algorithms and natural language AI technology that allows for a broad range of responses and naturally flowing interactions within that window.

Roland Memisevic is CEO of a Germany-based startup called Twenty Billion Neurons (abbreviated to TwentyBN), which makes life-sized retail sales clerk avatars that live in kiosks and help customers make shopping decisions. The company’s star digital employee is a female personality named Millie, but it has plans to expand its line to a range of different personas. Even more so than Talespin, TwentyBN’s designs err on the cartoonish side, and Memisevic is wary about the uncanny valley. 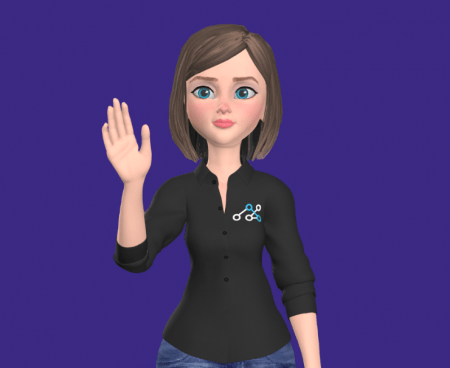 Millie is a virtual retail sales clerk from TwentyBN.
TwentyBN

Memisevic said much of the appeal of TwentyBN’s digital assistants at the moment comes from the novelty of the concept. But they are also backed by real AI technology; Memisevic is a computer science professor at the University of Montreal’s machine learning institute who studied under deep learning pioneer Geoffrey Hinton.

“It’s a lot currently around the wow factor for us,” Memisevic said. “It’s about getting people to see that there’s something entirely new that they haven’t experienced by far.”

To help familiarize potential clients and the tech industry at large, TwentyBN has begun to produce a weekly newsletter on headlines from the human avatar space. Memisevic said the small collection of startups has begun to feel like a community in the past year, and he hopes the newsletter can further that spirit and establish the niche as a serious technology.

“We as a community have to prove to the world that there’s real value in this, and it’s still a small community but it’s exploding,” he said. “It’s still a small enough space that everybody has a fairly good overview of everything that’s going on, but it is clearly exploding and there are more and more surprises where you go, like,  ‘Wow I didn’t know this thing existed.’”

But even companies backed by actual AI like Talespin and TwentyBN are somewhat of a minority in the space, according to Memisevic. The real headline-grabbing application of human avatars thus far has been the eclectic world of computer-graphic influencers on Instagram and other digital platforms, which synthesize the most attractive traits of real influencers and even manufacture interpersonal drama to promote very real brands.

The most popular by far of these is Lil Miquela, a creation of Los Angeles-based agency Brud, which has raised more than $6 million in three funding rounds from investors including big-name venture firm Sequoia Capital. She’s pushed brands like Prada and Chanel to her 1.5 million Instagram influencers and appeared at fashion shows and in music videos.

my guest edit for dazed beauty (@Dazed) is going uppppp this weekend! read my editor's letter (!!!) to find out why i picked the artists i interviewed: https://t.co/Pl1VsA1yS1 pic.twitter.com/WDqMjXmoG0

“Brud understands the audience of Miquela very well and that pocket of culture,” said Michael Dempsey, a partner at venture capital firm Compound (not an investor in Brud). “They are building a narrative or creating a character that those people think is really interesting.”

Dempsey, who specializes in seed-stage investments in emerging technology, started a website and Instagram account called the Daily Mirage last year to track the virtual influencer space. The news hub has begun to attract attention among its various subjects recently, and he now receives dozens of requests from virtual persona creators looking to be featured on the account and site.

He said there are probably at least 80 such characters on Instagram right now, though many have been abandoned, and the bar for quality is not high. They’re mostly the work of boot-strapping artists and tiny aspiring startups, but there are a few companies in the United States and Asia that are attempting to turn them into a more serious business.

“There’s a pretty low barrier to entry on these sort of OK humanoid 3D, CGI-ish characters, and the delta between that and anything high quality is very, very large,” Dempsey said. “There are very few that have a clear strategy.”

Despite his interest in it, Dempsey’s still not sure that this particular space will outlive its novelty as a passing fad. But if it does, it could open the door to a whole new medium of storytelling.

“As these things continue to grow and become real storytellers—and I think most of them right now are not very good storytellers—there could be a second economy or second media channel that emerges from that,” Dempsey said, “in some form of a future where these things are interesting because of how they’re created and what they are, and they’re telling actual stories and they actually live among us in some way.”