Cambridge Analytica has been kicked off the network's ad platform 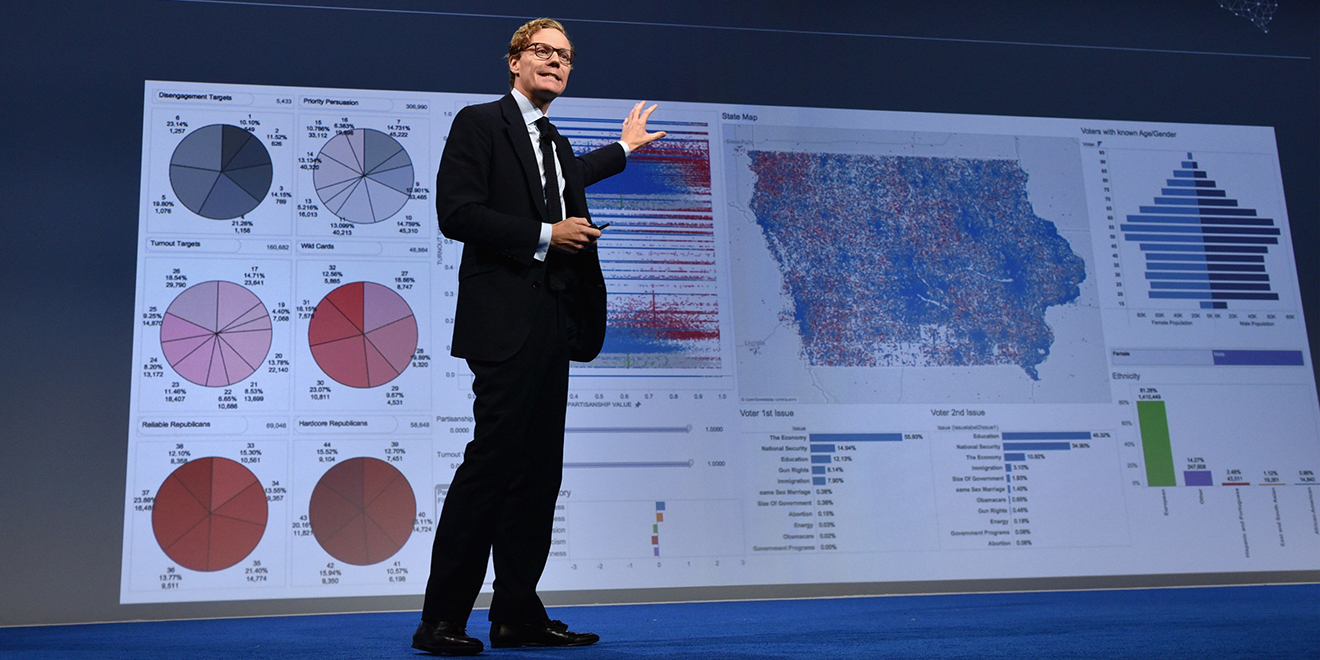 According to Facebook, the researcher provided data to Cambridge Analytica that he had acquired through an app he called “thisisyourdigitallife” that was downloaded by 270,000 users and described as “a research tool used by psychologists.”

Facebook’s announcement came just hours before a report by The Guardian and The New York Times, based in part on extensive information from a Cambridge Analytica whistleblower, reported that the research company “harvested” data about 50 million Facebook users who were linked to those who used the app.

UPDATE: Christopher Wylie, the Cambridge Analytica whistleblower featured in news reports on the data harvesting, tweeted on Sunday that his Facebook account has been suspended:

Suspended by @facebook. For blowing the whistle. On something they have known privately for 2 years. pic.twitter.com/iSu6VwqUdG

In 2015, Facebook allowed researcher Aleksandr Kogan to access its API for an app that, with user permission, collected information about users’ cities, content they liked and additional information based on some other friends. Facebook said Kogan violated its rules by then sharing the user data with Cambridge Analytica.

“Although Kogan gained access to this information in a legitimate way and through the proper channels that governed all developers on Facebook at that time, he did not subsequently abide by our rules,” Grewal, Facebook’s vp and deputy general counsel, wrote in the blog post. “By passing information on to a third party, including SCL/Cambridge Analytica and Christopher Wylie of Eunoia Technologies, he violated our platform policies. When we learned of this violation in 2015, we removed his app from Facebook and demanded certifications from Kogan and all parties he had given data to that the information had been destroyed. Cambridge Analytica, Kogan and Wylie all certified to us that they destroyed the data.”

According to Grewal, Facebook only decided to suspend Cambridge Analytica and SCL after learning a few days ago that the company had allegedly not destroyed the data. Grewal said Facebook is willing to take legal action if further investigations reveal the companies engaged in any “unlawful behavior.”

It’s unclear specifically how the 270,000 app downloads were parlayed into data on tens of millions of Facebook users, though it appears the data stemmed from the social network connections of the app users. A whistleblower within Cambridge Analytica described the data as a “saving grace” for its political research, while the company’s CEO has dismissed the app research project as “fruitless,” according to The New York Times.

Facebook’s blog post and subsequent comments have not addressed the 50 million user total cited by The New York Times and The Guardian in its reporting.

In a statement on Saturday morning, Cambridge Analytica responded to Facebook’s decision to suspend the company from its advertising platform, claiming that it “fully complies” with Facebook’s guidelines and that the company only uses social media platforms for “outward marketing, delivering data-led and creative content to targeted audiences.”

“We worked with Facebook over this period to ensure that they were satisfied that we had not knowingly breached any of Facebook’s terms of service and also provided a signed statement to confirm that all Facebook data and their derivatives had been deleted,” according to the blog post.

Cambridge Analytica also said none of the data acquired was used in service for the Trump campaign.