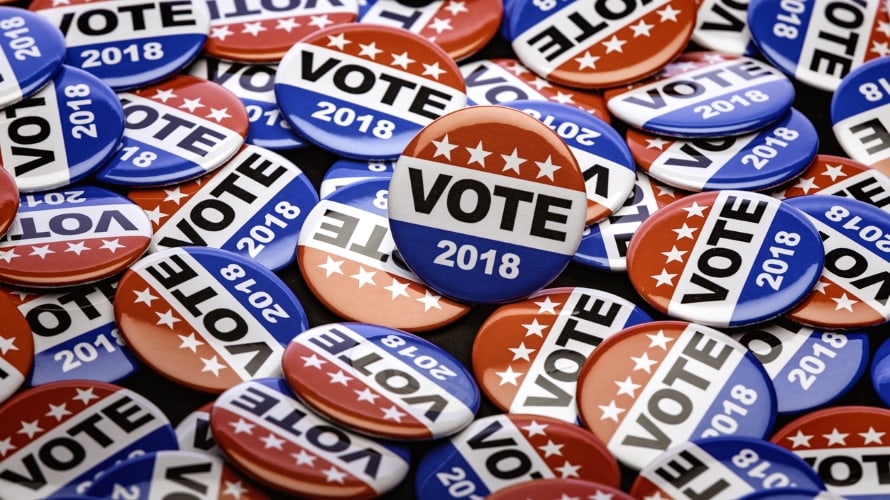 Key midterm elections will be held in the U.S. this November
JasonDoiy/iStock
Share
By David Cohen
|
September 13, 2018
Share

Facebook CEO Mark Zuckerberg penned a lengthy note on Facebook Thursday morning to share his thoughts on the social network’s efforts to prevent interference with elections via its platform.

What has he learned from this entire process? Zuckerberg wrote, “One of the important lessons I’ve learned is that when you build services that connect billions of people across countries and cultures, you’re going to see all of the good humanity is capable of, and you’re also going to see people try to abuse those services in every way possible.”

Zuckerberg stressed the importance of the issues and the challenges in addressing them:

“These are incredibly complex and important problems, and this has been an intense year. I am bringing the same focus and rigor to addressing these issues that I’ve brought to previous product challenges like shifting our services to mobile. These issues are even harder because people don’t agree on what a good outcome looks like, or what tradeoffs are acceptable to make. When it comes to free expression, thoughtful people come to different conclusions about the right balances. When it comes to implementing a solution, certainly some investors disagree with my approach to invest so much in security.”

To remove or not to remove?

Seemingly addressing the controversy over how long it took Facebook to punish Alex Jones and Infowars, without mentioning them by name, Zuckerberg offered examples of pages that removed and those that were allowed to remain on the social network:

“One of the challenges we face is that the content these pages share often does not violate our community standards the rules that govern what is allowed on Facebook. In the example above [referring to fake accounts that were removed, which promoted a legitimate protest event and encouraged others to attend], the event would have been allowed under our policies, as would encouraging others to attend. This was clearly problematic, though, and the violation was that the accounts involved were inauthentic. In another example, a campaign we found tried to sow division by creating both pro-immigration and anti-immigration pages. Again, many of the posts on these pages were similar to posts from legitimate immigration activists, but they were clearly problematic as part of a coordinated inauthentic campaign.”

Zuckerberg touted the benefits of Facebook’s policy that people must use their real names:

“One advantage Facebook has is that we have a principle that you must use your real identity. This means we have a clear notion of what’s an authentic account. This is harder with services like Instagram, WhatsApp, Twitter, YouTube, iMessage or any other service where you don’t need to provide your real identity. So, if the content shared doesn’t violate any policy, which is often the case, and you have no clear notion of what constitutes a fake account, that makes enforcement significantly harder. Fortunately, our systems are shared, so when we find bad actors on Facebook, we can also remove accounts linked to them on Instagram and WhatsApp, as well. And where we can share information with other companies, we can also help them remove fake accounts, too.”

Zuckerberg explained why Facebook put policies into place requiring pages running issue-related ads to undergo a verification process, adding that discussions were held within the company about whether banning all political ads would be the better move:

“One challenge we faced when developing this policy is that most of the divisive ads the Internet Research Agency ran in 2016 focused on issues—like civil rights or immigration—and did not promote specific candidates. To catch this behavior, we needed a broad definition of what constitutes an issue ad. And because a lot of ads touch on these types of issues, we now require many legitimate businesses to get verified, even when their ads are not actually political. Given that the verification process takes a few days, this is frustrating to many companies who rely on our ads to drive their sales. When deciding on this policy, we also discussed whether it would be better to ban political ads altogether. Initially, this seemed simple and attractive. But we decided against it not due to money—as this new verification process is costly, and so we no longer make any meaningful profit on political ads—but because we believe in giving people a voice. We didn’t want to take away an important tool many groups use to engage in the political process.”

Zuckerberg stressed the importance of coordination and intelligence sharing across platforms, as well as with law enforcement:

“First, bad actors don’t restrict themselves to one service, so we can’t approach the problem in silos, either. If a foreign actor is running a coordinated information campaign online, they will almost certainly use multiple different internet services. And beyond that, it’s important to remember that attempts to manipulate public opinion aren’t the only threat we face. Traditional cyberattacks remain a big problem for everyone, and many democracies are at risk of attacks on critical election infrastructure like voting machines. The more we can share intelligence, the better prepared each organization will be.”

He continued, “Second, there are certain critical signals that only law enforcement has access to, like money flows. For example, our systems make it significantly harder to set up fake accounts or buy political ads from outside the country. But it would still be very difficult without additional intelligence for Facebook or others to figure out if a foreign adversary had set up a company in the U.S., wired money to it and then registered an authentic account on our services and bought ads from the U.S. It’s possible that we’d find this ourselves, since there are often multiple ways to identify bad actors. However, this is an example where tighter coordination with other organizations would be very useful.”