Watch This Miniature, 3D-Printed Subaru Race Against a Ton of Exploding Sticks

Quite a feat of RC driving prowess 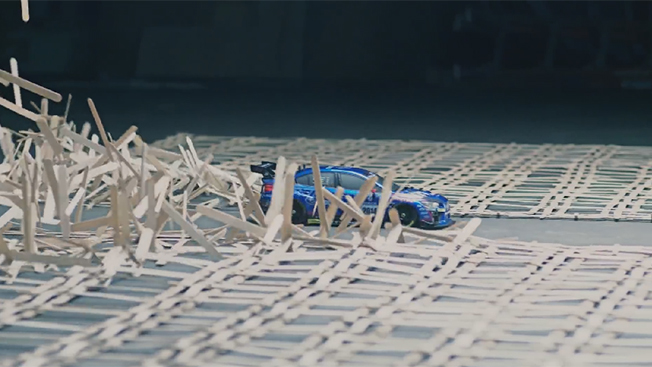 If you ever need to outrun an elaborately exploding array of wooden tongue depressors, a remote-controlled Subaru might just be the vehicle for you.

The brand's two-minute spot, "WRX STI vs. StickBomb" is packed with dramatic visuals of the miniature car drifting around curves and jumping over ramps while the wooden sticks fly into the air all around. It's like Fast and Furious for kids—a playful idea that seems to let the brand hint at the car's street racing abilities without showing off a bunch of dangerous driving scenarios that could land the automaker in court.

It also took an absurd amount of work to pull off, if the making of video below is any indication. For starters, there's the time required to assemble the "stick bomb," a tension-based stick pattern that comes apart in dramatic fashion when a single stick is removed.

Overall the concept is a cool gimmick, though there's not quite enough excitement to drive the casual viewer through two minutes. Even the uptempo music can't always maintain the illusion that something is actually happening.

In the end, it's a pretty compelling ad for an RC Subaru, but I've got bad news: The car was a one-of-a-kind created via 3-D printer just for the ad. So here's hoping all the effort was worth it and moves some of the $35,000 full-size models.