The Story Behind Fidget Cube, the $4 Million Phenomenon You Didn’t Know You Needed

Meet the brothers who made the viral gadget

If your friends know you to be a restless pen-clicker, you've probably already been tagged a dozen times or so on the promotional video for Fidget Cube.

Viewed tens of millions of times across social media thanks to its pickup by viral news sites, the Kickstarter video for Fidget Cube has already generated nearly $4 million from backers for the pocket device—whose designers had only asked for $15,000. And the campaign still has 35 days of fund-raising to go.

Fidget Cube features different tactile doodads on each side, letting you absent-mindedly spin, click, roll or rub the tiny interactive features. It was the brainchild of brothers Matthew and Mark McLachlan, collectively known as Antsy Labs.

We caught up with the brothers to learn more about the campaign. Check out the Kickstarter video below, followed by a Q&A that the two tag-teamed via email:

AdFreak: Where did this idea come from? Are you just really fidgety people, and there wasn't that one perfect thing to fiddle with? Matthew and Mark McLachlan: We both have a hard time sitting still while working. When we're brainstorming, working through a project, or just on a phone call, we almost always are moving around and playing with things at our desks.

When we recognized this, we checked out what tools were available for fidgeting, and we couldn't find any that we'd feel truly comfortable using in a professional setting. In terms of form, most were brightly colored and clearly marketed solely to children. In terms of function, everything that was available typically only offered one or two ways to fidget. We wanted to design something that challenged those two points.

You've done a few Kickstarters in the past. What lessons did you learn from those that you tried to apply to Fidget Cube? With each Kickstarter project we've run, we've picked up pieces of knowledge regarding what works and what doesn't. For instance, we are now more than ever aware of how important constant, honest, and accurate communication is between us and our entire community. 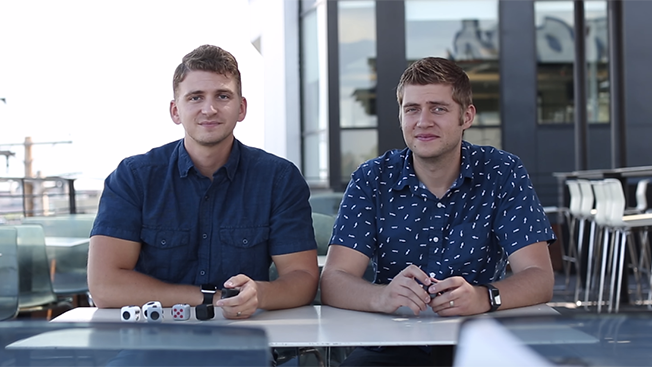 Matthew and Mark McLachlan, creators of the Fidget Cube

Who made the video? Did you have any help? Matthew is the mastermind behind the videography and photography at Antsy Labs. Our wives also helped during shooting for the rooftop part of the video. We wanted the video to not be a typical Kickstarter video. We looked at some of our favorite commercials, and realized they were pieces that didn't feel like commercials at all.

How did you first distribute the video? Where and when did it truly go viral? The video was, of course, first available on our Kickstarter project page. Aside from that, we made it available to our audiences through our Facebook page and YouTube channel. These two peripheral channels brought in what we thought at the time were a considerable amount of views. But the true moment that our video began to spread at an unbelievable rate was when a series of Facebook pages, such as NowThis, shared our content with their audience.

The Fidget Cube video's been all over my Facebook news feed. What's it been like to see your creation becoming a viral star? It's pretty surreal. We've had countless friends and family members message us to tell us that somebody in their network who has absolutely no other connection to us shared the video. Comprehending the size of audience the video has reached at this point is something we have a very hard time doing.

What kinds of unexpected responses have you gotten from people watching and sharing the video? Any feature requests or surprising observations? We've heard just about every suggestion you'd imagine for Fidget Cube—some more feasible than others. One of the biggest requests we've received is to add some sort of keyring/lanyard option to Fidget Cube. We do our best to listen to what our community wants, and we are currently working on a solution that would solve this dilemma while being totally optional and not affecting the aesthetics we care so much about.

Something that has been surprising to both of us is the response we're receiving from individuals with ADD, ADHD, and autism. We had hoped that Fidget Cube would become a tool that people would see value in outside of just being a simple desk toy, and our community has made it known that it will be.

As we speak, you've received well over $3 million, but your goal was only $15,000. Is this going to pose problems for fulfilling all these orders for Fidget Cube? It's no secret that the number of Fidget Cubes we're gearing up to ship in the coming months is far beyond the modest number we had initially planned for. Thankfully, with our increase in orders comes an increase in our ability to ramp up production and fulfillment to levels we wouldn't have been capable of prior to launch.

Of course, the incredible scale of this project does come with its own unique set of growing pains for our team, but we are working tirelessly to get them in the hands of our backers as soon as possible. We will be communicating with our backers regarding delivery dates as soon as we know more specifics.

What's next after Fidget Cube? We both are continually discussing the dozens of ideas we have in our sketchbooks. Even if we launched one or two of them each year, I'm not sure we'd ever run out with how quickly we add new ones to the list. That being said, our highest priority at this time is to make Fidget Cube the best it can possibly be. There'll be plenty of time to introduce our next ideas to our community after Fidget Cube has started shipping.

The Fidget Cube Kickstarter fundraising campaign runs through Oct. 19. You can contribute or learn more on the team's campaign site.