A notorious brand tries to evolve 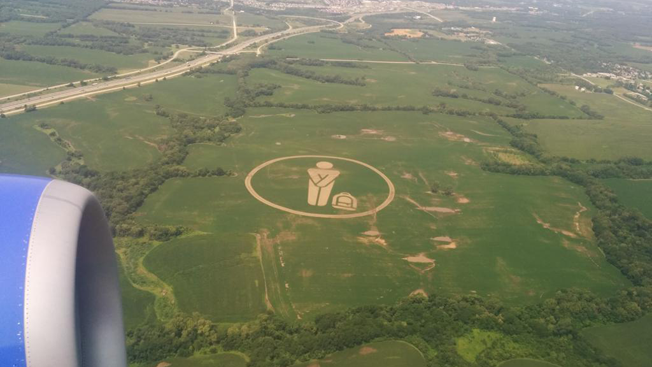 A bizarre crop circle appeared north of the Kansas City International Airport this week, causing a stir in social media. No, there were no aliens or incredibly talented goats involved in this one. The image of a man covering himself was done by ad agency Barkley as part of its work for Spirit Airlines' "Bare Fares" campaign.

Which means no free bag, no free drink, no carry-on luggage. Just you and a personal item (like a handbag or a backpack) origami'd onto a seat (they add extra seats to these flights, so no luck on legroom) for a really, really low price.

Spirit is often a target for hate in social media because of confusion about its unique model (super low fares, but fees for everything, like … water), so the carrier also started the Hate Thousand Miles Giveaway. Check out the video below.

"Air travel can suck. We get it. You wouldn't believe all the hate Spirit gets," the narrator says before singing angry tweets. Funny video, neat campaign, but the high-pitched (fake? real?) voice is grating enough to make me mute it. But maybe you like that. And body contortion, I don't know.

Barkley has been working with Spirit since the end of 2013, and is trying to steer its intentionally controversial marketing in a more productive direction—"provocative with purpose," as the agency says. But Barkley adds: "Spirit's main focus has and will remain heavily vested in PR, meant to drum up earned media without the financial outlay that comes with broadcast or digital campaigns."