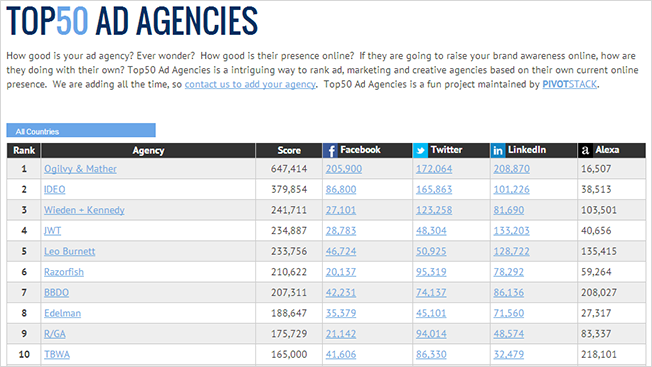 Does Ogilvy & Mather have the best online presence of any advertising agency in the world? Yes, according to a new site that ranks shops based on the size of their social audiences.

Created and maintained by Pivotstack, a tech company that creates software specifically for marketing agencies, the "Top 50 Ad Agencies" list takes into account the number of likes and followers an agency has on Facebook, Twitter and LinkedIn, as well as the traffic to an agency's website, as ranked by analytics firm Alexa.

The leaderboard, so far, is a bit of a surprise.

Design consulting group Ideo is at No. 2, with Wieden + Kennedy taking the bronze. The first historically pure-play digital shop on the list is Razorfish, clocking in at sixth.

The first 100 agencies were drawn from other lists of top shops and the personal knowledge of Pivotstack staff, although the site includes a callout inviting agencies to contact Pivotstack to be added.

Some digital brand names, like AKQA and Huge, are notably absent from the list. But the current version is just a first draft that "might not have hit some of the bigger ones," Michael Koehler, director of sales and marketing at Pivotstack, tells AdFreak. "It's nothing personal against them, and they'll probably be added in the next few months."

The social media numbers for each agency are currently entered manually, but Pivotstack also hopes to automate the update process in coming months. (For example, Ogilvy's Facebook score on the list is currently 205,000, whereas its Facebook page has grown to 215,000 likes.)

The website bills the list as a "fun project" aimed at measuring how well an agency is doing at managing its online presence, hinting how that might speak to its ability to manage a client's. It's also—perhaps moreso—a clever way for the shop to draw attention to itself among its target customers. (It rarely hurts to appeal to vanity or envy in the advertising business).

What about the age-old "cobbler's shoes" argument that agencies might be neglecting their own presences in favor of servicing their clients? Koehler says an agency's online presence is "just a reflection of how well a shop is run" and demonstrates one facet of its abilities. "By no means," he says, "is this supposed to be the definitive list of best agencies in the world."