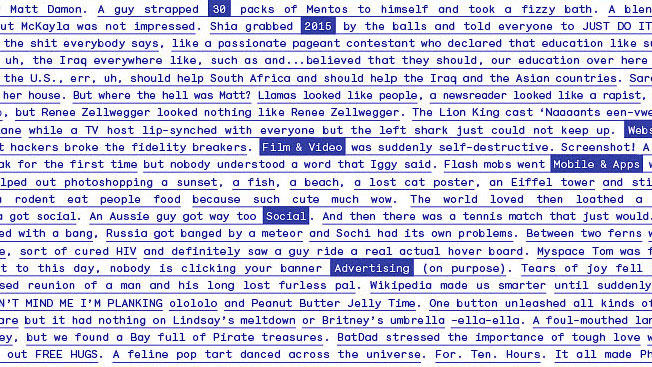 The call for entries for the 20th Annual Webby Awards had to be special. So, the organizer—the International Academy of Digital Arts and Sciences—got 20 Webby winners to create their own versions of it, inspired by the theme "The Internet Can't Be Stopped."

Wieden + Kennedy, NASA's Jet Propulsion Laboratory, Big Spaceship, Code & Theory, Google, Facebook, National Geographic and Pitchfork are just a few of the companies participating. You can check out the submissions from W+K, NASA, Big Spaceship and Code & Theory below. A new work will be featured on webbyawards.com each week, with an interview explaining it. (NASA's JPL is the first to do so, here.) The creators will also take over the Webby Awards social accounts to explain their take on the theme.

"We are honored to be celebrating this significant milestone in Webby Awards history with the enthusiasm and creativity of these 20 visionaries who have played an integral role in shaping the last 20 years of the Internet," said David-Michel Davies, Executive Director of The Webby Awards. "We are excited to share their thought provoking perspectives and designs surrounding the Internet's impact on our daily lives."