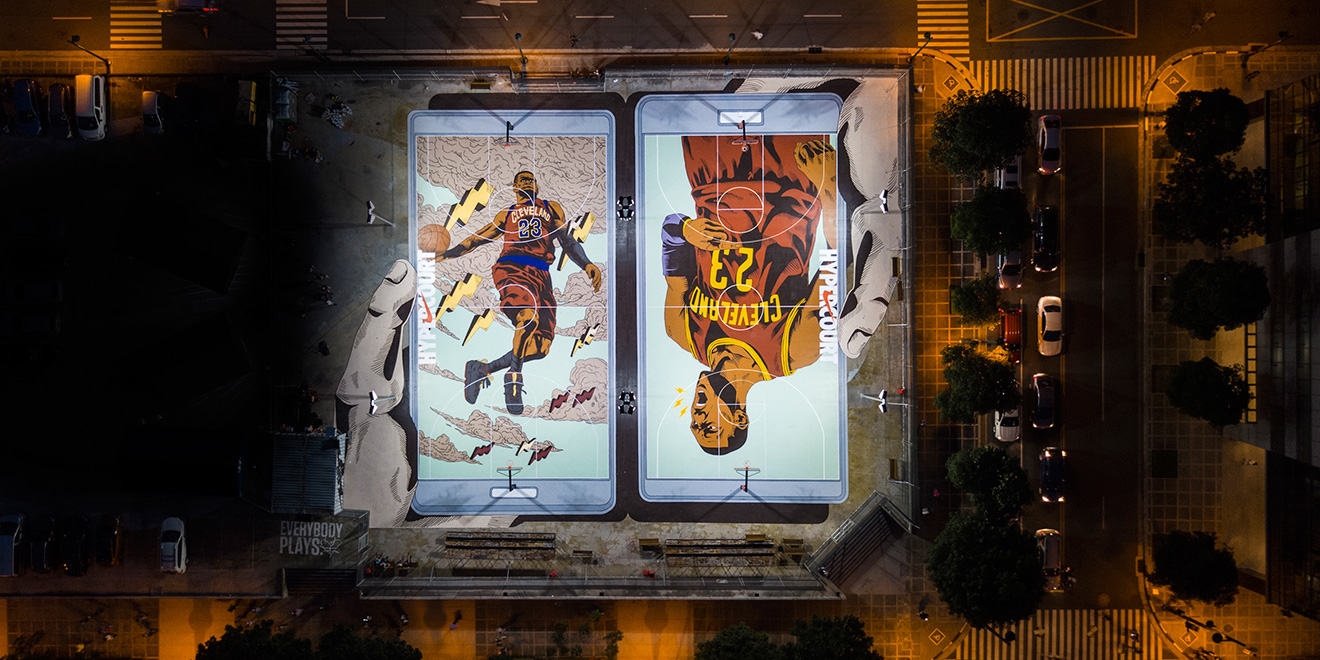 There are five Hyper Courts so far, spread across five Barangays (districts) of Manila. Each has been painted—with portraits of NBA stars LeBron James, Kobe Bryant, Kevin Durant, Russell Westbrook and Kyrie Irving—by Arturo Torres, the illustrator known for his superhero-style illustrations of rappers and basketball stars.

The Hyper Courts feature an on-court digital platform that players can tap into with their smartphones. Without having to use any data whatsoever, players can pull up all sorts of Nike content that will help them with their game—including training drills tailored for different types of players. The more a player uses the platform, the more it learns and makes recommendations.

The Hyper Courts launched at the end of November. They follow another celebrated digital/physical installation that BBH made for Nike last year—the “Unlimited Stadium.”

“Bringing two brands like Nike and Google together has allowed us to deliver a true world first,” said David Webster, managing partner at BBH Singapore. “Nike Hyper Court will be transformational to Filipino basketball, giving millions of kids access to some of the best training available and to help them raise their game.”

“The passion for basketball in Manila is unlike any other city in Asia,” added Nike Southeast Asia & India senior marketing director Bulbul Khera. “We want to inspire young ballers to realize their full potential through the physical and digital aspects of their sport. Nike Hyper Court enables these ballers to train anytime without worrying about access to training drills and data costs.” 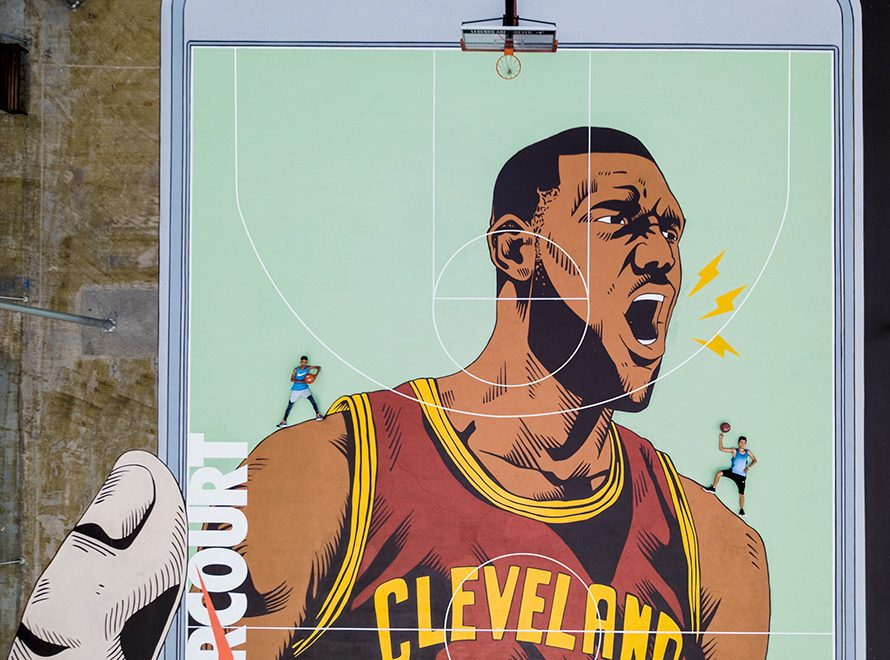 “Collaborating with a great partner like Nike and an innovative agency like BBH was a perfect fit,” said Miguel Andrés-Clavera, Google creative technology lead. “Nike Hyper Court, powered by Google, presents a great example of how businesses can partner with the community to customize technology and provide an original, digital solution aimed at empowering Filipino basketball players and youth across the capital. We are excited to see Nike Hyper Court use Google’s technology to change the game. This technology allows for endless possibilities on and off the court.”

Torres’ artwork is exceptional. The American artist, based in Texas, who grew up in shelters, was drawn to Nike’s aim of nurturing and inspire young people. “I came from a childhood surrounded by domestic violence, in a tough neighborhood. But to look at myself and know that I’m not a statistic when I could’ve been, should’ve been, that’s amazing. I’m proof you can make it out, you can have a better life,” he said. 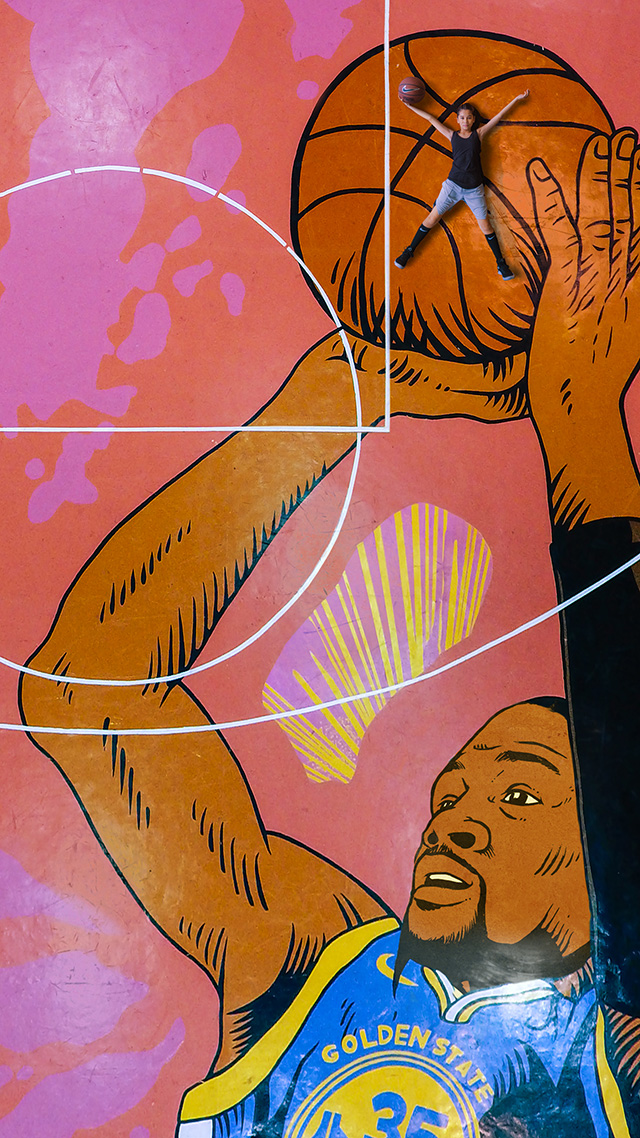 “To know that my art can contribute to something like that, that maybe a kid here in the Philippines can feel excited about playing on that court because of something I drew and that helps him become the next LeBron or Kobe, that’s incredible. I just want to be the best I can be and inspire kids to be better. That’s my goal—for kids to be better than me.”

Torres had this to say about his five court designs:

“KD is filled with energy. That’s why I gave him rays. This guy is seven foot and he can play any position. Kyrie moves around people so fast that’s why he’s got the wind going against him. Lebron is a freaking God—I wanted him to be like Thor, so a flying superhero with lightning bolts it is. And then there’s Kobe. He’s always in control with those ball handling skills. That’s why he’s got smoke under him. Then there’s Westbrook. He’s a living volcano. Get out of his way or get run over. I put him in fire and lava.” 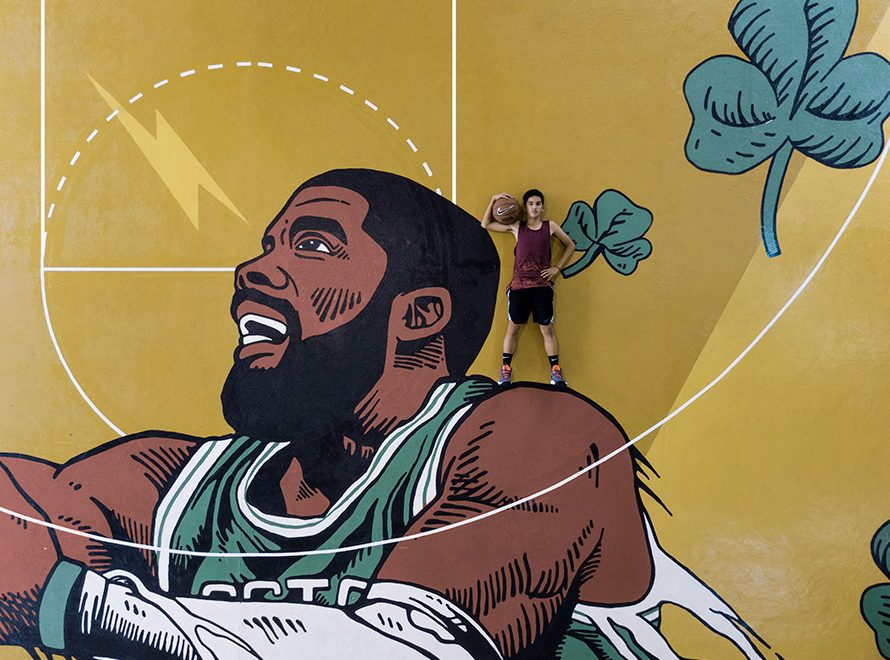