In franchise's 'Legion' title, every character is playable 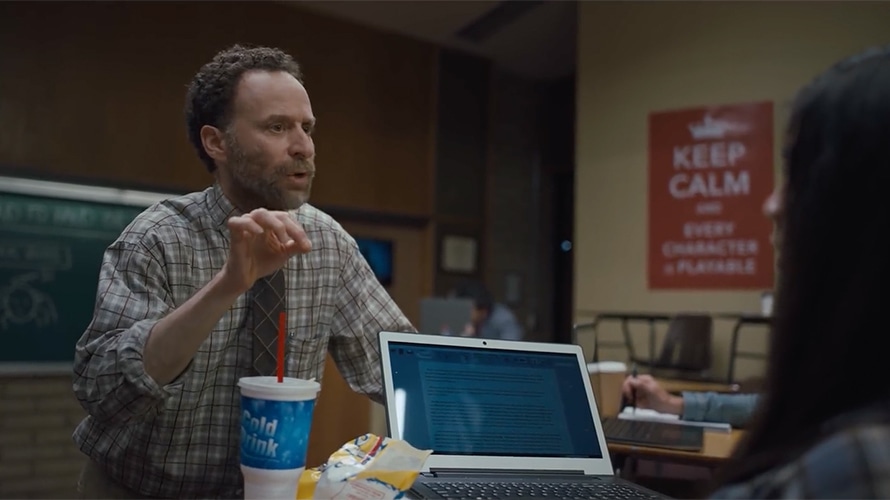 To prime consumers for the game, the agency enlisted Glaser and Dover for a five-minute NSFW “Classroom 101” ad.
Ubisoft
Share
By Gabriel Beltrone
|
June 21, 2019
Share

There are only so many ways to market a dystopian action-adventure video game—at a certain point, live game-play trailers and trope-heavy end-of-the-world storylines can blur together.

But for the launch of “Watch Dogs: Legion,” the third title in Ubisoft’s “Watch Dogs” series, agency Funworks zeroed in on an unusual aspect of the game. Rather than tying players to a single protagonist, “Legion’s” open-world style lets them recruit any of the almost 9 million characters into a playable team of “hackers.”

The spot trips over cringe-inducing teacher-student fantasies via moments of extreme absurdity—the apparent aphrodisiac for Glaser’s character is Barb’s description of the exaggerated violence she played out in the video game the night before—and the result is all kinds of awkward.

Asked if there were any concerns about portraying a romantic exchange with an implied power imbalance, the agency deferred to the client.

“This ad was meant as a sarcastic and humorous way to highlight an innovative feature of the game and the professor’s reaction to the student’s mission description was intended to be completely ridiculous and over the top,” a spokesperson for Ubisoft said.

Read on for a quick chat with Funworks creative director Craig Mangan on the campaign and how it came to be.

Adweek: How’d you come up with the classroom 101 concept?

Craig Mangan: The “all playable characters” is such a mind-blowing gaming innovation, we had a lot of explaining to do, and we thought it would be hilarious if there was an entire college class to explain this concept and the rest of the game. The Ubisoft team loved the 101 concept, and thought it had the best chance of being a great, long-lived campaign across multiple touchpoints.

Why is “all playable characters” an important unique selling proposition for the game, and the right focal point for the ad?
Almost every video game ever made has had NPCs, or non playable characters. These characters help tell the story and guide the player. “Watch Dogs: Legion” is the very first game where the player can play any of the millions of characters in the entire game. It’s an incredible innovation. Strategically, players can discover, recruit and play as anyone they think is right for the mission.

How’d you approach scripting this? Is any of it improvised?
There is a lot of game information and footage that had to be said. We had a writers room to concept different character types that could bring the information to life in funny ways and then wrote a very solid script. In the end, the script was 95% of what’s in the video, but it’s the amazing casts’ interpretations and reactions that make it fun to watch.

What about casting it—what made Glaser and Dover each the right fit?
Glaser was our first choice for the instructor from day one. He’s one of the funniest people we know, and we knew if we could get him, then we were 90% of the way to having something really funny. Beth was a surprise in casting. We were originally looking for something totally different. But she was really magnetic, and we thought that her and John would pair really well.

What can we expect to see from the other upcoming videos in the campaign?
It’s been a dream scenario landing this cast. The scenario seems to be working. But now that we’ve set up the dynamics between the characters, we’ll be going a little deeper on their relationships and the other great features of the game. The professor and Barb will definitely be exploring each other more.