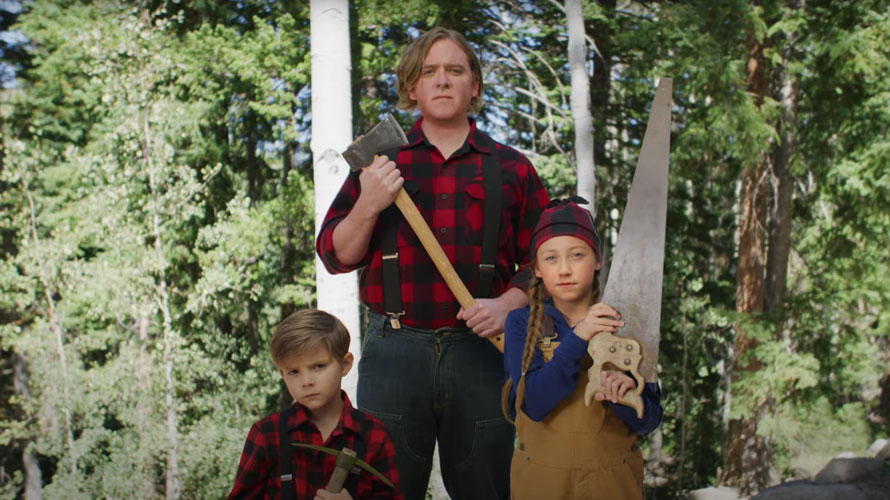 If one wants to illustrate “hearty,” then the lumberjack/forest milieu is certainly one way to go. For pancake mix maker Kodiak Cakes, a big bear and plenty of beards in the Harmon Brothers’ short film for the brand lands right in the sweet spot.

The Utah-based social media ad agency previously brought us the infamous Squatty Potty campaign and the recent “Poop to Gold” giveaway. This time, the Harmon Brothers worked with a very real 1,300-pound Grizzly bear, all to make a short film about how the pancakes are healthy for the whole family.

The two-plus minute film focuses on a lumberjacking family, clad in flannel and all sporting thick beards at one point, including the children. They share their log cabin and surrounding woods with Fluffy, a giant Grizzly.

The spot starts with the mother trying to feed her reluctant children a normal breakfast. But she encounters a problem all parents can relate to: the kids are too picky. As the mother threatens to have Fluffy feed the kids scrambled eggs, she comes up with a better solution: protein-rich Kodiak Cakes, made with whole grain and non-GMO ingredients.

A clever mix of reality and CGI

The “Simplify Your Life” campaign for the family-run food company, also from Utah, highlights the notion that healthy eating doesn’t have to be a chore. The ad drives home the point by suggesting healthy food can actually taste really good, even to the pickiest eaters.

Like other work from Harmon Brothers, one needs to pay attention—and likely rewatch the film for some of the quick-hit levity the agency is known for. The bear in the ad is very real, yet the sight gags with the hulking creature are cleverly CGI. Thankfully, the kids aren’t really high-fiving Fluffy, bringing the mom the morning paper, nor doing log presses with the son, and he’s not really roaring at the breakfast table.

“We’ve done some incredible things in our careers, but renting a zoo and working with a 1,300-pound Grizzly was on a whole new level. This was a tremendously hard ad to create, but we believed in the creative vision and knew the ultimate product would be memorable, remarkable, and effective,” said Daniel Harmon, chief creative officer at Harmon Brothers.

The campaign will run on social channels, including the Kodiak Cakes Instagram page.