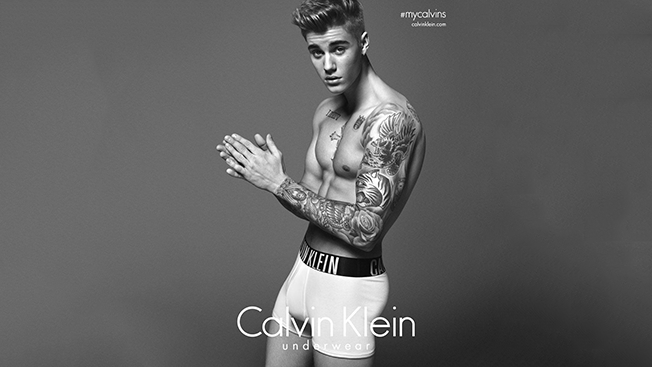 UPDATE, Jan. 10: Justin Bieber's team insists the unretouched Calvin Klein photo below, showing a scrawnier, less well-endowed Bieber, is fake. The photo was posted to BreatheHeavy.com, but after getting a cease-and-desist letter, that site has now removed it and published a retraction. "Bieber denies the photo is real, and I respect that and will believe him," the writer says.

See our original story below:

Well, it looks like Justin Bieber's controversial Calvin Klein ads aren't quite what they seem.

When Bieber's ad campaign launched earlier this week, the Internet went wild over how chiseled (and fake) his body looked next to model Lara Stone. The pop star has apparently spent years preparing for the campaign, telling Women's Wear Daily, "It's always been a dream. Last spring, I posted a picture on Instagram in my underwear, using the #mycalvins tag. Thankfully the brand saw it and liked the reaction it was getting, and a relationship started from there."

As you can see, CK bulked up the pop star's biceps, torso, chest and ahem—package—pretty significantly. Bieber's head was also scaled down to fit the new buffed-up body. Yes, in this campaign, Justin Bieber has less of a big head.

BreatheHeavy.com's photo came from a source who claims Bieber was a pain to shoot the spot with. "He was basically a douche," the source told the pop music site. "He hit on Lara several times, and she had to stop him, basically calling him out on being just a child."

While Photoshopping is nothing new to the fashion industry, it's come under quite a bit of scrutiny lately. In August, Modcoth vowed to do away with the photo-retouching tactic when it signed the "Heroes Pledge for Advertisers" petition. And when American Eagle-owned Aerie decided to ditch Photoshopping last year, sales went up 9 percent.