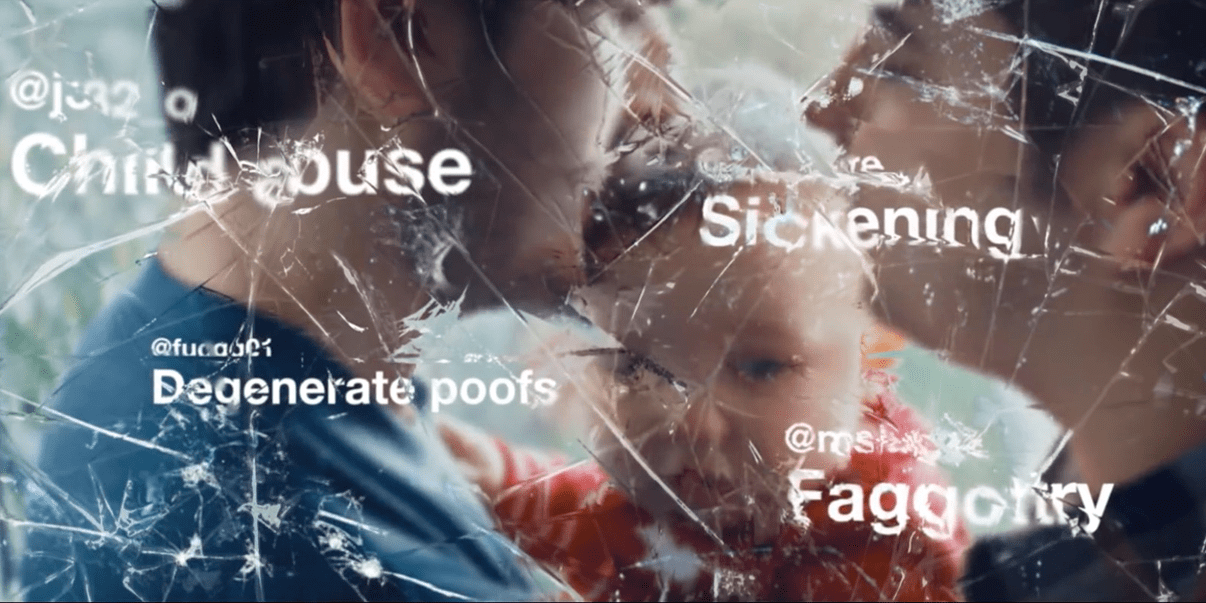 It appears as though even the actors who star in ads for mundane products like frozen potatoes aren’t spared from cyberbullying and attacks from internet trolls.

To draw attention to just how widespread online abuse has become, British broadcaster Channel 4 has teamed up with a trio of brands to highlight the issue. In a three-and-a-half minute video, three ads that have run in the U.K. over the past few years are shown back-to-back—except this time, each ad is overlaid with the nasty remarks left by commentators online.

First is a promo for financial services company National Building Society that features a performer who goes by the name SugarJ Poet. As he begins to recite his poem, comments like “looks like a gorilla” and “smug talentless amoeba” begin to appear on-screen. For added effect, a mold-like substance infiltrates the screen as the crude comments build up.

Next is an ad for candy brand Maltesers that features a woman with a disability telling a funny story about accidentally tripping a bride with her wheelchair during her wedding reception. As she recounts the story to two friends, comments calling her “disgusting, freakish and awful” begin to pop up, and the video becomes increasingly fuzzy and hard to make out as the commentary worsens.

The last ad in the compilation is from McCain, a British company that sells frozen potato products. The video, which features a real-life gay couple and their child, comes to a screeching halt when the two men are seen kissing and holding their baby together. As a still image of the couple has glass thrown at it, comments such as “degenerate poofs” and “child abuse” fill up the screen.

Interspersed throughout the haunting video are facts and information about online abuse from Channel 4, which is pushing a message of diversity and inclusion via this effort with the hashtag #TogetherAgainstHate. According to a study cited by Channel 4, roughly 40 percent of young adults have seen racist and homophobic abuse, bullying or harassment online.

The broadcaster, along with Nationwide Building Society, Maltesers and McCain, is hoping the campaign will “encourage viewers to consider the impact of divisive and hateful comments online.”

The ad debuted last week during the first episode of the new series of Channel 4’s “Gogglebox” reality show. Creative for the campaign was handled in-house by Channel 4’s creative team PL4Y—which is part of the broadcaster’s advertising arm, 4Sales—and London-based agency The Outfit.

“As social media has grown in popularity, so too has the environment in which more and more people feel it is acceptable to make vile, threatening and abusive comments,” said Matt Salmon, Channel 4 head of agency and client sales. “This unique brand collaboration highlights this important issue and demonstrates Channel 4’s commitment to championing diversity beyond our programmes whilst building on 4Sales’ industry-leading reputation for delivering original and creative ad campaigns.”