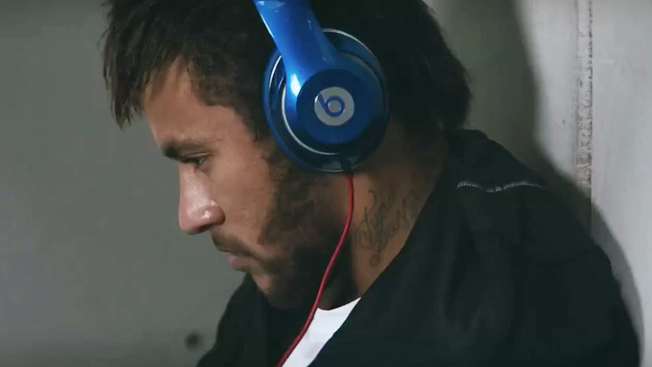 Good lord, Beats by Dre is getting great at sports commercials.

We wrote at length last month about how the music company and ad agency R/GA have teamed up to make some of the year's best sports ads—with Kevin Garnett, Colin Kaepernick, Richard Sherman and Cesc Fabregas. But nothing could prepare us for this five-minute World Cup extravaganza. It's about pregame rituals, yes, but Beats is proving to be surprisingly adept at all aspects of the sports ad game—which at times like these is supposed to be the purview of Nike and Adidas.

The top star in "The Game Before the Game," fittingly for this World Cup, is Brazil's Neymar Jr. His pregame ritual involves talking to his father, whose pep talks are so inspiring, you'd think an agency copywriter wrote them (well, yeah). Among the other stars featured here: Spain's Fabregas, who kisses the ring his girlfriend gave him exactly four times; Uruguay's Luis Suarez, who kisses the tattoo on his wrist of his son and daughter's names; and Mexico's Javier "Chicharito" Hernandez, who prays on his knees as his father taught him. (Elsewhere you'll see Bacaray Sagna, Bastian Schweinsteiger, Blaise Matudi, Daniel Sturridge, Jozy Altidore, Mario Gotze and Robin Van Persie.)

There are also many, many cameos by nonsoccer players—everyone from LeBron James to Lil Wayne to Nicki Minaj to Serena Williams—which lends a very Nike-ish vibe. The latter's grand World Cup spot this year sneaks in Kobe Bryant, Jon Jones, Anderson Silva, Irina Shayk and even the Incredible Hulk.

Being a music company, Beats can also get away with making its ad basically a giant music video. The stars just slip their headphones on, and away we go. (Indeed, the director here, Nabil Elderkin, is known for his music videos.) Jimmy Iovine is known to handpick the tracks for the Beats ads, and here we get the thematically apt and swagger-filled "Jungle" by Jamie N Commons & The X Ambassadors.

The concept precludes in-game footage, but you don't really miss it. It could do with a dose of humor, maybe. But throw in some risqué moments (girl on top at 3:02!) and some globe-trotting glimpses of obsessive fan antics (love the British woman's 1966 tattoo), and you have an impressive smorgasbord of hype, hysteria and hero worship.

Back in 2010, Nike claimed to be writing the future. But who knew the future would include such a determined usurper as Beats?

Credits below, along with some great movie-style posters from the campaign.