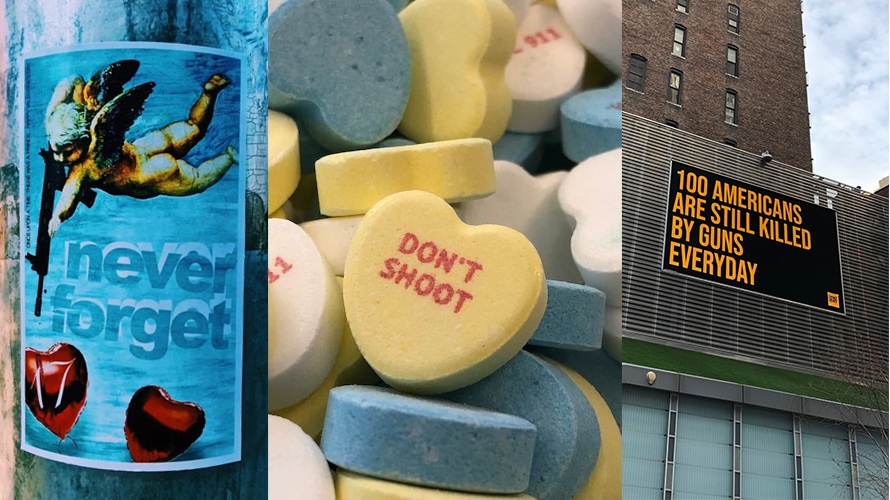 The most visible of Change The Ref's activations is a giant Valentine’s Day mural on 29th and 6th Ave.
Change The Ref
Share
By Erik Oster
|
February 14, 2019
Share

A year after the Marjory Stoneman Douglas High School shooting took the life of their son, Joaquin, Manuel and Patricia Oliver wanted to be anywhere but at home in Parkland, Fla.

“When [Manuel] talked to me about Valentine’s Day, he said, ‘I don’t want to be home, mourning. I want to be active and I want to be fighting, doing the opposite of what everyone else is doing,'” creative director Susan Levine, who partnered with the Olivers’ Change The Ref gun reform activism organization on its Valentine’s Day project, explained.

“We don’t like to call it an ‘anniversary,'” Manuel said, because “it’s pretty far” from the positive ‘connotation of celebration’ associated with the word. “We decided to make a statement and take advantage of the spotlight.”

Change The Ref launched a series of activations today, the most visible of which is a giant Valentine’s Day mural on 29th and 6th Ave. The initial painting for the mural was completed on Feb. 5. Until now, all viewers could see was an ordinary Valentine’s Day greeting, with a cupid flying above a balloon and the message, “You stole my heart.”

That message took on new meaning with the completion of the mural today. The cherubic cupid now holds an AR-15, and a “17” has been added to the balloon to represent the 17 victims of the Marjory Stoneman Douglas High School shooting.

Beneath the mural is a screen that displays progress made on gun control in the last year and statistics showing how much further we have to go.

Manuel said he hopes viewers’ come away with an understanding that “they don’t have to be in Patricia’s shoes if they’re mothers or in my shoes if they’re fathers. Go ahead and do something, because you could be the next victim, or your kid, or your mother or your girlfriend.”

The project was four months in the making. After coming up with the original concept, Manuel and Patricia reached out to creative director Susan Levine, who worked with OOH agency Colossal Media.

"I don’t want to be home, mourning. I want to be active and I want to be fighting, doing the opposite of what everyone else is doing."
-Manuel Oliver

The initiative has been in the process for around four months, when the Olivers reached out to Levine for help to bring the original concept to fruition. Levine met Manuel last spring, when she was working on the “Face2Face” project confronting attendees of the NRA convention in Houston with images of gun violence victims. Levine in turn reached out Colossal Media to help bring the concept to life.

It originally started as a sticker featuring the image and the phrase “Never Forget.” Those stickers kicked off a round of activations yesterday when 6,000 of them were distributed around the country to be put up by student activist group March For Our Lives. Manuel said he was inspired to create the stickers from a street art tour in London.

A press conference for the mural today included Patricia walking the press through a summary of Change The Ref’s activations in 2018 and a look ahead.

“I think the main message is that everybody should be involved,” Patricia said.

Change The Ref also passed out a package of Valentine’s Day heart candies featuring messages like “Don’t shoot” at the press conference. The packaging for the candies reads, “As you enjoy your Valentine’s Day, remember, remember Joaquin Oliver and the 40,000 people who have lost their lives to gun violence in the last year” before inviting recipients to “be part of the change” by contributing to Change The Ref.

Also passed out to members of Congress today were 500 greeting cards with the phrase “You stole my heart,” the graphic from the mural and a message from Patricia pleading with readers to remember her son the next time they discuss gun violence. “They will only pass and approve what we demand them to approve,” Manuel said. “We need to reach that point.”