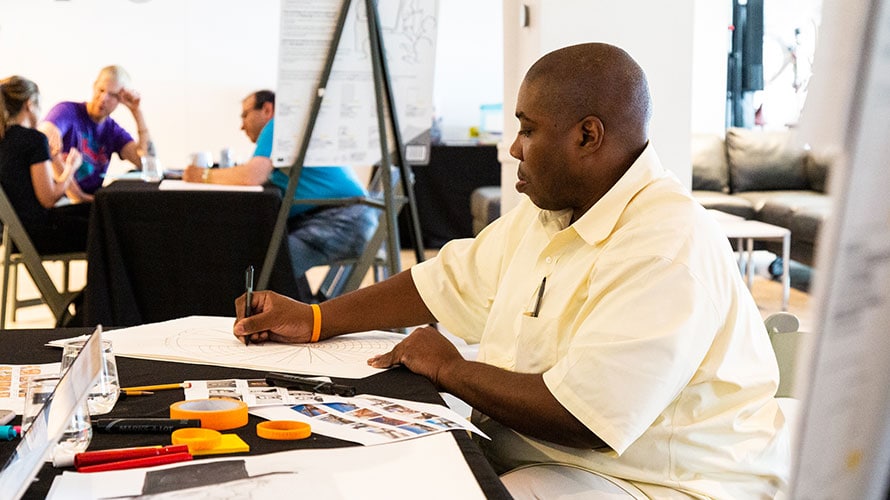 LAND artist Robert Latchman focused on representations of the Brooklyn Bridge. The One Club/Alison Bourdon

Carlo Daleo skipped a job interview to participate in a special workshop with industry creatives in New York.

Daleo was one of four artists from LAND Studio & Gallery, a day habilitation program for artists with developmental disabilities. Each of the artists teamed up with two other people from BBDO, Edelman, McCann Health or R/GA to create 15-second public service announcements of their choice. Over three days, the teams of three finessed their ideas, built storyboards and pitched their concepts to an industry panel.

Daleo’s presentation, “Martinis and Mistakes,” featured two main characters he had created in the past—a disgraced police officer with a drinking problem and a helpful ostrich—to raise awareness about breaking the law on the job.

Daleo sketched his characters out as part of his PSA.
The One Club/Alison Bourdon

The four pitches, which covered depression, the Bump-it and the Brooklyn Bridge, were part of PSAs Gone Wild, a new initiative from The One Club for Creativity’s global inclusion and diversity programming. The idea came from Jesse Suchmann, a One Club member and executive creative director at Edelman who had previously helped his younger brother Sam, who has Down syndrome, make a zombie movie. The movie received nationwide attention, hitting select theaters and landing the Suchmanns on Conan in 2016.

“It was this awesome experience,” Suchmann said. “I brought in all my friends from my creative industry to really make it. As a creative process, it was really mind-blowing because it was a different creative collaboration than we’re used to.”

As a result of the movie’s success, Suchmann’s brother was invited to be a part of a PSA, but he was not involved in conceptualizing it. So, Suchmann worked with The One Club to recreate the magic of collaboration involving artists from the beginning.

Daleo’s teammates were awestruck at how their own perspective started to shift during the creative process.

“It’s good to open your mind to possibility. Carlo’s definitely humbled me,” said Rowan Mansfield, senior copywriter at R/GA, of his teammate. “It’s been an eye-opening experience to get outside your own head.”

It also helps the LAND artists feel like they are a part of something outside of themselves.

“The legitimacy of something like this is always great. It’s the best in the field working with the best in the field,” said Matthew Bede Murphy, LAND co-founder and curator. “It’s interesting to see how the blending of different professions happens. The ad world looking at this wellspring of creative info … [it’s a] great new way to look at creativity in general.”

It’s Daleo’s dream to work for an agency. He thought his power presentation, which showcased his storyboard and featured a live voiceover, went well. Murphy’s hope is that eventually, the artists will find a career in the industry or at least work together again.

“This is the start,” said Kevin-Swanepoel, CEO of The One Club. “I’m hoping next year, there are two or three.”

"It's a reminder the more diverse the team, the better the outcome and creative output—always."
Joanna Crean, creative director at R/GA

As Joanna Crean, creative director at R/GA, put it, “It’s a reminder the more diverse the team, the better the outcome and creative output—always.”

The panel of agency and production company representatives will review the work and decide if they want to produce one or more of the four PSAs. Either way, it was a “very good” experience for Daleo, especially to share his characters, he said.

“I waited a long time for [Elliott the Ostrich] to be rebooted,” Daleo said. “I learned being a creator is hard work and requires concentration. I want to do the best I can.”