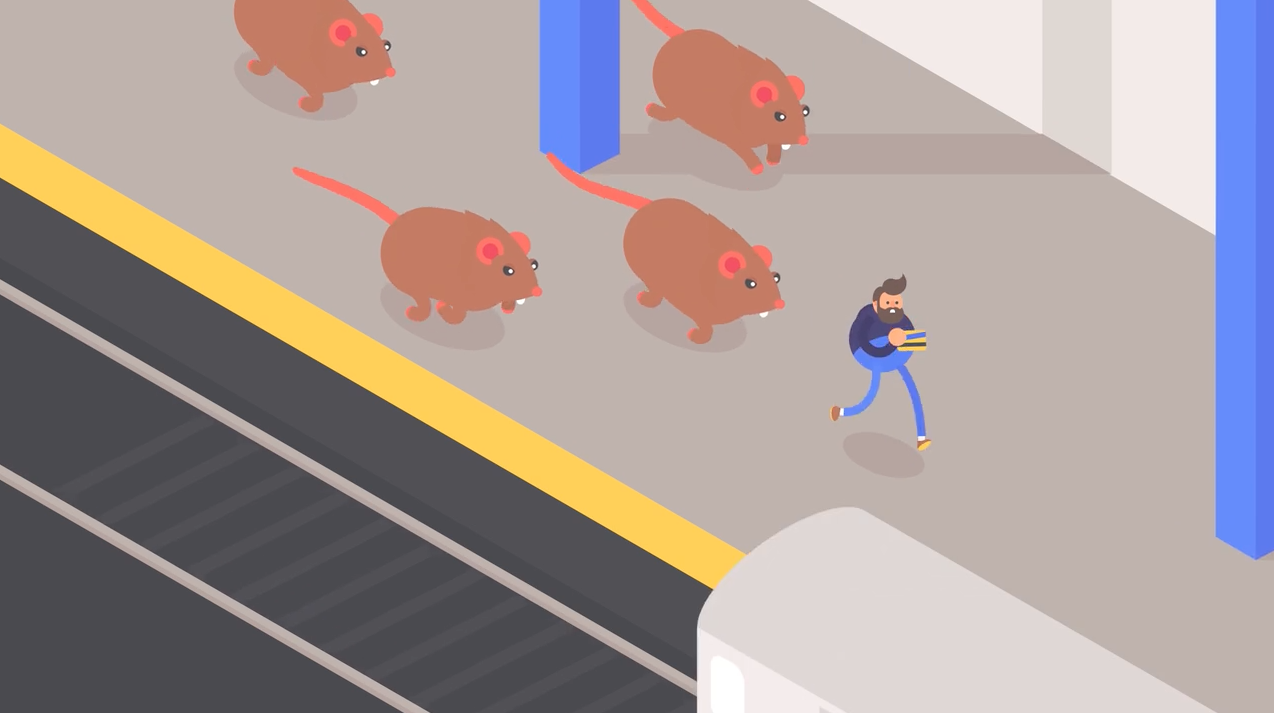 Medieval armored knights riding ancient Egyptian sphinxes might be the perfect visual metaphor for New York City's Metropolitan Museum of Art. And that is among the highlights from this fun project by one London animator, who transformed the Big Apple—and some of its most famous landmarks—into clever GIFs.

James Curran visited NYC for a month last year, and made a mini-loop commemorating each day. Now strung together in a new video, they make for a rich little journal of his experiences here. Titled NYC Gifathon, the vignettes feature playful takes on a range of classic rituals, like eating pizza in Little Italy, or visiting the Empire State Building, with a special nod to King Kong.

The video opens with a smirking critique of traffic on Marathon Day. But Curran's perspectives on the city's museums are among his best—he chases a donut down the Guggenheim's spiral ramp, and walks, Picasso-faced, through splattered paint at MoMA.

The way in which he portrays the city's subways, and then parks, is surprisingly entertaining as well (if perhaps a bit hyperbolic). Even the more mundane days display endearing wit, like a perfect sequence of a guy pumping dumbbells made of hamburgers and taking a bite on each rep (evocative of Popeye).

Only a couple of the GIFs devolve into more niche or opaque territory, as when Curran spends time at Casey Neistat's social video startup Beme, or mashes up into a single clip his visits to both a space shuttle on the museum ship USS Intrepid and to the Central Park Zoo to feed the penguins.

A clip of the Statue of Liberty waving a French flag, meanwhile, offers a more somber tribute to the Paris attacks on Nov. 13.

Curran first rolled out the GIFs on Tumblr under the umbrella NYC Gifathon, one each day, while in town. (Motionographer has more detail on his process.) They work nicely in sequence. Curran mainly featured an army of caricatures of himself, which helps adds continuity and personality to the whole.

They could even work as a neat little tourism ad, though they do include a little snark (the New York Knicks getting schooled by the Miami Heat) and gloom (falling through puddles on the Brooklyn Bridge). Alas, they're still way too cheery to represent what it's like to actually to live here. Nobody has time for a spa day.

Check out the individual GIFs below.