Alligator, Space Invader: The Many Faces of David Bowie in Advertising

Which one was your favorite? 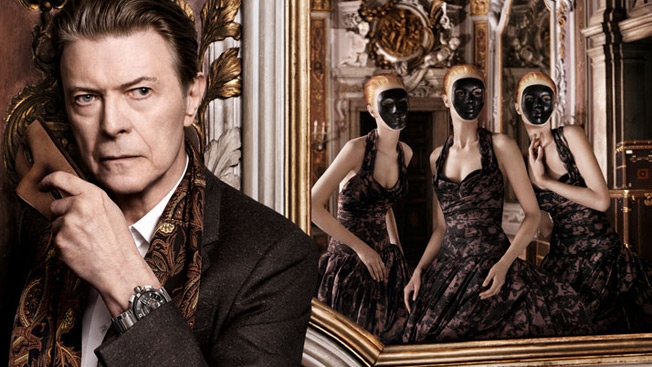 In losing David Bowie, we lost an avatar. But you knew that already.

Here's a retrospective of Bowie's many appearances in advertising, which are as diverse as the man himself. His close relationship to the industry is also satisfyingly personal: Before blowing our minds just like he thought he would, Bowie spent a year at Nevin D. Hirst Advertising as a commercial artist in training. So simmer in that warm tidbit, which ties us ever closer to the Diamond Dog, as we take a reverse-chronological meander through his ad appearances.

Just to get it out of the way, we'll start with Bowie's 2013 appearance in Louis Vuitton's "L'invitation au Voyage" campaign, where he plays "I'd Rather Be High" on a harpsichord for model Arizona Muse, who can't seem to decide if she's staying or going. While lacking in substance or any coherent story, it's beautiful to look at and will ease you nicely into the progressively more-pixellated entries in this little collection.

Glad that's over with. Now we can move onto other stuff, like this piece for XM Satellite Radio—hey, remember that?—which also features Ellen DeGeneres and Snoop Dogg. Even when Bowie is sharing the screen, he steals the spotlight (among other things). Work by Mullen.

Next up is our favorite, for French water brand Vittel by Ogilvy & Mather Paris. Manifesting the tagline "A new life every day," Bowie wanders around his house and encounters different variations of himself, including Aladdin Sane, the Thin White Duke, Ziggy Stardust, the Scary Monsters Clown and the delightfully creepy Diamond Dog. (It's basically the ad equivalent of this GIF by Helen Green.)

The piece was timed to coincide with the release of Bowie's "Reality" album in 2003, and was reused to promote the album in English-speaking markets. Because that's just how good it is.

Flash back to 2002. Hey, it's XM Satellite Radio again! In another piece by TBWA\Chiat\Day, Bowie falls through the roof of an unsuspecting lady's motel room like a crooked angel from Paradise Lost.

Remember when Pepsi was pop's top wingman? In 1987, BBDO conceived of this deliciously Weird Science-y piece featuring Bowie, Tina Turner, electrical explosions and boxy suits to the tune of "Modern Love."  The ad was pulled in light of his sexual assault charges that year. The charges were eventually dropped.

In 1980, Bowie, resplendent in white and at the height of his androgynous powers, played "Crystal Japan" for a mysterious listener, whose back is turned to the camera, in an ad for Crystal Jun Rock Sake.

We've made it to the end of the line, kids. In 1967, shortly after his stint as an adman and before grafting himself onto the public membrane, Bowie appeared in this delightfully weird psychedelic popsicle ad, directed by another guy you'd later hear a lot about: Ridley Scott.

Relish in this piece of history, even if you can't see jack shit, because, if nothing else, it's like peering through a periscope that transcends space/time.

People are always saying you should build a singular personal brand, an at-a-glance elevator pitch that others can grasp by skimming your Facebook. In contrast, Bowie stood out as a celebration of our many faces: Masculine and feminine, glamorous and quirky, intellectual and playful. He was proof that embracing pluralities doesn't dilute you; it accentuates you.

Even though this isn't an ad, we'll wrap up with "Lazarus," the music video Bowie released last week for his new album "Blackstar." If his battle with cancer, and consequent death, was a surprise to you, this piece tells he knew what was coming. And even in this last farewell—this unsettling, tragic and humorous manifestation of a loosening mortal coil—you can still see the Stardust in him.