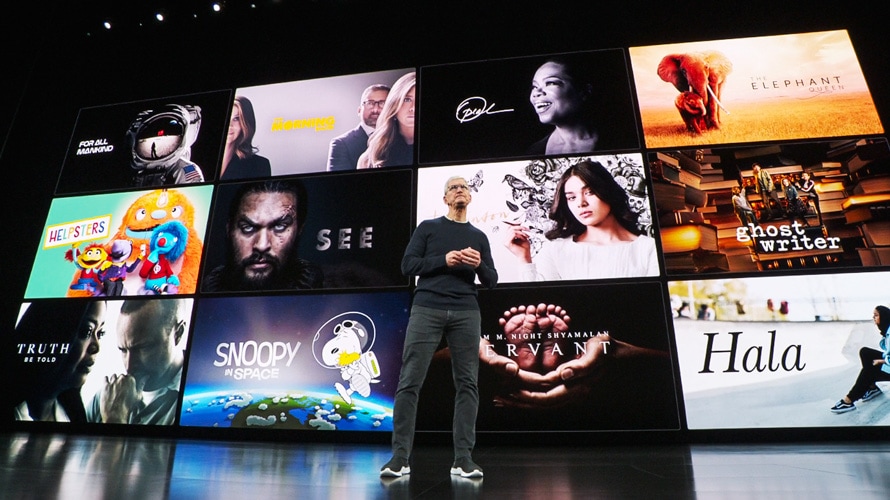 “That’s all of these incredible shows for the price of a single movie rental,” Cook said. “This is crazy!”

Apple TV+’s price point is lower than the previously rumored $9.99 a month. It’s also the lowest-yet price point yet for a major streaming service: Hulu’s cheaper ad-supported television tier costs subscribers $5.99 a month, and Disney+, the anticipated Disney streaming service set to debut in Nov. 12, will cost $6.99 a month for an ad-free viewing.

The service will be entirely free for a year for people who purchase new Apple hardware, Cook said, indicating that the service seems intended to serve as an additional incentive for customers to stay loyal to Apple products or make the switch to Apple hardware.

Apple has invested a reported $6 billion in making original content for the service, which does not appear to contain any library titles, unlike its streaming rivals. During an event in March, Apple first rolled out a first look at its Apple TV+ programming.

During the event, Cook said that trailers for the previously announced original titles have been viewed more than 100 million times. The trailer for The Morning Show—a drama series about a morning television program starring actors Jennifer Aniston, Reese Witherspoon and Steve Carell—has become one of the most-watched trailers for new television programming, Cook said.

“The reaction to these trailers has been incredible,” Cook said.

On Tuesday, Apple also released a trailer for See, an upcoming drama series starring Jason Momoa. The series takes place in an apocalyptic future where most humans have lost their sense of sight.

Apple TV+’s launch titles include See, The Morning Show, Dickinson (a coming-of-age story about Emily Dickinson), sci-fi drama For All Mankind, children’s series Helpsters and Peanuts original Snoopy in Space. These shows will be available in November, along with an undetermined project from Oprah Winfrey, who will create “a vibrant, global book club community and other projects to connect with people around the world and share meaningful ways to create positive change.”