The little-known genesis of the secret sauce

The Civil War was one of the most devastating events in American history, but food scholars point to at least one good thing that came from it: It's why there's a bottle of Tabasco sauce on millions of American tables. In fact, Tabasco—the Louisiana red pepper sauce that administers the legendary kick/tang to your tongue—is a global food phenom. Every day, people go through 450,000 bottles of the stuff. 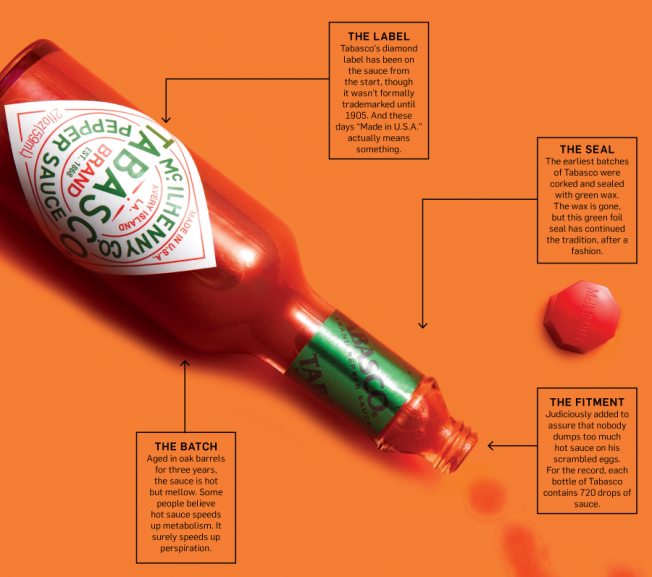 "When you think about ketchup you think Heinz, and when you think hot sauce you think Tabasco because it's in everyone's refrigerator," said Kara Nielsen, culinary director for creative agency Sterling-Rice Group. "It's the only condiment that's become like Kleenex."

And why? To be sure, Tabasco isn't the hottest sauce out there. Nor is it the costliest, and it's surely not the rarest (the brand's four factories crank out 700,000 bottles a day). But Tabasco is the oldest of the hot-sauce brands—the pioneer, the one that taught our palates how to play with fire. And that's no small part of why planet Earth consumes over 164 million bottles of Tabasco yearly.

But back to the Civil War. In 1865, banker Edmund McIlhenny found his financial business in ruins. Casting about for something new to do, McIlhenny began growing peppers on Avery Island, a wetland salt dome near Louisiana's eastern tidal marshes. By crushing the peppers and mixing in island salt and adding French white wine vinegar, McIlhenny made a mash he aged for 60 days, then sold in perfume bottles. Because his peppers were from Mexico, McIlhenny named his brand with the Mexican Indian word that meant "place where the soil is humid"—Tabasco.

It's too bad there was no word that meant "the sauce that perked up the pot roast" because McIlhenny's pepper batch soon found its way into everything from eggs to ketchup—and, 147 years later, it still does.

Though Tabasco's peppers come from the savagely spicy species Capsicum frutescens, the sauce isn't actually all that hot. It comes in between 2,500 to 5,000 on the Scoville Heat Unit Scale, and that's in the lower half. You can do a lot more damage with a few hits of, say, Melinda's Naga Jolokia sauce.

Still, according to Steve Seabury, who runs the New York City Hot Sauce Expo, it's Tabasco's combination of heat and versatility that keeps it on the dinner table.

"It's a good tasting sauce, and it's great on everything," said Seabury, who also manufactures his own hot sauces under the High River label. Tabasco, he added, is "kind of like a gateway sauce. It's usually the first sauce people try, and it's ingrained in their memories."

Quite a few memories, in fact. In 2009, no less a figure than England's Queen Elizabeth II granted Tabasco a royal warrant. Apparently, even the Windsors' meat loaf needs a kick.