It's a limited-time promo, but will health advocates be sweet on it? 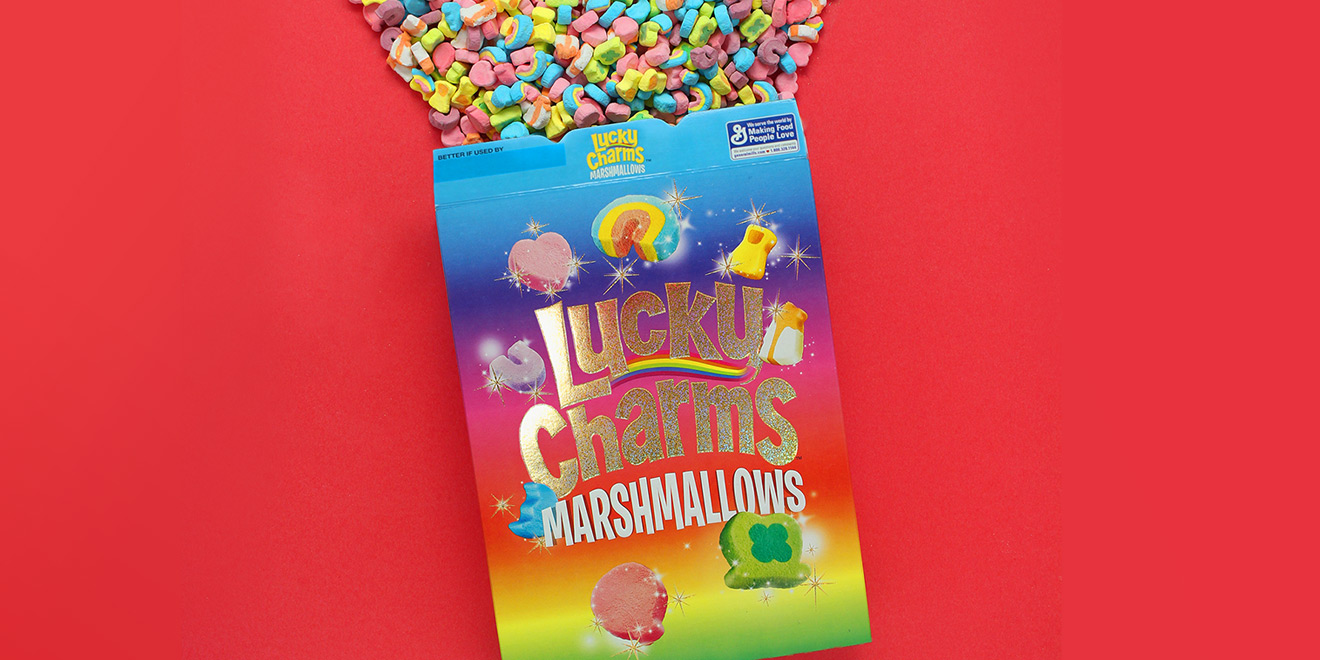 Originated in 2015, Marshmallow Only Lucky Charms is back.
Courtesy of General Mills
Share
By Robert Klara
|
May 15, 2017
Share

Back in the good old days, when kids across America dug into sugar-laden breakfast cereals with nary a concerned glance from Mom, fans of Lucky Charms could be divided into two camps. There were those who simply gorged themselves on all that varicolored, crazy-shaped kibble. And then there were the young ones with the strength to defer their reward. These kids would save the marshmallows for the end and then eat them all at once.

For the record, the company refers to those squishy, floating treats as “marbits” (a portmanteau of marshmallow and bits) and, for their devotees, there is good news. General Mills will be giving away 10,000 boxes of Marshmallow Only Lucky Charms—that’s right, none of that crunchy oat cereal to get in the way. It’s all marshmallows, all the time.

Well, some of the time. This is a limited-time offering, and consumers will need to buy a box of regular Lucky Charms to get a promo code that they then need to enter on the Lucky Charms website for a chance to win.

What softie came up with this marketing idea? Apparently, we cereal eaters did. According to Lucky Charms senior marketing manager Priscilla Zee, “This is something our fans have been asking for.” 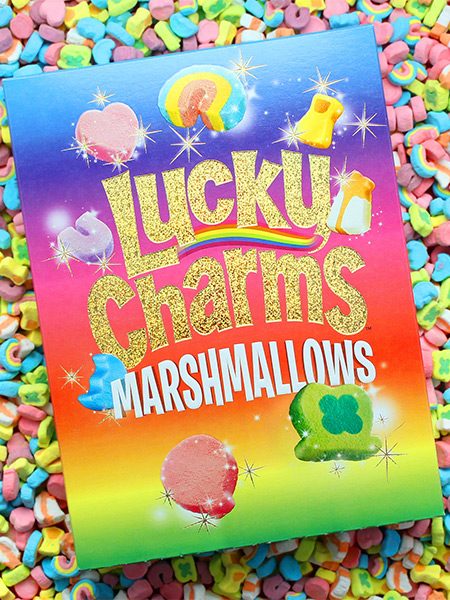 Marshmallow Only Lucky Charms actually dates to 2015, when General Mills first gave away the specialty boxes. But back then, there were only 10 winners. According to Zee, the resulting clamor from those not chosen—“countless calls, emails, tweets and Facebook posts from marshmallow fans,” as she put it—never died down. So now, two years later, General Mills has again cranked up the marshmallow production lines, this time to fill the 10,000 special-edition boxes with only marshmallows—sorry, marbits.

Specially marked cereal boxes advertising the sweepstakes were on store shelves as of last week—the official marketing push starts today—but even with that very limited exposure, Zee said, “to date, we know that there are already more than 100 winners.” General Mills expects that entrants will be divided between those who save the limited-edition boxes as collector’s items and those who’ll tear them open and eat the contents forthwith.

Aside from the code-driven sweepstakes being a good way to move boxes of cereal off shelves, however, the promotion raises a few questions. At a time when consumption of ready-to-eat cereals continues to decline, and even as concerns about the sugar content in prepared foods rises commensurately, is a special box of rainbow-colored marshmallows really such a smart branding move? Aren’t whole-grain oats the one redeeming thing about cereals like this?

“They’re between a rock and a hard place,” said Allen Adamson, founder of consulting firm BrandSimple. “Promoting the marshmallows has been a proven way they’ve increased business,” he said, referring to Lucky Charms’ long tradition of swapping out old marshmallow varieties for new ones. The cereal’s original lineup of green clovers, pink hearts, orange stars and yellow moons has changed many times over the years, with each new shape generating its share of attention. Even so, General Mills’ U.S. cereals sales were down 1 percent for the quarter ending Feb. 26.

“On one hand, it helps them in a tough year in a tough category,” Adamson said. “But in the long term, [look at] the headwinds they’re facing—many of their cereals are not as healthy as they could be, and this [Lucky Charms] is the poster child. So to me, it’s short-term gain versus long-term pain. They’re doing something short term to bump volume in the quarter, but they’ll be damaging their longer-term effort to reposition the product.”

And repositioning Lucky Charms has been no easy task.

The famous cereal with the leprechaun on the box first hit supermarket shelves in 1963 after creator John Holahan developed a prototype by mixing toasted oats (think: Cheerios) with diced up circus peanuts, the spongy orange penny candy first popularized in the 19th century. Lucky Charms’ combination of crunchy and chewy textures was well timed to the postwar-era embrace of foods that were both novel and convenient—and what kid was going to complain about eating marshmallows for breakfast? 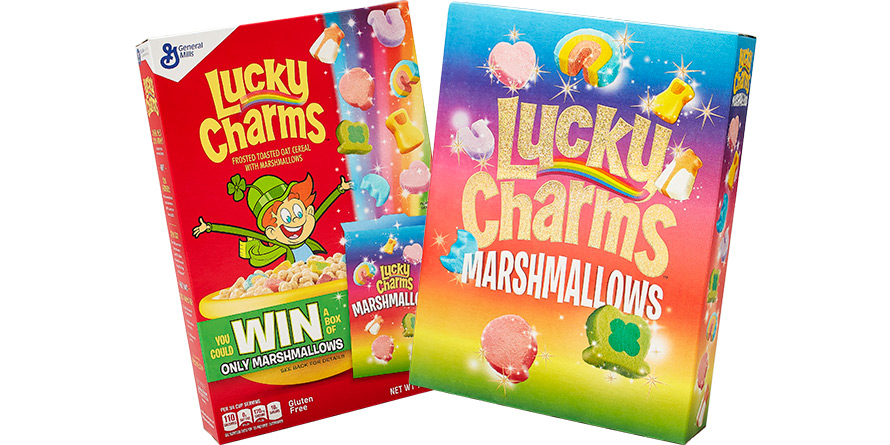 But these days, General Mills finds itself with the unenviable task of reformulating its legacy cereals for a population that’s increasingly turning to energy bars and yogurt for the day’s first meal. In 2007, the company dropped the sugar levels by an average of 16 percent and, as of 2011, no cereals advertised to children contained more than 10 milligrams of sugar per serving.

But General Mills’ biggest challenge remains Lucky Charms—and it’s because of those marshmallows.

The difficulty isn’t so much the sugar as the coloring. It’s not easy to make purple horseshoes, red balloons and blue moons without artificial additives. And while General Mills began an ambitious effort to remove artificial flavors and colors in June 2015, it acknowledged right off the bat that some brands would take longer than others.

“Cereals that contain marshmallows, like Lucky Charms, may take longer,” General Mills cereal division president Jim Murphy said at the time, “but we are committed to finding a way.”

Turns out, they’re still looking. “Removing artificial flavors and colors from marshmallows while maintaining the same great taste our fans expect is still our biggest challenge,” Zee said. “But we haven’t given up. This short, fun promotion is focused on giving our Lucky Charms fans what they have been asking for.”

And, according to Scott Davis, chief growth officer of brand and marketing consultancy Prophet, that’s not such a bad thing. As a brand, he said, “you have to do things to inspire, surprise, delight and disrupt.” General Mills, in Davis’ view, “is looking to create some new energy in a category that doesn’t have any energy. I’m in favor of trying to step out a little and create a little bit of dynamic energy.”

And while it may run counter to the overall shift toward healthier ingredients, Davis believes the limited-time nature of the offer is a mitigating factor. “We live in a world where brand authenticity and purity is held up in such high regard, [but] every once in a while, as long as it doesn’t harm anybody, you have to take a risk and break rules,” he said.

Meanwhile, if Lucky Charms fans don’t luck into one of the 10,000 limited-edition boxes, there’s always this last resort: Head over to Amazon and pick up a 1-pound bag of colored marshmallows for $10.99.