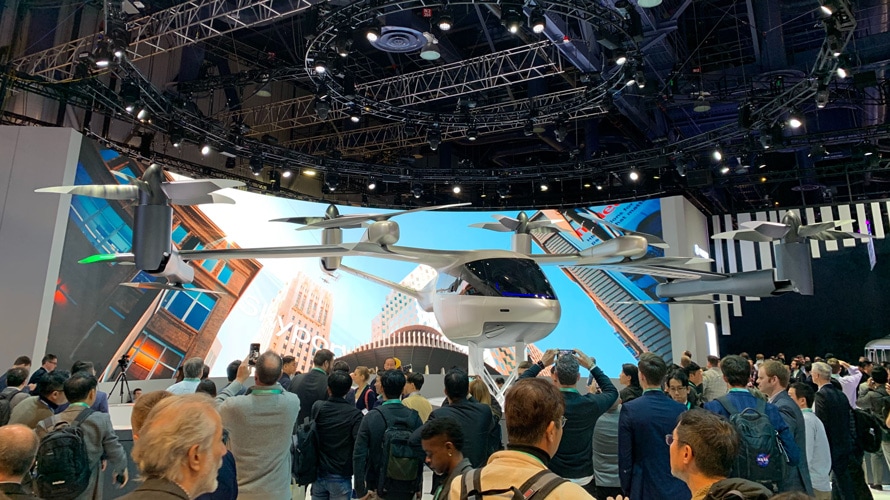 The Hyundai S-A1 prototype aircraft was unveiled at CES 2020. Ryan Barwick for Adweek

LAS VEGAS—At the Consumer Electronics Show, scale matters, and Uber and Hyundai want you to know that their new partnership will bring scale to the skies. The ride-sharing company and auto manufacturer are joining forces to build an armada for the air, a fleet of what they’re calling Air Taxis that they say will usher in a new way to travel.

This isn’t your typical helicopter transport for the wealthy. With Hyundai on board to mass-produce a new kind of flying machine for Uber, it’s not hard to imagine the hoi polloi joining in on the privatized air transportation game.

The partnership was announced on Monday, and CES 2020 attendees got a chance to view the vehicle the next day. Hyundai’s vehicle, the S-A1, is staggering.

While the cockpit wasn’t open to attendees, the aircraft’s sleek design, similar to the helmet of a Star Wars stormtrooper, and size felt comfortable among the other luxury vehicles in the exhibit hall.

The 7,000-pound aircraft seats four passengers and will be fully electric, with a cruising speed of 200mph at altitudes of between 1,000 and 2,000 feet. It uses small motors to reduce noise, and will take off and land vertically like a helicopter. The vehicle will be piloted initially, but Uber and Hyundai aim to eventually make it autonomous.

A Hyundai spokesperson told Adweek that Hyundai should have the aircraft in the skies within five years. That would exclude Hyundai from the first couple of years of Uber Air, which is expected to launch in one city by 2023.

That will also mean the S-A1 won’t be the vehicle Uber Elevate begins testing this year, which Eric Allison, head of Uber Elevate, said will include public demonstrations. Test cities include Dallas, Los Angeles and Melbourne, Australia.

But Hyundai’s capability to mass produce the Air taxi will be invaluable to Uber as it inches closer to its ambitious timeline. Between 2024 and 2028, Uber Air could grow to as many as 25 cities with more than 100 aircraft, in what sounds like a science-fiction environment.

More simply put, Hyundai is going to be late to the party, but it’s worth waiting for.

When asked whether Uber Elevate would be a game-changer for cities as large as New York or Los Angeles, Allison pointed to Uber Transit, the app’s public transportation product, as another way the app was linking together all methods of transportation for every price point and person.

“Everyone has a personal elasticity to time, price and the mode of transportation,” he said. “That’s the right approach, to do a bunch of things and create this platform that we can add transportation technology into and link them together. … We are pioneering the linking of ground to air to ground in a single trip.”