Owner of @Periscope says today is like 'waking up on Christmas' 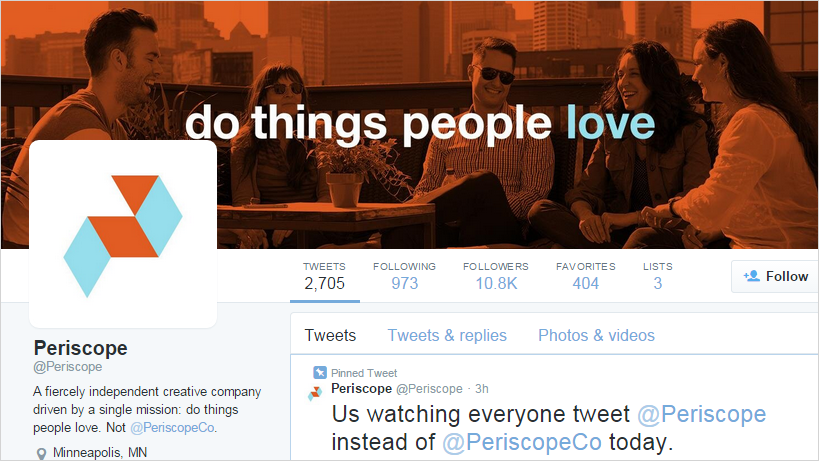 What happens when your agency ends up having the same name as a hot new app launched by a social media giant? Well, if you're Minneapolis-based Periscope, you sit back, relax and watch a lot of accidental buzz roll in.

Twitter just launched Periscope, its competitor to livestreaming app Meerkat. As is often the case, the new app's name was already in use by another company, in this case a creative agency that even owned the Twitter ID @Periscope.

Us watching everyone tweet @Periscope instead of @PeriscopeCo today. pic.twitter.com/dpG24vkBMV

The agency has been on Twitter since April 2009. That meant that the livestreaming startup, eventually acquired by Twitter, was relegated to using @PeriscopeCo.

Agency Periscope's brand manager, Bridget Jewell, said that Twitter never approached the shop about buying (or simply taking) the handle from them.

The result has been no small amount of confusion, with many on Twitter confusing the agency's handle for the app's official account:

Yes, we are on @periscope – Expect random, hopefully entertaining live streams to pop up. Just search for 'lootcrate' in the app, follow us!

You know those times when you say you won't get addicted to a piece of tech, then it happens? @periscope I'm talkin' to you.

Follow me on @periscope…I'll be live broadcasting from my submarine later today.

The whole situation seems to be working in the agency's favor.

"It's been every social media person's dream," Jewell said. "Like a kid waking up on Christmas morning, but with tons of Twitter notifications."

The agency's social media team is clearly having a bit of fun with it all, using the misled tweeters as leverage to gain a bit of publicity, gain followers for its own Periscope account and even answer people's questions about the app.

The agency has even changed its Twitter bio to help out poor, lost Twitter souls. The bio now reads: "A fiercely independent creative company driven by a single mission: do things people love. Not @PeriscopeCo."

Jewell said she's just thankful that the newer Periscope didn't sell some horribly offensive goods or services that would cause people to align their agency with something negative. (It happens more often than you might think.)

"But how ironic that the two industries align," Jewell said. "Our clients could be using this app in the future."