The Tuesday Team: The Inside Story of the Admen Who Got Reagan Re-elected in ’84

How we faced the most high-stakes pitch of our careers 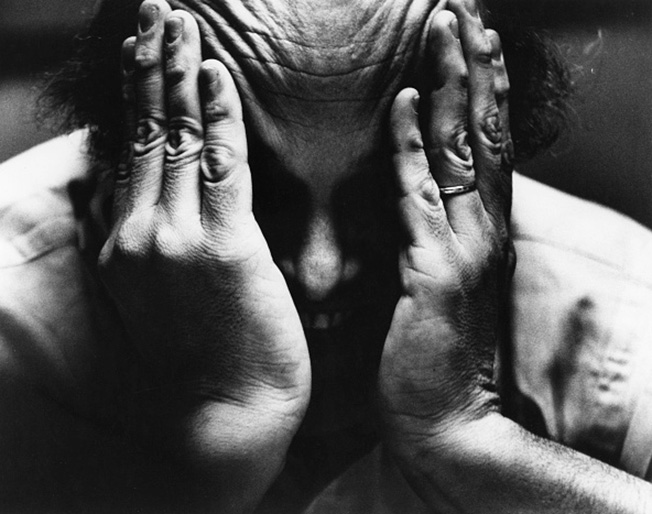 Mike Deaver had an idea.

Instead of making commercials and a convention film with the political professionals, he wanted to see what Madison Avenue could do taking on Ronald Reagan's re-election.

Not that the political pros had been slouches in 1980. That 1980 advertising had to depend, though, on media tonnage to overcome what it lacked in ideas and production. It played like one long product demo; i.e., Ronald Reagan truly served eight years as governor of California. Its success was gauged by focus groups that drove the content of political advertising then if not now. By the end of October, the people around tables chomping on sandwiches were not talking about George Gipp or the host of General Electric Theater and Death Valley Days, but someone who had indeed prepped seriously to be president.

This time, Mike Deaver wanted advertising worthy of what he saw as the triumphant Ronald Reagan years. Both he and Nancy Reagan, The New York Times reported, thought the 1980 commercials were "static and uninteresting." In the winter of 1984, he also remained wary of the Senate and House GOP defeats of the previous election and the daily attacks in free and paid media during Democratic primary campaigning.

He knew, too, that he was only deputy chief of staff and would need to pitch the team and their work to the chief of staff, James Baker, and the Reagans themselves.

His first hire was Phil Dusenberry of BBDO, agency for GE, Pepsi-Cola and Dodge. Phil had both Madison Avenue and Hollywood creds, as he ran the agency's creative department and, in his spare time, had produced and worked on the Malamud/Redford baseball movie The Natural, which was about to debut. Phil was assigned the convention film, a now-necessary form thanks to President Carter's Georgia compatriot Gerald Rafshoon, who introduced Coca-Cola sensibilities to nominating gatherings and succeeded in moving even the sleepiest of delegates and television networks.

"They got Coke," Deaver figured, "we got Pepsi and Dusenberry." 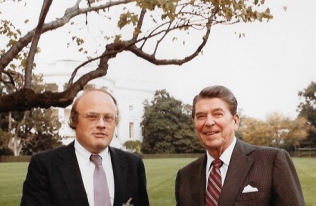 The author with President Reagan, 1984.

He then offered the task of running the advertising to Jerry Della Femina, founder of Della Femina Travisano & Partners and author of what one reviewer called the Ball Four of advertising books, From Those Wonderful People Who Brought You Pearl Harbor. The title was grabbed from a faux line Jerry once suggested in a meeting at the Ted Bates agency for new client Panasonic, whose parent company was Matsushita.

Jerry—whose agency was known for irreverence, an understanding of contemporary consumers and a "working-class" Brooklyn wit—accepted. He told Deaver: "When I was a boy I asked my father, 'What's the difference between Republicans and Democrats?' He said: 'Democrats are for poor people like us. Republicans are for the rich.' I answered, 'I want to be rich so I'm a Republican.' "

Deaver explained to the press that Della Femina's "lack of experience in campaign advertising was an asset rather than a liability."

A very short-term asset, it turns out, as a week later Deaver asked Della Femina to come down to D.C. and told him, "Someone in the administration didn't want you." No reason given. "I was just told I was no longer being considered," Jerry says. "Later I heard rumors that someone in the ad biz had gotten an old interview I did with OUI magazine to Nancy Reagan. The article talked of drug use and 'sex contests' as an ongoing part of ad agencies, including my own. If I had known it at the time, I would have defended myself. I thought the article a hatchet job and sued them right after it ran in 1981."

Jerry went back to New York "sad and disappointed." And quizzical: Deaver ended the exit interview by asking Jerry to name his replacement. Jerry told him to get Jim Travis, the head of Della Femina Travisano's West Coast office, rather than go through interviewing more agencies. Travis wasn't a writer or producer or researcher, but if the title had existed then, it would have fit Travis: showrunner.

Deaver and Travis named it the Tuesday Team after the day of the week most people go to the polls. (One member of the team later suggested that the only way to win Washington D.C.'s electoral votes was to put up billboards all around town saying "Don't forget to vote next Wednesday.")

Travis started to build the team with account man Walter A. Carey from New York's Leber Katz Partners to run the business side of the agency. Carey recalls being offered free space in the new Trump Tower on Fifth Avenue, but thought it a little showy. Instead he booked almost windowless donated offices in Rockefeller Center, entrance on the Avenue of the Americas, or Sixth Avenue, as it was referred to by the establishment wing of the GOP.

Travis and Carey then drafted writer Jim Weller (about to do Joe Isuzu, the triplicitous car salesman) and art director Ron Travisano (who had worked with Jerry Della Femina since the mid-'60s and begun a move to commercial film direction). They got Hal Riney from Ogilvy & Mather on the West Coast. Riney, a legend in San Francisco, had only recently gained national recognition in the ad business as the writer and the voice for the Gallo Wine film fests. They then signed Sig Rogich of R&R Partners in Nevada ("What Happens in Vegas, Stays in Vegas") at the recommendation of Senator Laxalt, the legislator closest personally to the president.

Travis filled out the initial Tuesday Team roster with one volunteer: me. 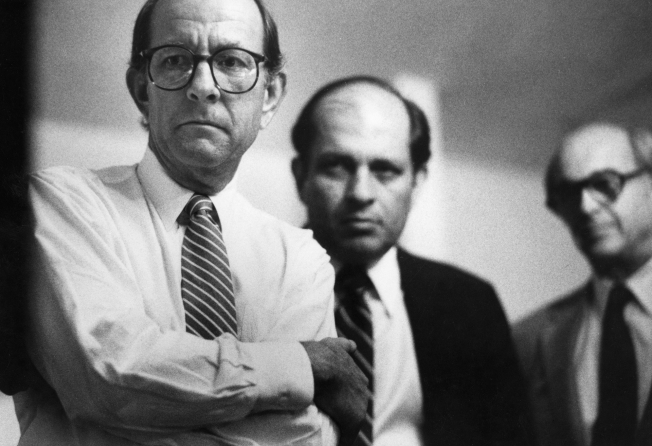 Travis and Carey cut a reel of commercials from the group. Meow Mix, Gallo Tawny Port, several beer brands, Crocker Bank, Barneys New York, Pan Am. It finished with the closest thing the group had to a political message: an attack ad to leave them laughing by MCI on its bully competitor, the former monopolist AT&T.

They took the reel down to Deaver and ran it in the Roosevelt Room at the White House, a shade august but the only room then with a monitor and tape player. The venue worked, as other White House luminaries and staffers dropped in, and a rule with showing a reel of commercials is that the larger the audience, the better the reception. Travis and Carey got smiles in the right spots and applause at the end and entrée to the next step in the new business routine—assessing the marketing problem, or as the Dale Carnegie remnant puts it, the opportunity.