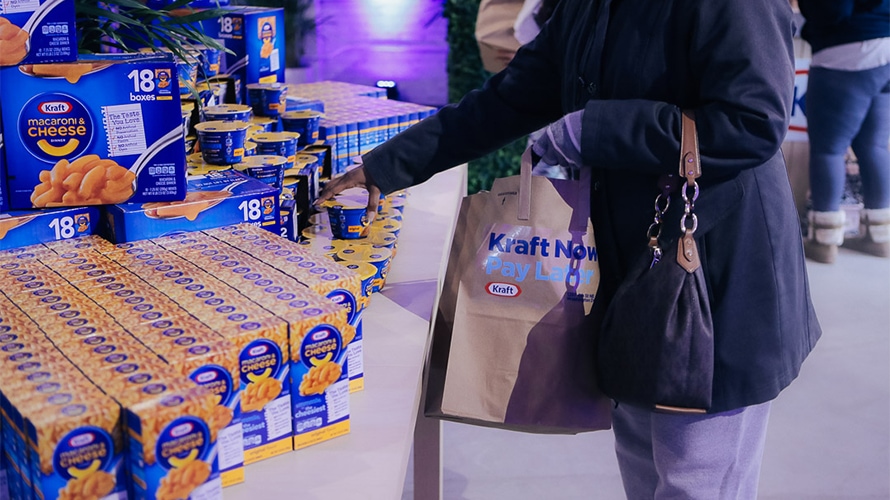 As the federal government shutdown stretches on, Kraft is partnering with several brands to provide food and clothing to furloughed federal workers.

Kraft opened Kraft Now Pay Later, a pop-up grocery store located at 1287 4th Street NE in Washington, D.C., on January 16. Four days later, the company took out a full-page ad in the Washington Post to implore other brands to join them in donating their goods to line the shelves of the store, which is offering free food and other products to federal workers who aren’t receiving a paycheck during the government shutdown. Any current government employee with a government ID will be able to shop at the store for no charge.

Today, the company announced that the reply to that ad has been “overwhelming.” Joining the store includes brands like Tropicana with juices, Land O’Lakes with butter, Oscar Mayer with cold cuts, Capri Sun’s juice pouches, Fillo’s Americas Made beans and H&M with winter clothing donations.

“We’ve made a commitment to support families through this situation to the very end, no matter how long it lasts,” the Washington Post ad read. “We are now asking other national and local brands to join forces with us to support the more than 800,000 federal government workers impacted. Last week we opened a free grocery store in Washington, D.C., and within days a few thousand people picked up a bag of groceries for their families. We’re extending our time there, and we’d be happy to make room for your brand. The need—and extra shelves—are there.”

“For us, this isn’t about politics,” the ad continued. “It’s about families. The same families who have supported our brands and the part we can play in making sure dinner stays business as usual. We’re hoping you can find a part to play, too.”

Along with opening Kraft Now Pay Later, Kraft is also accelerating the donations of more than a million meals (made up of Kraft products) to donate to Feeding America, as per their annual donation. Kraft also asked brands to “help us make that donation even bigger.”

The products at Kraft Now Pay Later are available for free, but the company is asking those who visit the store to “pay it forward” by donating to the charity of their choice, if and when they’re able.