This Shockingly Effective Fire-Safety Video, Viewed 9 Million Times, May Change How You Sleep 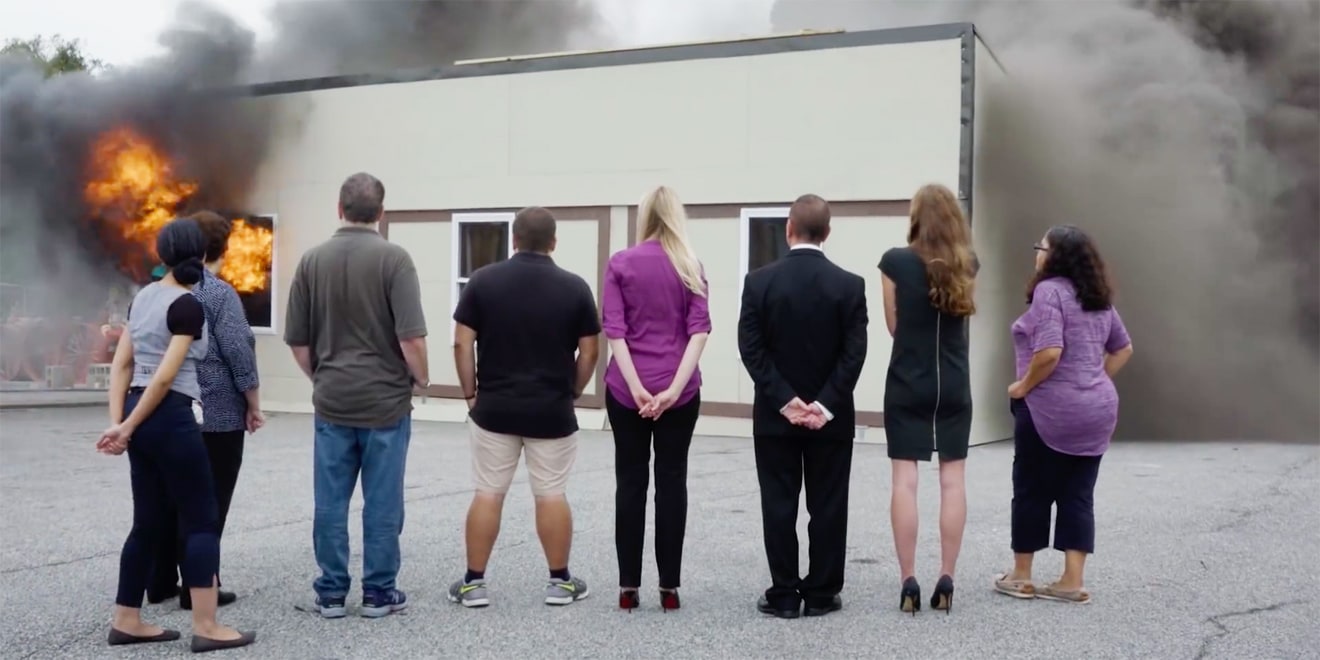 Do you close your bedroom doors before you go to sleep? You probably will after watching this.
Allison + Partners
Share
By David Griner
|
November 1, 2018
Share

When you go to sleep at night, you’re probably not thinking about fire ravaging your home. And if you’re like me, you probably leave your bedroom doors open—perhaps so kids and pets can wander freely, or maybe just so you can hear whether there’s trouble in the night.

If so, you’re not alone. Only 29 percent of Americans sleep with their bedroom doors closed, according to a recent survey by the UL Firefighter Safety Research Institute. And of those who do keep doors open, the group reports, more than half think it will actually help them in a fire to have doors open for easy access to other rooms.

Unfortunately, having bedroom doors open in a fire can dramatically worsen the situation, helping a fire spread quickly and reducing the amount of time families have to evacuate.

Obviously, if the research institute wanted to address this common and dangerous sleeping behavior nationwide, it would need a potent message to cut through today’s noisy media landscape and get Americans thinking about closing doors and night (along with other key steps like having a well rehearsed fire-evacuation plan in place).

And a potent message is what the group got with “Close Before You Doze,” a fire-safety campaign whose central component—a video more than 5 minutes long and created by agency Allison + Partners—has gone viral since debuting earlier this month. It has been viewed 8.5 million times on Facebook, with nearly 500,000 views on other platforms like YouTube. Only 0.3 percent of the views were from paid media support, according to the agency.

The video packs a lot of information, but what’s really getting buzz is its dramatic visual and shocking reveal:

The video was created in response to the safety group’s research into both household trends and marketing effectiveness when it comes to effecting change.

“Closing doors and windows isolates a fire to choke its oxygen supply. Once our research proved that definitively, we felt a responsibility to share that with people everywhere,” says Zoe Susice, director of strategy and marketing at UL (Underwriters Laboratories). Before we launched this public safety campaign, we did a consumer survey and learned fire safety is not top of mind for most people, so we conducted research into successful public awareness campaigns. While there is no silver bullet, we saw a consistent theme of emotion mixed with delivering a clear, succinct message.”

The video certainly elicits emotions. One key stat that surprised many viewers was the fact that modern floor plans and furnishings have made fires spread far more quickly over the past 40 years, reducing the time to safely evacuate from an average of 17 minutes to a mere 3 minutes or less today.

“They are not kidding when they tell you how fast the fire burns,” said one Facebook commenter. “My house caught on fire and I had to get my special needs daughter, my mother with Alzheimer’s and my dog out which was not easy and by the time I got everyone out the entire house was engulfed in flames. I thank God every day for the strength he gave me. You need to take this very seriously.”

The campaign has been featured on national morning programs like the Today show and Fox and Friends. Susice says it’s been tremendously rewarding to see the message and the video reach such unexpectedly large audiences.

“The results have been phenomenal. The video is posted to all our channels – YouTube, Vimeo, CloseYourDoor.org and shorter clips on Twitter and Instagram, but where it immediately took off and has continued to gain momentous viewership and engagement is Facebook,” she says. “The video had over 1 million views in the first 24 hours and now has been viewed more than 8.5 million times and shared approximately 135,000 times.”

The campaign has also been a hit with firefighters at the local level, and they’ve become passionate advocates in sharing its message.
“We’re seeing Close Before You Doze included in public safety messages from the fire service and other first responder partners as well,” Susice says. “The collaboration has been amazing and helped spread this safety message to more people—and that’s the bottom line: getting this message out there and inspiring people to simply close their doors can mean the difference between life and death.”