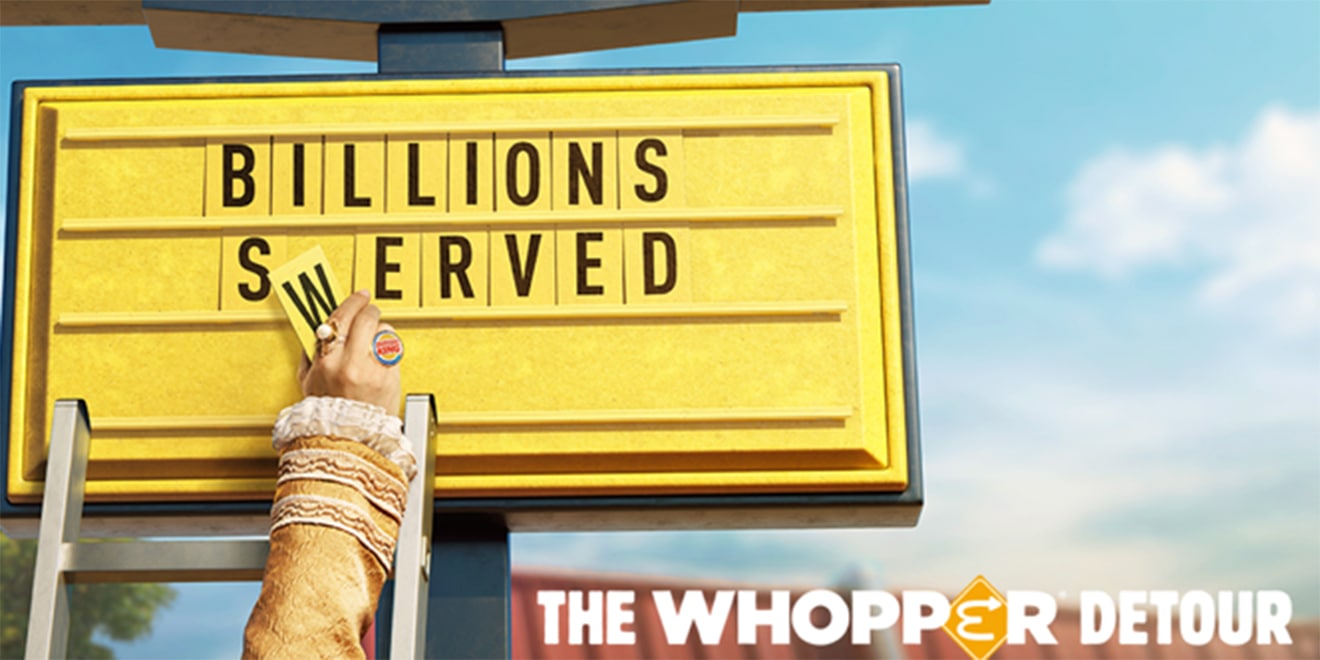 FCB New York's Whopper Detour was a year in the making and redefined the potential of a creative idea.
Burger King
Share
By Fernando Machado
|
May 17, 2019
Share

In the past few years, Burger King built a reputation for itself. I believe our brand has mastered the art of using creativity to get people’s attention and build brand love.

McWhopper, Google Home of the Whopper and Burning Stores—among many others—were talked about everywhere, achieved billions of impressions, helped revamp the brand and were celebrated by our industry. Surely many of our blockbuster campaigns drove traffic (bringing people to restaurants) and sales, but the main focus of most of them was to “make the brand cool again.”

That’s why we see Whopper Detour as a defining moment for our brand. There is a clear “before” and an “after” when it comes to Whopper Detour. This campaign marks a turning point in our marketing and shows what we believe the future of great creativity might be—at least for us. A future where creativity is only used for (and celebrated for) responding to real, tangible business and brand goals.

This campaign was an idea that played with technology that is not necessarily new. Geofencing and mobile order and payment have been around for a while. It’s also not easy to convince people to download mobile apps from fast-food brands, especially burger chains. Many brands, including ourselves, couldn’t get people to download their apps even when giving products away. Yet Whopper Detour increased the BK mobile app sales by three times during the nine-day promotion and by two times ever since the promotion ended. This campaign catapulted BK’s app from a modest No. 686 in the app store to No. 1 across all categories, on both iOS and Android. It also drove the highest foot traffic—people coming to the restaurant—in 4.5 years.

So, the question is: How the hell did that happen?

This case not only shows the power of a big idea and what it takes to make something different happen but also the reason why our creative partners (aka advertising agencies) are so relevant. Big creative ideas eat programmatic, AI, trends and even a beautifully put together McKinsey presentation for lunch. And these days, people seem to forget that.

The big idea is where our industry should focus. We used the art of creativity to get people’s attention, build brand love and build our business today and tomorrow in scale. This was not a one-location, one-day stunt that gets people to talk about it—especially industry people—but is not linked to results. When we celebrate ideas like this one, we show that our advertising and creativity industries can indeed have a bright future and will be able to continue to have fun and make great business. And that’s the main reason we wrote this case study and are sharing it.

If you don’t have time to read this entire piece (which would be a shame!), at least watch this:

Whopper Detour is one of my favorite Burger King ideas ever.

It took us about a year to make. The idea came to us from FCB New York and evolved a lot over time—a characteristic we see in all of our best campaigns. It involved a large team to pull it off, including our technology team and key tech partners. We basically had to recode our newly updated mobile app with mobile order and payment to now also work well and consistently with geofencing.

We are investing a lot to improve our guest services at Burger King, and technology has a key role in this. After all, mobile has grown to be a vital player in the QSR space, poised to be a $38 billion industry by next year, per QSR Magazine. But mobile ordering and payment aren’t new to people, nor is geofencing.

So to get people to actually care about our BK app is a testament to the beauty of this campaign, which started with a very simple PR headline: “You will be able to order a Whopper for 1 penny at McDonald’s.” Wait, what? That’s kind of a mindfuck. A Whopper at McDonald’s? That’s the exact opposite of what most direct marketing campaigns aim to achieve. You are asking people to go to your competitor before coming to you.

That’s turning brand experience upside down. And that’s showing how technology plus creativity can open new doors for brands and businesses. And while it is admittedly a bit crazy, that tends to be an ingredient in all our best ideas.

The objective of this article is to share part of our journey in making Whopper Detour happen. By doing so, we aim to showcase the power of teamwork and creativity to drive brand and business results.

It was the beginning of September, back in 2017. FCB New York and Waze (their partner) reached out to us to share an idea. The starting point/insight revolved around the fact that Burger King has significantly fewer restaurant locations than McDonald’s. And since in the U.S. most of the revenue comes from the drive-thru, it’s fair to say that quite often BK fans have to drive longer distances to get their flame-grilled Whoppers.

So the idea was to reward these folks who are going “the extra mile” to enjoy Burger King, literally earning a discount for passing McDonald’s on their way. 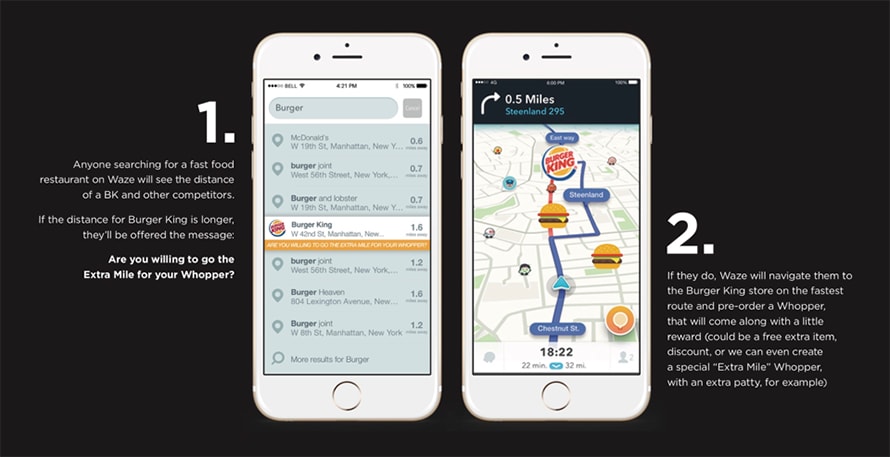 A brief description from the original presentation about how it would work.

The presentation was pretty complete, with an overview on how to expand on the idea at different touchpoints, ranging from social media to out-of-home. It was presented as an idea that would trigger headlines and conversations, both highly desirable outcomes in all of our successful Burger King campaigns.

The presentation's mockup of social, outdoor and PR extensions

At the time, we thought there was something really interesting around the idea. We never played with geolocation before, and a partnership with Waze sounded like a cool thing to do. Also, despite the fact that drive-thru is indeed our most important channel, we haven’t really done any drive-thru ideas in the recent past.

With that said, when comparing the “voltage” of the idea with other ideas in our pipeline, we felt that there were other things that had the potential to drive stronger talkability and PR. So, we decided to provide feedback, which was pretty much: “There is something here that we like. Let’s keep working on it.”

A new spin: “The Secret Whopper”

Well, not in this case.

One thing we’ve learned in the work we do at Burger King is that many times we hit the right territory but the idea is not quite right yet. In fact, I can think of many territories that took us more than a year to connect to the right idea. And in some cases, even more than that or never at all. We don’t have an issue shooting an idea dead if we don’t think it has legs. So, when we say “Let’s keep working on it,” we mean it. But neither FCB N.Y. nor Waze had worked with us before, and I am sure that there was uncertainty about a potential positive outcome coming out of this.

Believe it or not, FCB N.Y. continued to work on it. The talented team lead by Ari Halper and Gabriel Schmitt kept thinking, playing with and polishing the idea. I guess they believed in it so much that they glanced over the uncertainty and kept pushing. So around mid-November, two to three months after the first presentation, we got an email from Gabriel saying they “changed something on the idea and now it was waaaaaaaay better” (that’s how Gabriel speaks when he believes in something). I had a meeting in New York during that week, so I decided to stop by FCB N.Y. and take a look at that “waaaaaaaay better” version of the idea.

Burger King has significantly fewer stores than McDonald’s,
so we’re not always the closest option.

How do we turn fewer stores into an opportunity and
reward drivers willing to go the extra mile for a better burger?

By turning our competitor’s stores into ours.

That was the genesis of “The Secret Whopper: A Special Whopper Available Only at McDonald’s.” Wait. What? Yes, that’s what they proposed. And we loved it.

A BK mobile app flow for “The Secret Whopper” concept

The agency also presented a series of additional assets to help bring the idea to life. Example of a potential billboard execution for “The Secret Whopper” idea

The idea clearly had evolved a lot. And the agency managed to tap into something that was very important for the brand: the mobile app. Remember that originally this was an idea that would happen mostly on the Waze platform.

At Burger King, we are investing a lot in technology to improve guest services, and the mobile app is a key pillar in our strategy.

If you think about fast-food restaurants, most of them have tended to leverage the same technology and layout for decades. The drive-thru, for instance, is kind of the same as it has always been (always a bit of a struggle to get that order taken the right way). For years, the category—especially for burger chains—failed to evolve much with technology. But recently we have seen an acceleration behind initiatives around self-ordering kiosks, mobile apps, etc. The importance of technology among all fast-food players increased in the recent past, and that’s no different at BK.

Back in November 2017, our Burger King app was basically a coupon app. Oh, we also had a store locator (d’oh!). But we had ambitious plans.

We were working to develop mobile order and payment. That was a big deal for Burger King. It is really hard to code everything and make sure the app is integrated with our different point-of-sales systems (believe me; it’s a nightmare). We wanted the app to work with geolocation, which would allow for small variations in price and menu for different restaurants, a really big deal for Burger King. Yes. For Burger King. Because mobile order and payment are obviously not new. Even the guy who sells coffee next to my building in Miami has it. Everyone had it. So, this was a big deal for us and not such a big deal for the industry. That’s why the challenge was to come up with a big creative idea to make people care/share and get earned media at the app’s relaunch.

We didn’t think it should be a “Secret Whopper.” Instead, we recommended it be the regular Whopper. Why? Because our regular Whopper is our most iconic product and to sell that at McDonald’s would be the biggest WTF moment.

So, here was FCB N.Y. bringing an amazing idea to relaunch our mobile order and payment capabilities. We had only one piece of feedback: We didn’t think it should be a “Secret Whopper.” Instead, we recommended it be the regular Whopper. Why? Because our regular Whopper is our most iconic product, and to sell that at McDonald’s would be the biggest WTF moment. No need for a special build.