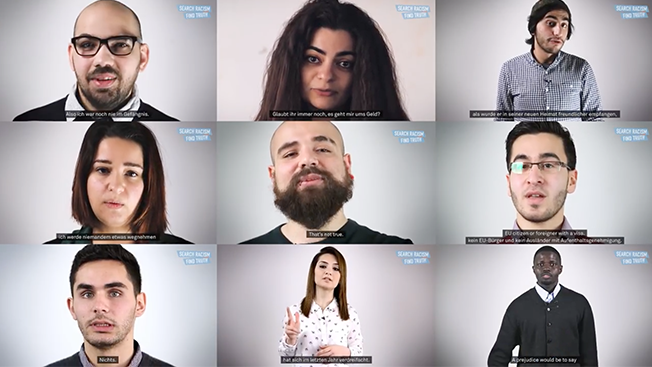 According to the United Nations, more than a half a million refugees have sought asylum in Europe over the past year to escape the violence and atrocities of the civil war in Syria. But after surviving the dangerous journey across the Mediterranean, Syrian refugees often are faced with discrimination and racism, with some railing that they're criminals or are stealing Europeans' jobs.

"We saw what was going on in society and how the mood was changing," Dennis Lueck, executive creative director at FCB Zurich, told Adweek. "The more refugees that came in, the more hate started to grow, especially on the internet. We wanted to do something that helps clear up these prejudices and to give these refugees a face."

Starting April 19, people in Germany searching for xenophobic videos on YouTube are first shown clips in which refugees rebut prejudices with facts, personal anecdotes and humor. Due to a combination of channel and keyword targeting and the placement of unskippable ads before specifically selected videos, those looking to watch hateful videos will be unable to avoid watching the messages from refugees first.

For instance, people searching for videos of right-wing German leader Lutz Bachmann, who often attacks refugees in his speeches, will first see a clip of Arif, a Syrian refugee who says, "Lutz Bachmann is going to tell you that all refugees are criminals. I've never been to prison, but Lutz Bachmann has."

In another video, Syrian refugee Najlaa says, "The following video will tell you that refugees like me are only here for money. My home was bombed and completely destroyed. Do you think I care about money?"

Each spot links to a website with more videos of the refugees' stories, including one from Aglia, a Syrian journalist who sought asylum in Germany and feels unwelcome and displaced there.

The campaign has so far garnered attention from media outlets around Germany, and politicians in the German parliament have retweeted it, Lueck said.

"These refugees have so much courage, and they tell these stories so well that it really makes people think," he said. "People are saying they're not going to believe everything that the hate media is trying to tell. It's creating a real behavior change."