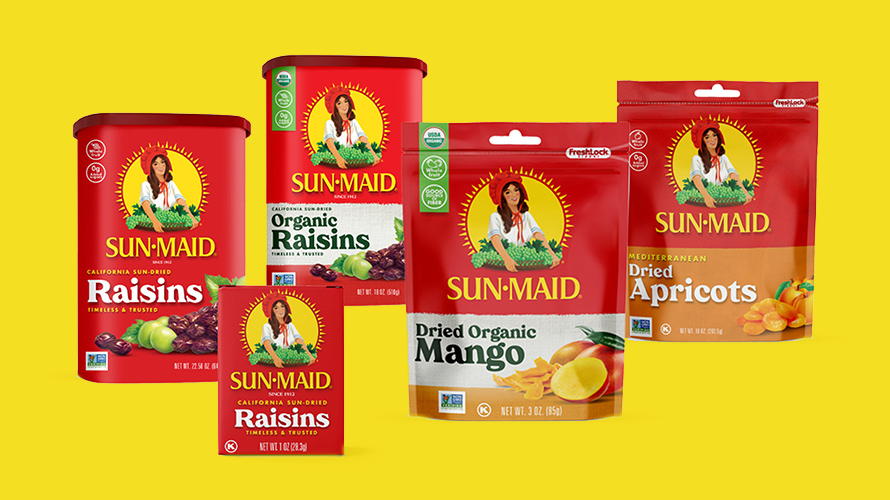 Prior to this update, Sun-Maid's logo hadn't been altered since the 1970s. Sun-Maid

Any company looking to start a new food-based CPG brand aimed at today’s millennial shoppers would likely try to leverage the following attributes: authenticity, portability, wholesome ingredients and a business structure that supports local farmers. If it were possible to infuse the new brand with an aura of nostalgia, they’d probably do that, too.

Sun-Maid, a farmers’ cooperative established in 1912 that’s known for its raisins and logo of a girl in a red bonnet, has all these attributes. But according to Harry Overly, chief executive of Sun-Maid Growers of California, many people just don’t recognize that.

“We believe that a lot of millennials, with the plethora of snacking options out there today, have really kind of forgotten about Sun-Maid,” said Overly, who joined the company in late 2017. “You check the box of everything that they would be looking for, and we’ve had it. We just got to bring it to the forefront.”

To help reintroduce the raisin brand to this generation of young parents, Overly has pushed out a number of new initiatives, from a national campaign to new product lines, such as sour raisin snacks in flavors including strawberry, watermelon and blue raspberry.

The most recent attempt to win over consumers has been an update to the brand’s iconic logo—an image that hasn’t been altered since the 1970s.

Working alongside its creative agency partner, Quench, Overly said the redesign took about a year to complete because they knew they had to be careful not to upset anyone. They realized that if they touched it at all, a slight tweak would be much safer than a complete overhaul.

“We got feedback from people who would say, ‘Listen, if you change the Sun-Maid box, it’s like changing the American flag,’” said Overly.

Changes include a slight refinement to the Sun-Maid girl and removing the yellow outline around the sun to accentuate the sun’s rays. Products featuring the updated design are rolling out throughout 2020. Douglas Sellers, executive creative director at global brand strategy firm Siegel+Gale, called the redesign more of an evolution than a revolution, but one that successfully found balance between the brand’s past and present.

“The red box and yellow sun are the main semiotics here,” said Sellers. “The new simplified design pops, making the Sun-Maid logo more heroic, which amplifies the heritage in a much more simplified and modern aesthetic.”

On the red box itself, the company added the slogan “Timeless & Trusted” along with little nutrition labels indicating the contents include whole fruit with no added sugars.

“There has been negativity in the past toward dried fruit products that added sugar to the already sweet dried fruit,” said Sally Lyons Wyatt, an executive vice president and practice leader at Chicago-based market research firm IRI. “Over the past couple years, however, many manufacturers have moved away from this practice and are noting it on their packages.”

Lyons Wyatt said raisin brands that have touted “no sugar added” or other similar claims on their packaging grew in dollar sales last year, and are currently achieving double-digit growth in 2020.

According to recent IRI survey data, 54% of consumers want snacks that contain vitamins and minerals, and 48% are looking for options high in fiber to help with digestion.

“I like to tell everybody that it really is the very first fruit snack that ever existed,” said Overly.

In January 2019, Sun-Maid debuted its first national campaign in about a decade. Titled “Grow Young,” the 30-second spot, also created by Quench, is all about remembering what it’s like to be a child and early experiences with the Sun-Maid brand. It’s meant to play heavy on emotion and nostalgia, according to Overly.

For the first time in years, Sun-Maid was seeing positive sales trends within the raisin category. “We knew the marketing was working for us,” he said.

Similar to most all brands dealing with the Covid-19 crisis, Sun-Maid has leaned into the present moment by posting various recipes and activities to help families pass the time while sheltering in place.

Last week, the raisin brand posted a video on its YouTube channel thanking its employees, frontline workers and “all the others who are keeping our lives going.”