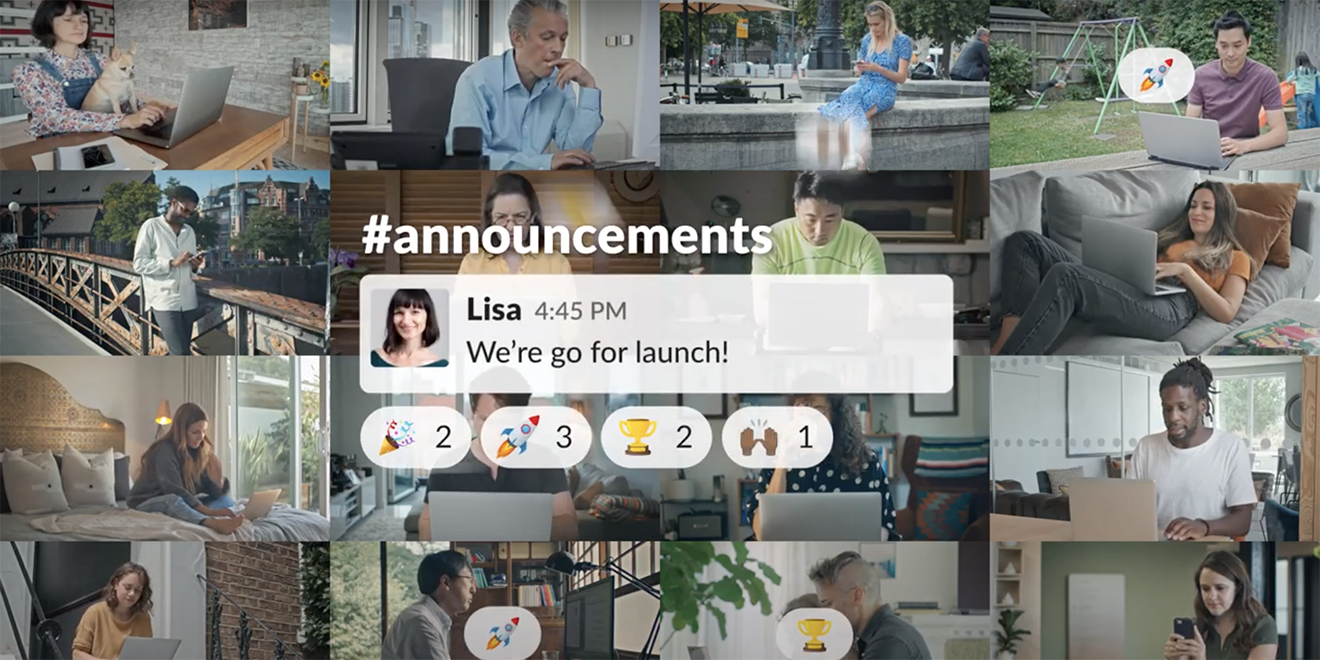 With many businesses in various stages of reopening their offices and employees discovering new productivity routines outside their home, Slack is seeking to highlight the variety of remote work situations with a new ad campaign.

The office chat app has released two new ads—a 30-second live-action TV spot and a 15-second animated video—that reflect the central role that the platform now plays in many of its users’ work experience amid the Covid-19 pandemic.

The new campaign is part of a larger repositioning of Slack’s marketing message to adjust to the new realities of working from home.

“It’s really about showing the world that Slack can sort of fill that gap that was lost when we had to shift to this new way of working, and if anything, create new opportunities to work better,” Slack CMO Julie Liegl said. “[We saw that Slack] was becoming even more critical to people as work went from being something that you did from nine to five in an office to what you do from wherever you’re able to find space to work whenever you’re able to find time to work.”

The campaign also coincides with a partnership with Cole Haan on a set of distinctively branded sneakers that had the internet talking this week. Liegl said the crossover deal emerged out of a celebratory gesture from the shoemaker for the company’s IPO last year that proved to be such a hit that the two companies decided to take it further.

“They got really excited about the idea of doing the shoes for real beyond just the the test ones that they made,” Liegl said. “I think people just get excited about shoes … it was funny—I actually heard a story that after [the design made for the IPO was unveiled] some of our employees started putting Slack stickers on their shoes to mimic the shoes.”

The ads were also timed around Slack’s annual user conference this week, where they announced new features in the works like inter-company direct messages.

Liegl, who started at Slack about a year and a half ago, had to drastically reimagine the company’s marketing message when the pandemic started to upend U.S. workplaces in March. The company had previously pitched the platform as a competitor with more legacy office communication methods like email.

But Liegl said that framing wasn’t always compelling to institutions bogged down by inertia, and the pandemic opened up a natural inflection point where companies were forced to rethink all of their internal workflows.

“It wasn’t a solution that people were necessarily out seeking at that time. Why do I need channel-based messaging? Why is working this way better than the way that I’m working today?” Liegl said. “What we’ve seen from the shift to the pandemic is such an acceleration of people looking for these different ways to work these different ways to engage.”

Slack also recently resumed out-of-home advertising spend since pausing it during the quarantine–albeit with a focus on residential areas where people now spend more of their time than office districts. One exception is a buy for some giant screens in Times Square.

“We are moving back to investing dollars and out of home—but we’re going to do it obviously a little bit differently,” Liegl said. “We’re looking at new locations outside of core business centers because people aren’t necessarily commuting to the office. And it might be more valuable to have a billboard near a grocery store, which is where people are actually going as opposed to the train station right next to downtown in a major city.”