The everyday ease of iMessages comes to ecommerce 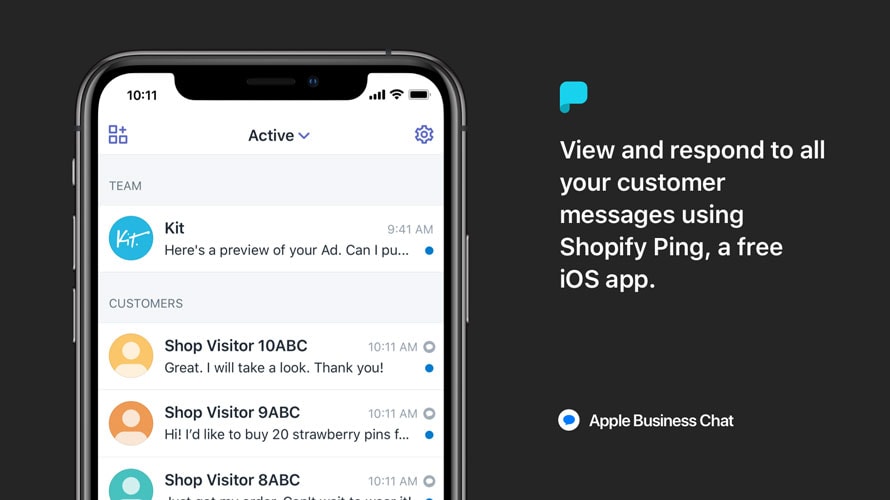 Via Shopify Ping, consumers can communicate with merchants in real time through iMessages.
Apple
Share
By Emily Bright
|
June 26, 2019
Share

Shopify and Apple have partnered to help entrepreneurs communicate more efficiently with consumers.

Last year, the ecommerce platform introduced Shopify Ping, a mobile app that connects merchants with their customers. But how to further bolster the success of entrepreneurs and online businesses? Enter: Apple. With Apple Business Chat via Shopify Ping, consumers can communicate with merchants in real time through iMessage on iOS and can also securely check out items with Apple Pay within the conversation.

“Our integration with Apple Business Chat will uniquely allow our merchants to establish, maintain and communicate with their customers directly through Messages,” said Michael Perry, director of product at Shopify. Shopify has over 800,000 merchants that will be able to use Apple Business Chat to give them the advantage of real conversation.

Retail studies show that customers who conversationally engage with a brand are nearly three times as likely to complete a purchase. So Shopify and its brands, such as Kylie Cosmetics, Unilever, Allbirds and MVMT, are hopeful for success with Apple Business Chat. As well as big brands, small businesses flourish through Shopify by expanding their markets and creating close bonds with their customers.

Perry, who grew up in small family businesses, recognizes the importance of a strong connection between entrepreneurs and their customers.

“There is nothing more sacred than someone standing on the other side of the counter and asking you questions about your product and building a relationship with them. What’s very unique about Apple Business Chat is that it’s integrated with Apple Pay. So if you ask a question about a product, you can actually check out directly inside the conversation. … It’s a digital version of buying from a local merchant,” Perry said.

Hodinkee, an initial merchant at Shopify, has already started using Apple Business Chat via Shopify. Hodinkee is an accessible watch-focused media site and ecommerce platform. The brand has been using Shopify for its ecommerce platform since 2012, and, according to Russell Kelly, the chief commercial officer of Hodinkee, Shopify has been able to easily accommodate the fast growth of the business by expanding their platform alongside the business and continuing to connect customers to Hodinkee directly.

“Apple Business Chat has been a great help because it’s integrated seamlessly within Shopify. It allows us to work within a platform that we’re already comfortable with to very quickly communicate with our customers in real time through iOS and Apple Messages,” Kelly said.

“There’s something just really beautiful about entrepreneurs having the courage to go build their business and build their dreams. I cannot think of a more powerful way to do that than to talk to their customers,” Perry said.