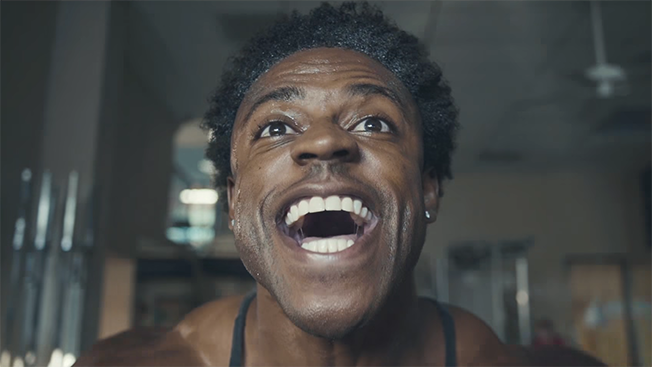 Given the number of exercise-themed ads and well-toned models gracing our screens every day, it's quite easy to forget that voluntary exercise is a relatively new phenomenon. The first "gymnasiums" opened in Persia 3,000 years ago, but recreational workouts as we know them today didn't get popular until the jogging and aerobics crazes of the '70s and '80s and the gym industry boom of later years.

A new campaign promoting Samsung's Galaxy S7 + Gear Fit2 watch reminds viewers that the very idea of setting aside time to gather in a common space and force ourselves to do physically uncomfortable things in the interest of improving our health and appearance is actually pretty damn weird.

No, really. Think about it.

Each January, frequent gym-goers roll their eyes at the newbies who joined as part of a New Year's resolution that often ends in February. But in the next spot, Wieden + Kennedy Portland pokes fun at the fact that this happens outside your local Equinox as well—and it can be a recurring struggle for regular Joes.

In the final ad, fantasy and reality meet on a Manhattan street corner; awkwardness ensues.

Wieden + Kennedy has taken a similar "how weird is this" creative tack in the past, most prominently with ESPN's "It's Not Crazy, It's Sports" campaign. One may note the dramatic difference between the men trying valiantly to lose a few pounds in the "Honey" and "Mannequin" spots above with the extremely idealized figures in W+K's most recent work for Equinox.

This comparison also serves to illustrate how the exercise industry has changed over the past 30-plus years, moving from Jane Fonda's VHS aerobics to "luxury gyms" complete with spas, juice bars and "gleaming white bathrooms with fluffy towels."

That said, Samsung has a clear message regarding the Galaxy S7 + Gear Fit2: It can help you organize your workout and stick to a plan whether you're a rough Tough Mudder or a (very) reluctant runner.

Ad: "Working Out Is Crazy"