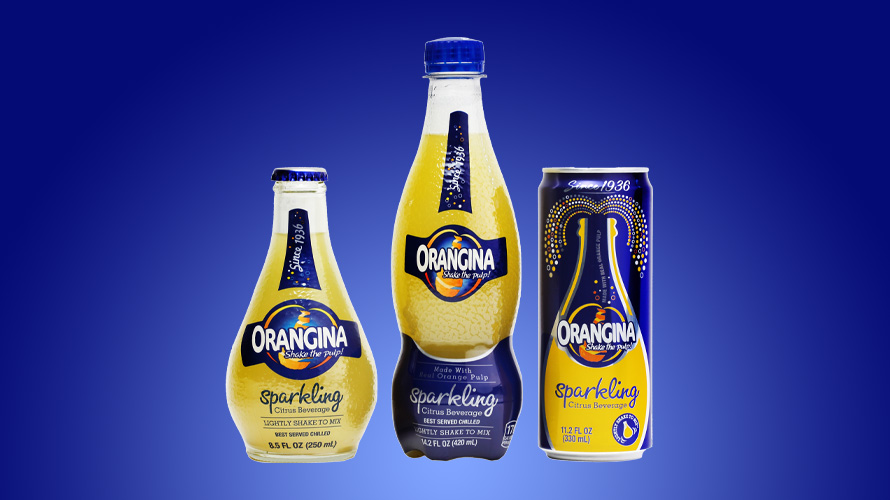 The drink is now available in three kinds of packaging, including the iconic glass bottle. Felicia Perry Trujillo, Food Seen

Over the past few years, what’s old has become new again, with brands banking on nostalgia to engage and attract younger consumers. Every category has seen some form of this, whether it’s the rebirth of Dunkaroos or Zima’s brief return to the beverage aisle.

Now, in a world full of seltzer, alkaline water and Soylent, the fizzy, citrus-flavored Orangina is back in the U.S. and Canada. While the brand has a new owner, Ventures Food and Beverage (VFB), the drink remains true to its original 1936 recipe. The iconic pear-shaped glass bottle has returned too, along with two new designs.

The 84-year-old brand has seen a number of owners throughout its life, most recently Keurig Dr Pepper, which changed the original formula in North America to include high fructose corn syrup. Elsewhere around the world, Orangina is owned by Suntory Brands, where the original recipe has been kept intact, with 12% juice. VFB, an accelerator group under Pepsi Bottling Ventures (PBV), is majority owned by Suntory (Orangina is not affiliated with PepsiCo).

The company has come up with a three-year plan to reinvent the drink as well as create a new category of beverages, dubbed sparkling juice. As part of its official unveiling today, Orangina worked with Clean, a North-Carolina based agency to produce the merchandising and marketing materials, which encourage consumers to “shake the pulp,” a nod to the brand’s original packaging (and actual need to shake up the ingredients, including the mandarin orange pulp).

A comeback with a twist

While some consumers might feel a nostalgic pang for the Orangina of their youth, others might not know the brand at all. That’s not the case in Europe, where Orangina is the fourth largest beverage brand. In France, it’s the No. 1 carbonated orange soda, according to Nisler. So, as Suntory noticed North American sales declining “significantly” over the past 15 years, the company knew it needed a relaunch in this region.

Welcome the glass, pear-shaped bottle, retailing for between $1.89 and $1.99, which also showcases why consumers should shake it up (you can watch the pulp settle after shaking the drink). But glass isn’t welcome in all places—such as airports—or by all types of consumers—like parents with kids. The glass bottle, while fun and whimsical, also doesn’t always fit the coolers of convenience stores across America. And while glass is seen as a better alternative to plastic, the material still requires a large amount of energy to produce and carries a significant environmental impact because of shipping requirements.

“All I know is that in all the testing we’ve done over the past year, every single consumer is excited about seeing this come back,” Nisler said. “And I haven’t actually heard anybody talk about the sustainability piece.”

“We saw the demand on the customer side and decided to go ahead and move forward with [the glass bottle],” Nisler said.

“The glass is great because it’s iconic,” said Frank Mercante, brand development manager for the Northeast at VFB. “Being able to bring that [packaging] back to life is awesome because it just really looks nice on the shelf, the feel and everything. It really brings people back.”

Plus, some glass bottles end up being cycled by consumers, Nisler pointed out, such as people filling them up with sand from their favorite beach. The brand also believes consumers will get nostalgic about the glass bottle—a KPI it’s banking on.

How Orangina plans to reinvent itself for consumers

Some stores, like Price Chopper Supermarkets and Fairway Market, already have the new bottles with the old recipe, and with it new merchandising materials created by Clean. According to Glen Fellman, vp and executive creative director at Clean, his team couldn’t look at past agencies’ work to see how to build upon it because there wasn’t any. Instead, Fellman said he dug through old TV spots and found common threads throughout the years, such as the need to shake up the drink.

“It really became something to tie into for a very foundational part of the brand resurgence,” he said. “It is an experience because it makes you pay attention.”

So, the Clean team decided to lean into the idea of “shaking the drink” with the tagline “Shake up the everyday.” In doing so, the brand attracts those who already knew Orangina and brings in newcomers to both the drink and the category. Orangina is being positioned as a sparkling juice—not quite a sparkling water, but not a soda either.

“We want to position it not as a special occasion drink, but a special drink for any occasion,” Fellman said.

While Clean wasn’t part of product or logo design, the agency is in charge of the merchandising, experiential marketing, sales kits and influencer material. Fellman said the Clean team needed to think through the different ways Orangina would sit on shelves, from a grocery store to a convenience shop.

“They have very tight systems in place for what they can place on the shelves or what they’re willing to stick on the shelves,” Fellman said. “We had to think about things they would allow us to do. Every square foot is money. There was a very concerted effort to create a system of merchandising assets.”

Nisler summed up the three-year plan to raise brand awareness and sales as “incubate, accelerate and establish.”

The first year revolves around bringing Orangina back to key markets including New York, Boston, Southern California, Montreal and Toronto. To do that, Orangina will work with local distributors to explore street fairs and outdoor markets where samples of the product would be offered. And since the brand is locally focused, as opposed to a national rollout, it can better work with distributors to set up sampling in a grocery store or be featured in a shop’s app. The first year also includes developing its social media presence and working with micro influencers.

In year two, Orangina is planning to expand into more markets and work with bigger distribution partners. It also plans to go further into the “experiential side of marketing and advertising,” Nisler said.

By year three, Nisler said the brand aims to be everywhere the consumer is, which is where ecommerce comes into play.

“We’re gonna have a push-pull strategy: The push is making sure sure that people can find it, it’s in the store,” Nisler said. “And then the pull is making sure that consumers know about it, and they come in and demand it.”

A slow and steady distribution plan

As it stands, Orangina has nine distributors including Honickman, Sysco and KeHE. By April, it is set to be available at numerous retailers, including Price Chopper Supermarkets, Fairway Market and Key Food.

As part of the launch, Orangina has developed a website where customers will be able to find out more about which products are available and where.

Distribution will expand beyond just grocery and convenience stores. The Orangina team wants to bring the drink into restaurants, and even into new formats like an Orangina ice cream float at Walt Disney World in Orlando, Fla., where the drink is available at the French Pavilion at Epcot.

“It’s an iconic brand,” Mercante said. “So when I’m talking to a customer, they’re already familiar with it.”