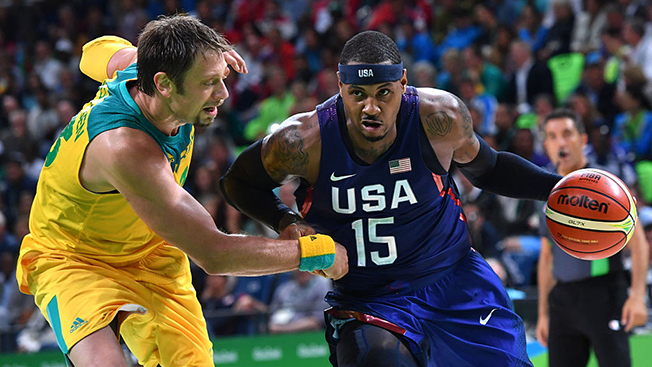 Team USA once again had a great night in Rio, staying on top in the medal count (now 32). Here are the most important stories for marketers to know about the last 24 hours of the Olympics:

Here's the leaderboard as it stood going into Thursday:

During the first quarter of the United States' game Wednesday, Carmelo Anthony became the country's all-time leading scorer, with 276 points. He ended the game with 31 points, making his total 293. (NBC Olympics)

Americans beat Australia by just 0.90 seconds Wednesday in the 4×200-meter freestyle, giving Katie Ledecky another gold medal—her third at the Rio Olympics. The U.S. was trailing during the first three legs of the race, but then Ledecky entered the pool. (ESPN)

The Olympic water polo pool has joined the diving pool in turning green, and Rio officials don't seem to have a clear answer for why. Possible explanations include an algae bloom, a sudden change in alkalinity or a lack of proper water treatment chemicals. (CNN)

Canadian sports retailer Sport Check is using real-time footage of the Rio games for its 90-second spots in its #WhatItTakes campaign. The spots, which highlight Canadian Olympics accomplishments, appear first on social feeds and then on television, and the first spot saw 2 million views across social media. (Adweek)

In Defense of Yulia Efimova

Washington Post columnist Sally Jenkins wrote a compelling piece in defense of demonized Russian swimmer Yulia Efimova, who drew snide looks and comments this week from U.S. swimming star Lilly King. "The facts of Efimova's case aren't nearly so clear cut despite the self-righteous Cold War shunning of her," Jenkins writes. "It's worth looking a little more closely at the human face of Efimova and maybe even standing in her place for a minute." (Washington Post)

The U.S. swim team has seen amazing success in Rio from athletes like Michael Phelps, Katie Ledecky and Lilly King. According to USA Swimming CMO Matt Farrell, moments like this make his job a lot easier to stoke membership on swim teams. (Adweek)

Chance the Rapper stars in Nike's latest ad "United Together," created by Wieden + Kennedy New York. He also wrote the lyrics for "We the People," the song inspired by The Star-Spangled Banner, featured in the ad, which aims to bring together U.S. basketball teams. (Adweek)

Bubba Watson is featured with an insane jetpack golf cart in his latest viral video for Oakley sunglasses. The spot, which has almost 1 million views on YouTube, is also an Olympics promo for Oakley. (Adweek)

Nationwide's Jingle Gets a Modern Tune-Up in Ogilvy's Olympic Spots

Brad Paisley and Rachel Platten are "on your side"—the pair performed expanded versions of Nationwide's jingle in the insurance company's new spots from Ogilvy & Mather. The spots tell "the whole story of what Nationwide is and how we can support our members through their life stages," says client CMO Terrance Williams. (Adweek)