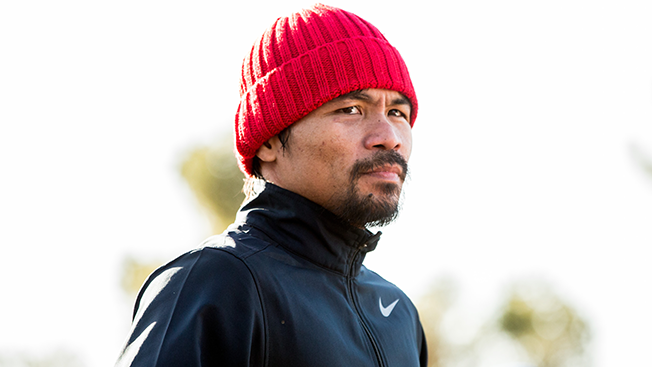 Nike will no longer be endorsing Manny Pacquiao. The brand's decision to cut ties with the boxer follows backlash over homophobic remarks he made on Filipino television, saying people in same-sex relationships are "worse than animals."

"We find Manny Pacquiao's comments abhorrent," the brand said in a statement today. "Nike strongly opposes discrimination of any kind and has a long history of supporting and standing up for the rights of the LGBT community. We no longer have a relationship with Manny Pacquiao."

Pacquiao, who serves as a member of the Philippine House of Representatives and is running for a seat in the country's senate, made the controversial remarks during an interview that ran in the Philippines on Monday.

Brands like Foot Locker, Nestlé and Wonderful Pistachios have also worked with the fighter, whose long-awaited bout with Floyd Mayweather Jr. last year was considered by many to be one of the biggest sporting events of all time. Foot Locker and Nestlé did not immediately respond to requests for comment.

As for Wonderful Pistachios, the brand says the last time it worked with Pacquiao was 2015, when it reaired his 2012 "Get Crackin'" spots.

"Wonderful Pistachios is not currently affiliated with Manny Pacquiao nor do his views align with ours," said the brand's spokeswoman, Jennifer George, in a statement. "Wonderful Pistachios stands firmly for diversity and equality, and we proudly support marriage equality and inclusion around the world."

"I'm sorry for hurting people by comparing homosexuals to animals," Pacquiao said. "Please forgive me for those I've hurt. I still stand on my belief that I'm against same-sex marriage because of what the Bible says, but I'm not condemning LGBT. I love you all with the love of the Lord. God Bless you all, and I'm praying for you."