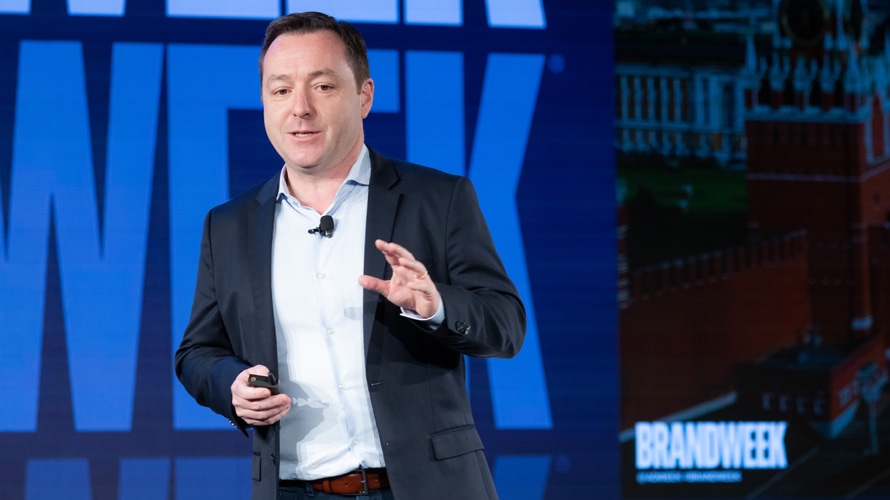 At Brandweek, Heneiken CMO Jonnie Cahill urged the marketing industry to return to its roots, bravely push the line and focus on the fun.
Sean T. Smith for Adweek
Share
By T.L. Stanley
|
November 7, 2019
Share

As the CMO of Heineken USA, Jonnie Cahill has more data about consumers and tools for how to reach them than ever before. He’s tuned into the latest developments in programmatic advertising, and he’s steeped in media mix, awareness and impressions, just like marketers across every category under the sun.

And while those tactics are important, they’re a bit of a red herring, the exec said during a Ted Talk-like session at the Brandweek summit.

Analytics-driven approaches are “the timely, smart, efficient, right thing to do,” the Dublin-born Cahill said on Wednesday. “But they mask the fact that we’re not having enough conversations about the things that make people smile.”

Brand communications need a joy infusion, he said, because as an industry, “We’re prioritizing measurability over magic.”

The exec, whose tenure at Heineken has included stints in Russia and the Netherlands, sells beer for a living. Or does he? In fact, he and Heineken sell “first kisses, dancing, bad jokes that are funnier than they should be and if we’re lucky, second kisses.”

Oreos, meanwhile, hawks not just cookies but “parenting, joy, childhood, getting home for a bedtime story,” and Rolex shills “achievement,” not just timepieces. “It’s not a watch,” he said, “it’s a stamp.”

At an environment where consumers are inundated with choice, brands must be in the feelings business, Cahill said, using a blend of logic and magic, science and art, intellect and instinct as a competitive advantage.

Risk-taking, as opposed to playing it safe, is also a key component, he said, using an example of a product placement on Comedy Central’s The Daily Show with Trevor Noah. Writers and producers of that cable series decided they wanted to use Heineken 0.0, the new non-alcoholic beer, in a skit. And while they notified the brand, they didn’t allow any interference (and certainly no script approval).

Armed with a few regular-strength Heinekens and his rosary beads, Cahill watched the deal unfold on TV at the same time regular fans were watching.

“You can imagine the stress,” he said, noting that the series “overindexed with the right target audience” and fit on so many levels that turning it down would’ve been foolish.

The result played out like a cheeky ad for the new product in the middle of the politically-minded late-night show. “Thankfully, it worked,” Cahill said.

He challenged both fellow marketers and their agencies to step up their game. If a brand sends a ho-hum, unimaginative brief to their agency, for instance, he urged the creatives to send it back. (He uses his 12-year-old daughter as a bellwether on his briefs, he said. If she gets it, it’s worth passing along.) “Crappy agencies take whatever brief you send.”

Nothing good comes of a culture of insecurity and a cover-your-ass mentality, he said, quoting the classic truism, “Shit in, shit out.” He urged the industry to return to its roots, bravely push the line and focus on the fun.

Cahill evangelized for improving the lives of consumers and aligning with events and properties that are ownable and distinct. Heineken, for instance, “couldn’t swallow” an NFL partnership but it could build bars at high-traffic stadiums in Washington, D.C. (situated on the roof so fans can watch games with a view of the White House) and Los Angeles (where LAFC fans designed those watering holes, showing Heineken’s willingness “to let go, to give away control.”)

“It’s the what, not the how,” Cahill said, “and if we as marketeers could remember that, we’d all be fine.”