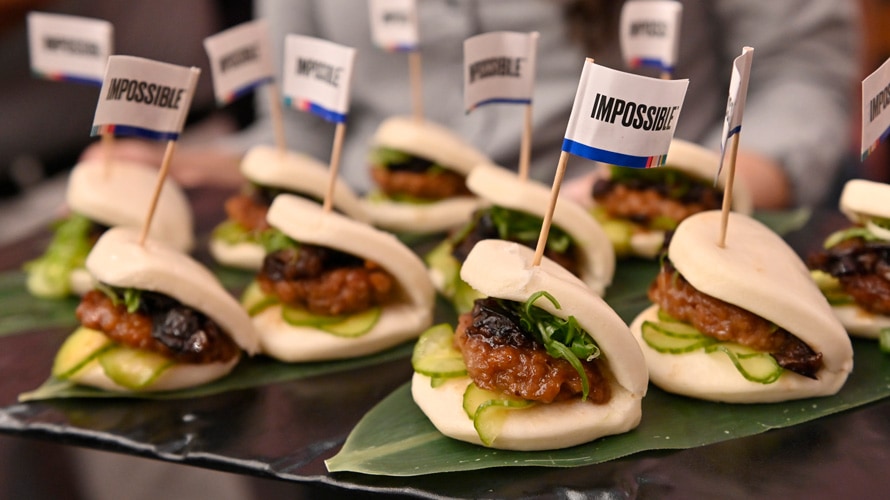 Riding the wave of popularity that meat alternatives enjoyed during 2019, Impossible revealed two new products to kick off the year: a meatless ground pork and a meatless sausage product.

Impossible made the announcement at CES, the world’s largest tech conference, in Las Vegas this week. The sausage will be featured in a new Burger King breakfast item, the Croissan’wich, which debuts later this month at 139 locations in five test regions: Savannah, Ga., Lansing, Mich., Springfield, Ill., Albuquerque, N.M., and Montgomery, Ala.

To create a meatless pork product, Impossible’s scientists faced a new set of challenges. Ground pork has a much different mouth feel than ground beef, Impossible Foods’ chief communication officer Rachel Konrad told Adweek. It’s much springier, has a higher fat content than ground beef and a much subtler flavor. Pork is also often a “vehicle for other flavors coming with it: cilantro, shallots, Sichuan peppers,” she added.

In celebration of the new launch, Impossible is giving out about 25,000 samples of burger and pork products at CES, said Konrad. The brand hopes to expand the availability of new pork and sausage products to Burger Kings nationwide after the pilot.

Though Impossible may seem an unlikely CES exhibitor—it’s the only food company of the 4,500 CES 2020 exhibitors—Konrad said it shouldn’t be. The problem, she said, is that people just don’t think of food as a tech product.

“We are here because we want to completely destroy the narrative that somehow food is not tech,” said Konrad. “It is the most important tech on the planet. It literally sustains life.”

Impossible launched in 2016 with its signature ground beef product that “bleeds” like real meat thanks to a meat protein called heme that’s derived from yeast. Impossible is one of the top contenders in a growing market of plant-based meat substitutes that also includes its primary competitor, Beyond Meat.

While veggie burgers have been around for decades, Impossible and Beyond both target the meat-loving majority. That’s a shift in the industry of meat substitutes, which has generally targeted vegetarians who don’t necessarily want to feel like they’re eating meat, but give them a tasty option to eat or order at a cookout or a burger joint. Impossible’s product has become so popular that the brand is having to walk away from potentially lucrative deals, like a partnership with McDonald’s, because they cannot produce enough supply necessary to work with such a large-scale partner.

But as the environmental effects of meat production become an increasingly common concern among consumers, Impossible and its competitors are trying to prove that burger lovers can have their fake meat and enjoy it too. And customers are listening: Yelp’s data science editor, Carl Bialik, said that mentions of plant-based burgers in Yelp reviews increased by 65% over the past year. That statistic, he said, “makes it clear that consumers are in the market for more plant-based meals and brands are listening by beginning to make these more of a menu mainstay.”

And the craze is just beginning. With the expansion into the breakfast market with the new sausage Croissan’wich, Konrad points out that there are now Impossible meat alternatives for every meal.

“You can do the right thing for the environment—buy plant-based meat—for three meals a day,” she said. “A real positive outcome for people who love meat but understand the negative consequences of it for the planet and for themselves.”