twofifteenmccann spots will appear on broadcast and digital platforms 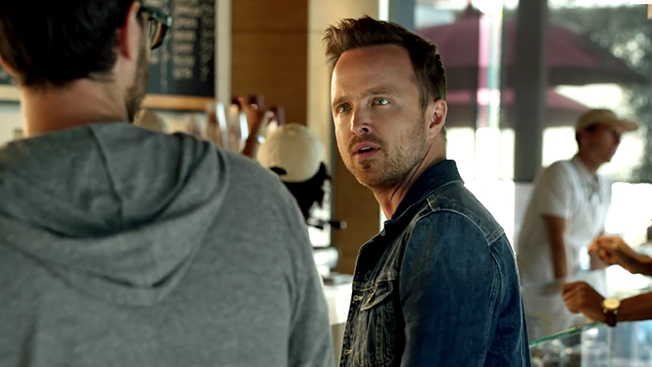 There's a record-breaking number of shows on television—we're at "Peak TV" after all—and it can seem impossible to keep up. Hulu is here to help in a new campaign from twofifteenmccann.

The 30-second spots (see below) explore the anxiety people feel when caught in a lie about having seen a recent episode of a TV show. One effort features Aaron Paul who currently stars in Hulu's original series The Path.

"In today's society, lying about watching a show or movie is nearly a felony in some people's eyes," said Scott Duchon, CCO of twofifteenmccann. "This campaign shows people caught in their own web of lies and offers Hulu as the way out. The Hulu team really wanted to have fun in the way they are positioned as the answer to this behavior."

The two spots released today will appear on broadcast as well as on digital and social platforms. A total of 10 spots were created. The others, including a spot with The Mindy Project's Mindy Kaling, will roll out later this year.

As part of the effort Hulu is using the hashtag #TVConfessions and encouraging fans to post their own lies about TV online.

"We've spent the last year solidifying our brand identity and what we want Hulu to stand for," said Jenny Wall, CMO, Hulu. "A large part of that work meant continuing to educate new audiences about what Hulu is and what we have to offer from a functional standpoint. As we've seen marked improvement in people's familiarity of Hulu, we recognized an opportunity to continue extending our brand into the lives of consumers in a fun, human and emotionally-relevant way."