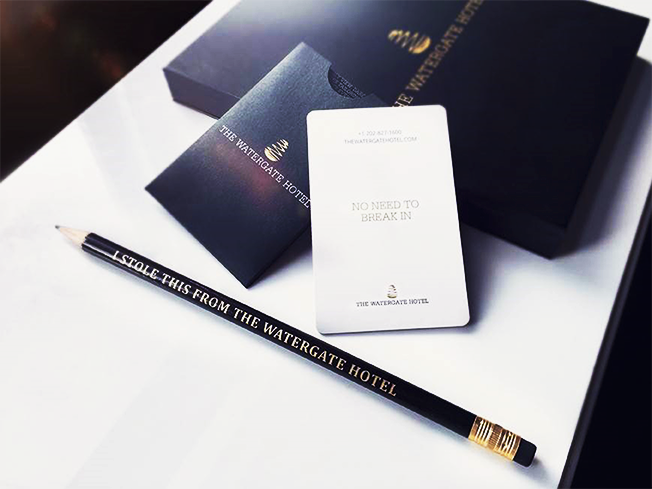 When Euro Capital Properties, owner of Washington, D.C.'s legendary Watergate Hotel, was putting the final touches on its $125 million renovation of the 1967 landmark by the Potomac, it had a delicate piece of business to consider. Marketing the hotel's glamorous new interiors—which architectural firm BBGM reinvigorated to reflect the hotel's jet-age heritage—would be pretty straightforward. But another part of the hotel's heritage posed a problem. Nixon after his 1974 resignation  Getty Images

The Watergate Hotel once housed the Democratic National Committee, the offices that men working for President Richard Nixon's re-election committee broke into on the night of June 17, 1972. The event touched off the biggest political scandal in American history. It resulted not only in Nixon's near impeachment and ultimate resignation, but also the suffix "-gate" (as in "Monicagate" and "Deflategate") as cultural shorthand for any debacle involving deviant behavior.

Ignoring the hotel's past was, of course, impossible. But how do you work shady history into a marketing plan? (For a list of hotels with shady histories, scroll down to the sidebar.)

"The scandal was just a little part of the hotel's history, yet that part is what people remember most," said Rakel Cohen, Euro Capital's svp of design, development, marketing and communication. "That's why we couldn't completely ignore the scandal—but [we] didn't want to overdo it."

Like, say, naming the bar Tricky Dick's? That was definitely out.

Given that the Watergate—then and now—has always been a swank hangout, a place where D.C.'s power players clink martini glasses, Cohen decided to address the scandal with what she calls "playful little details."

For example, Cohen took the otherwise ordinary key cards to the rooms and had them printed with "No Need to Break In." She also customized the complimentary pencils in each room, stamping them with gold letters that read: "I Stole This From the Watergate Hotel." (Cohen confirmed that the hotel has ordered an ample supply of the pencils in expectation that the guests will indeed steal them.)

The touches are just enough to bring a smile to the faces of those old enough to remember the Nixon years, and arouse some curiosity in those who don't. At the same time, nothing was overt enough to be distracting. "Guests who pay attention to detail will certainly pick up on it," Cohen said, "but it could just as easily be overlooked." 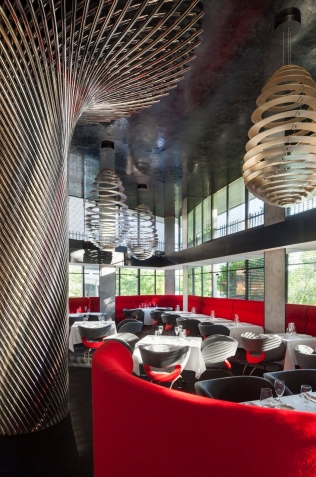 In fact, all but the hard-core history buff would overlook the hotel's main switchboard number: (844) 617-1972. Leaving off the area code, the number signifies the date that five burglars were arrested.

Cohen points out that the DNC office break-in actually wasn't the first time the Watergate found itself as the subject of disapproving Washington whispers. The hotel was designed by Italian architect Luigi Moretti, who'd found favor with Mussolini and later served prison time for his fascist loyalties. Moretti's undulating, curvilinear design for the hotel—which clashed brutally with Washington's neoclassical cityscape—was roundly condemned when it opened in the 1960s. A critic for The Washington Post famously wrote that the Watergate was as appropriate to Washington as "a strip dancer performing at your grandmother's funeral."

In time, however, scandals soften—and some of them turn into effective marketing tools. Cohen hopes that's what'll happen with the Watergate, assuming it hasn't happened already. "We needed to address the scandal," she said. "But certainly didn't want it to be a focus point because the hotel is so much more glamorous than that."

Indeed so. Among the most glamorous spots is the Kingbird restaurant just below the main lobby. And if you happen to be eating there, be sure to visit the restroom. Instead of the usual piped-in music, you'll hear—what else?—excerpts from Nixon's notorious Oval Office tapes. The Chelsea Hotel hosted many famous guests, one of whom left in a stretcher. Getty Images

Management's Response: They tore down Room 100 after the scandal, and the website for the hotel (under renovation until 2017) makes no mention of the incident. Scandal: It is said to have been haunted since 1911, when an acetylene lantern mysteriously exploded and blew the housekeeper into the next room. Unexplained sightings at the mountaintop lodge later inspired Stephen King's novel The Shining.

Management's Response: Welcome those ghosts. The website has a "haunted history" page, and the hotel offers a Ghost Adventure Package. Seedy and scary, the Cecil is today a hipster haven called Stay on Main.  Getty Images

Scandal: It's been the site of numerous suicides, along with the residence of serial killer Richard "Nightstalker" Ramirez.

Management's Response: None. Recently reopened as Stay on Main, the hipster hotel makes no mention of its past. The hostelry's owners are happy to talk about murder—just axe them! Getty Images

Scandal: Home of Lizzie Borden, accused (and later acquitted) of killing her father and stepmother with an axe in 1892.