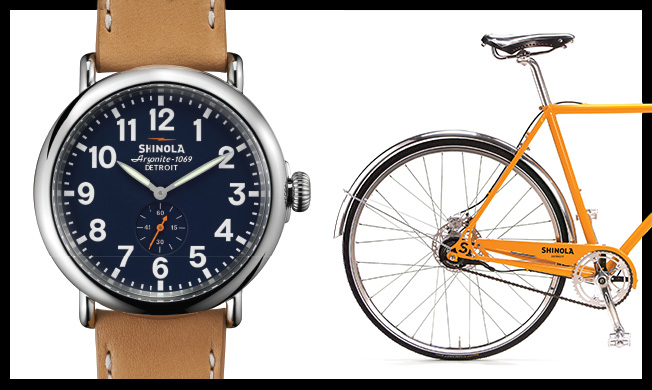 You had to know your U.S. history to fully appreciate the gag on ABC's Jimmy Kimmel Live on May 21. Two contestants, Guillermo and Yehya, stood on a set made up to look like that of a game show, as a shapely assistant presented each with a pair of luxury products—a watch and a leather shaving kit. The sparkly toothed host hit the gentlemen with the money question: "Which of these products is shit, and which is Shinola?"

It wasn't much of a contest really. The products made of excrement really did look like, well, shit, which is why Kimmel's crew thoughtfully provided large garbage cans in which to dump them. The contestants both ended up "taking home all this beautiful shit from Shinola," the host cracked.

As for the maker of those watches, Shinola, the sketch wasn't just for a laugh: It was a 90-second plug in front of an audience of 3 million.

"We found out that Jimmy Kimmel had bought a Shinola bike for his wife for her birthday, and our agency approached the Kimmel guys and they came up with this concept," explains Shinola CMO Bridget Russo. The brand had never before played up the famous "Can't tell shit from Shinola" joke (in case you haven't heard it, we'll explain later). But the Kimmel bit "helped communicate the brand and get it out in front of people," she notes. And yet, Shinola has done a solid job of getting out in front of consumers since it was started up four years ago. Its luxury products—which include wristwatches, leather bags and belts, bikes, iPhone cases, pocket knives, varsity jackets and more—have turned up on CBS, ABC and Fox, in Vogue, Vanity Fair and GQ, in Bruce Weber photos, and even on the wrist of a former president, Bill Clinton, who is such a fan that he purchased 14 of the company's watches last year.

It is unusual for an accessories brand to garner so much attention, but Shinola has the kind of story that feels tailor-made for post-recession 21st century America. At a time when mass-produced goods from China flood the market, Shinola has created a clean, functional and authentically American aesthetic that manages to feel both classic and modern at the same time. It is a brand committed to turning out high-quality products in America with, in as much as possible, American suppliers and American labor. To drive home that commitment, the company selected Detroit—the buckle of the American rust belt—as its base.

"Shinola is capitalizing on the backlash to the disposable and commercial world out there with an artisanal, handcrafted vernacular," explains Peter Clarke, CEO of the industrial design and brand strategy firm Product Ventures. "There's a kind of playback here to an American product aesthetic that is purposeful and utilitarian, and I applaud them for that."

The company has big plans. Though it has produced its coveted watches only since 2012, Shinola aims to have 16 retail stores in operation nationwide by year's end, with plans for as many as a dozen more each year going forward. (Shinola is eyeing European markets, too.) And while the manufacturer produces goods across a diverse range of categories—it is rare to find a wristwatch maker that also produces footballs and dog leashes, as Shinola does—the company plans to diversity even further, developing into a full-fledged lifestyle brand.

"We'll continue to diversify in categories that feel unexpected," Russo says. "Hopefully, in time, people will look at Shinola and think of Apple—a great American brand."

The upside to poop

Admittedly, it's all very ambitious for a company that didn't even exist five years ago. Shinola is owned by Dallas-based Bedrock Manufacturing Co., the venture-capital concern of entrepreneur Tom Kartsotis, a college dropout and former ticket scalper who went on to found Fossil watches and serve as its CEO from 1984 to 2000. Since relinquishing the chairman's post in 2010, Kartsotis has used his considerable fortune to fund his dream of reviving America's manufacturing identity. To this end, Bedrock has acquired brands like Filson, which began making clothing for outdoorsmen in Seattle 118 years ago.

Shinola is different in that it was created from scratch—sort of. Founded as a shoe polish maker in Rochester, N.Y., in 1907, the brand didn't become a household name until World War II, when, as the story goes, a disgruntled GI polished his commander's boots with poop, proclaiming that he "wouldn't know shit from Shinola."

That tale is largely forgotten, but the colloquial expression it gave way to has lived on and on. (George Carlin incorporated it into his legendary "Seven Dirty Words" routine in 1972—and, owing to obscenity laws, got arrested for it.) Shinola the shoe polish company went out of business in 1960; Kartsotis bought the rights to the name in 2011.

Most investor types would have run away from a brand with that kind of cultural baggage. And yet the mildly obscene saying is actually a central element of Shinola's positioning—"a differentiator in the marketplace," as Bedrock CEO Heath Carr has said.

And as the Jimmy Kimmel sketch demonstrated, Shinola's willingness to poke fun at its own name has established a refreshing corporate tone that speaks to the educated, affluent target customer base of consumers aged 30-50. The shit-from-Shinola adage, says Russo, "has a familiarity to it. People say, 'I've heard my grandpa say that!' There's a warm, fuzzy feeling about it."

Russo mentions that the expression—which reached its cultural apogee in the 1950s—also recalls "the heyday of American manufacturing, so for us it was the symbol of America's manufacturing legacy."

That's a legacy Shinola takes very seriously. "As a new company with a storied name," reads its website, "we're dedicated to the return of American manufacturing."

In 2012, Shinola set up shop in Detroit's Argonaut Building, built by General Motors in 1928. It is there that roughly 100 employees, many of them former auto workers, were trained by Swiss brand Ronda to construct watches Shinola sells for as much as $850—comparable in price to a quality Swiss timepiece. (The total workforce in the Detroit headquarters is around 300.)

Shinola is also committed to partnering with component manufacturers that are based in the U.S. For example, Shinola's leather comes from the Horween tannery in Chicago. Ann Arbor, Mich.-based Edwards Brothers Malloy supplies the paper for Shinola's cloth-bound journals. And the frames and forks for Shinola bikes are forged at Waterford Precision, operated by Richard Schwinn of Schwinn bicycles fame.

Every facet of Shinola's branding evokes American innovation—from its Wright Brothers Limited Edition Runwell bike (which retailed for $2,950, and which sold out) to its Bluetooth player with the Gramophone speaker ($400, with a waiting list of buyers). Even the brand's dual taglines sound like muscular boasts of Yankee ingenuity: "Where American is made" and "Built in Detroit."

Two generations ago, nobody would have noticed that a product was made in Detroit—simply because so many were. But the city's well-publicized fall on hard times (Detroit has lost half its manufacturing jobs and half its population, and is home to some 70,000 abandoned buildings) has spelled opportunity for Shinola, giving the company not only a ready source of workers but also a central role in the city's renaissance. As a new luxury line rising from the ruins, Shinola has become Detroit's red-caped good guy of entrepreneurism. 'Our stores are a big part of the marketing,' says CMO Bridget Russo.

"What's super-interesting about them is how they're aligning themselves with Detroit, using a city and its history as an anchor to their values as a brand," says Jonathan Dien, partner in the consulting firm Gravity Tank. "Their framing of American-made harkens back to heritage and a high level of craftsmanship, and it puts them into the luxury space in an aspirational way."

Shinola's timing is spot-on, according to Dan DiMicco, former CEO of steel company Nucor and author of the book American Made. "Americans know how much comes from China today, with all its quality issues, trade cheating, spying, stealing of intellectual property," DiMicco notes. "Americans are patriotic. They would rather buy American-made, but it's just very difficult to find it."

It is not difficult in Shinola's case, however. The brand has been expending much of its energies on building retail locations—which it also sees as its best advertising. Because Shinola positions itself not as a watch maker or an accessories company but, rather, a lifestyle brand, the company has created retail environments that surround, define and accentuate its products—much like retailers such as Ralph Lauren, Anthropologie and Apple have done. Shinola stores feature wide-open industrial spaces that are minimal but warm. Iron trusswork, weathered brick and varnished hardwoods abound. And you definitely won't find any plastic here.

"Our stores are a big part of the marketing," Russo says, "and experientially we keep those stores activated." Shinola stores host events like whiskey tastings and a pop-up barbershop for Father's Day. "We really want people to see the stores as part of the community," Russo says.

The American aesthetic has become such a well-worn trope that, in a sense, it has presented Shinola with some difficulty. Bloggers and consumers alike praise Shinola's "retro" look, while Nordstrom, which carries the brand, promotes its "vintage-inspired watches." All that drives Shinola's creative director Daniel Caudill up the wall.

"The only thing that's vintage or retro about the brand is the name," he insists, explaining that retro design equates to gimmicky design and is counter to everything his brand is about.

Any brand can appropriate an old design, Caudill explains, but "we're trying to design things that feel modern, new, clean and simple. It's not about trends; it's about function and how you use it. Things that never go out of style, that's what we're trying to create."

And create and create. Shinola confirms it is on the verge of launching a new line of products, one that will take the brand even deeper into the lifestyle category, though the company declined to divulge details just yet. "We've never thought of ourselves as just a watch brand but as a design brand," Russo says. "Tomorrow, we could make a toaster, as long as it's well made and made in the U.S."

And if Shinola does make a toaster, maybe Jimmy Kimmel will get one for his wife.