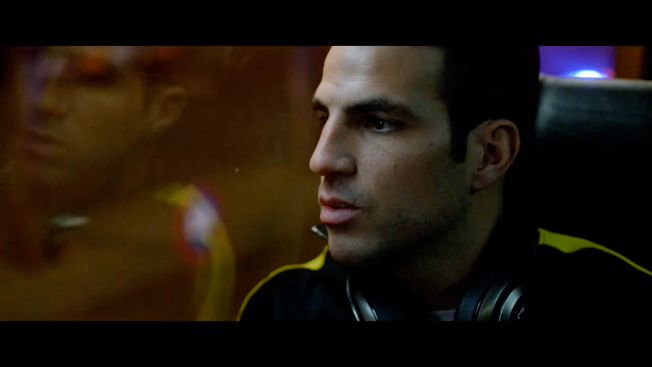 IDEA: People listen to music before playing sports to find rhythm, focus, inspiration. But elite athletes do so for more complicated reasons—not just to connect to positive influences, but to escape negative ones.

"As much as it's about their favorite songs, it's also about the noise they block out—from rival fans, other players, from the media," said Beats by Dre evp-marketing Omar Johnson.

Now, the fourth spot heads to Spain and an even more intense sports culture: the El Clásico rivalry between F.C. Barcelona and Real Madrid. The ad, starring Barcelona's Cesc Fàbregas, is a homecoming of sorts for the campaign (the original idea came from European soccer) and in some ways its riskiest spot yet.

"You see a lot of brands with an real insight, but they're afraid of putting it out there," said Johnson. "We're not afraid of that risk, if the message is authentic." COPYWRITING: Against an overhead view of Madrid at dusk, a Spanish radio voice, subtitled in English, talks of "the match that will decide Spanish glory." Suddenly we're at street level, seeing Madrid fans prowl the street.

Fàbregas leaves his hotel and boards a bus, under police escort, watching intently as the crowds swell, their chants grow louder, and the tension seems poised to become violent. Indeed, one fan throws a red flare at the bus. But Fàbregas calmly slips on his Beats, as Aloe Blacc's "The Man" starts to play.

The spot shifts to slow motion, and the tension gives way to a heroic calm that carries the player all the way to the stadium, through a crowded tunnel and into a quiet locker room. The tagline, "Hear what you want" (a line Johnson said came directly from an athlete), appears on screen, followed by a product shot.

The ad's feeling of menace is real: Athletes often do feel under threat. "The most intense stories are the ones where it gets really close, where it almost feels like physical danger," Johnson said.

ART DIRECTION/FILMING: Director Max Malkin constructs a darkly chaotic vision. The whole campaign has been filmed with anamorphic lenses (which the brand can finally afford.) "It needed to be shot cinematically to bring you into the emotion of the athletes," said Johnson. TALENT: Garnett, Kaepernick, Sherman and Fàbregas were all chosen for their key roles in a momentous rivalry. Fàbregas grew up near Barcelona, and thus was perfect. "He has experienced El Clásico not only as a player but as a fan," Johnson explained.

SOUND: Johnson and Beats co-founder Jimmy Iovine usually consider five or six tracks for any spot. This time, there was no debate. Aloe Blacc's "The Man," used on all four ads, "was the first and only song we ever played with the picture," said Johnson. "The ads go to a dramatic place, and that song brings them back to the light."

MEDIA: The Fàbregas ad broke March 23 to coincide with the latest El Clásico match. Barcelona's president tried to get it banned, fearing it sent the wrong message about hooliganism, leading Beats to reply that the events in the ad are "purely fictional."

PREVIOUS SPOTS IN THE SERIES: