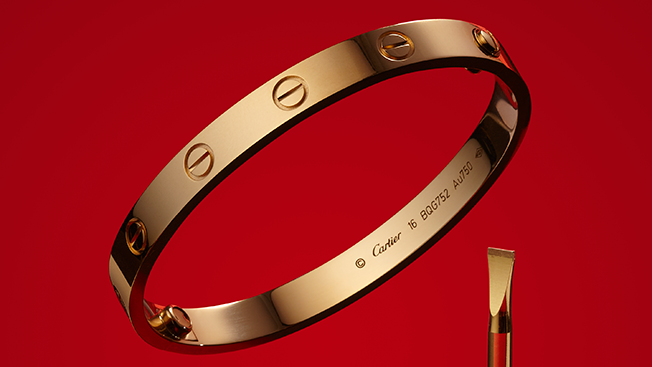 Hospital emergency rooms have to keep all sorts of equipment on hand, from defibrillators to occlusive dressings, to deal with any medical crisis. But in New York, where the gurney bursting through the door is just as likely to bear the rich and famous as not, several ERs are said to carry a highly specialized piece of trauma equipment. It's a tiny screwdriver used when the time comes to remove a Cartier Love bracelet. An explanation for the uninitiated: These oval-shaped bracelets are held together by two grub screws that, when tightened, lock onto the wearer's wrist. According to Cartier's website, this gilded bit of bondage is meant "to sanctify inseparable love." It also signifies high incomes: Bracelets come in three alloys of gold, with or without diamonds, and cost anywhere from $4,500 to $56,500.

But the thing that makes these bracelets different from other gold bangles is the craze that currently surrounds them. While Cartier has sold its Love bracelets for nearly half a century now, they've only recently become the hottest piece of status jewelry for millennials. Make that rich millennials.

"It's popular with younger, fashion-forward consumers because they want to invest money in something special, something of quality, something known worldwide as being a symbol of luxury that can be recognized by their peers," said Kyle Anderson, market and accessories director for Marie Claire.

Strange, then, that the Love bracelet made its debut well before any millennial was born. In 1969, Italian designer Aldo Cipullo (who'd built his reputation at David Webb and Tiffany & Co.) took a job at Cartier. Cipullo's creation—initially sold only to couples—was an instant hit, and thanks to some strategic gifting by Cartier's marketing department, Love bracelets found their way to the wrists of famous pairs including Robert Evans and Ali MacGraw, Dyan Cannon and Cary Grant, and Richard Burton and Elizabeth Taylor. Cipullo reportedly took his inspiration from the chastity belt, though a quick glance at the names above makes clear that the bracelets failed to keep their wearers chaste—or married, for that matter.

It did, however, keep itself in the public eye, and for long enough to be picked up by a new generation of beautiful people (who wear them more for prestige than as a symbol of commitment): Angelina Jolie, Lindsay Lohan and Salma Hayek wear Love bracelets. Kanye West is known to wear several, and he's not alone. "I've seen them stacked on young celebrities like Kylie Jenner and Justin Bieber in diamond pavé versions," Anderson said. Such exemplars, he added, "will have an impact on young shoppers due to their enormous social media following."

Unfortunately for Cartier, this impact has led to a spate of fake bracelets (some priced as low as $55), snapped up by glamour fans who don't happen to have thousands of dollars to drop on a bracelet. Alas, true love is rare—and expensive, too.