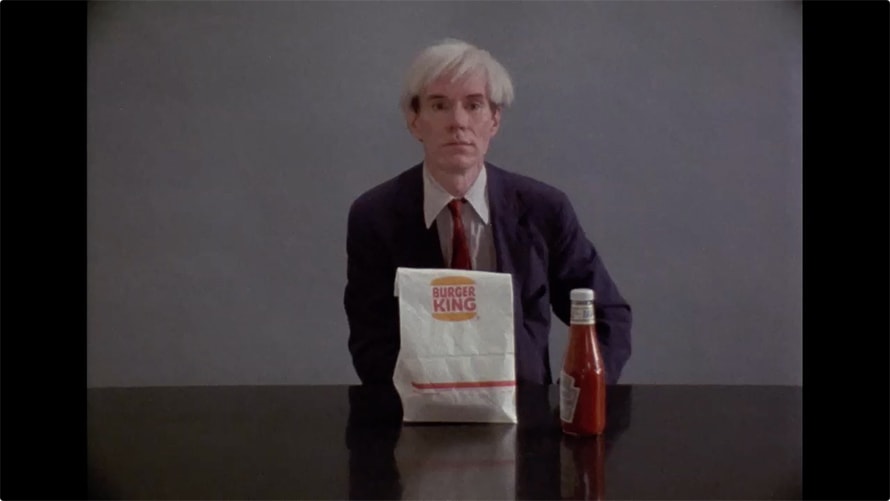 Burger King just aired 37-year-old footage of art icon Andy Warhol eating the company’s signature burger, the Whopper, during the Super Bowl. What was once documentary footage is now a 45-second ad for the fast-food brand—an exercise in the confluence of art and commerce, exactly the kind of meta commentary on consumerism that made Warhol famous.

Earlier this week, Adweek caught up with Burger King and David Miami to find out how the fast-food brand came up with the idea, what it took to put it together and how the brand expects the 100 million-plus Super Bowl audience to react.

While doing research for the fast-food chain, creative shop David Miami unearthed footage from the 1982 documentary 66 Scenes in America by director Jorgen Leth. The agency brought the footage to Burger King and over the last year worked to secure usage rights to air 45 seconds of the four-minute clip as part of the Big Game.

“It’s one of those things that when David brought it to us and we watched the film our heads exploded,” Burger King’s global CMO Fernando Machado told Adweek. “What are the chances that your brand will have an asset like that? It’s beautiful!”

Juan Javier Peña Plaza, executive creative director, David Miami, echoed that sentiment. “We thought, ‘What if we put this in the middle of the Super Bowl?’ he said. “And then everyone’s head exploded.”

Peña Plaza continued, “It was like, holy shit if we manage to put this in the middle of the biggest extravaganza of the year, we’re going to blow everyone’s minds. It’s so simple, and it’s sort of meta. You’re breaking the fourth wall in a way and messing with people.”

Burger King secured approval to use the footage for the ad, which aired during the fourth quarter of the Big Game, from The Andy Warhol Foundation.

“It took us a long time to align on what we would do and negotiate the use of this film with the Andy Warhol Foundation, who are really great partners, and I think it was the son of the director who owned the usage rights for the film,” Machado said.

The clip, which is mostly silent, shows Warhol taking a Whopper out of a Burger King bag, opening a ketchup bottle, dipping the burger in ketchup and eating it.

“The typical Super Bowl ad tends to be loud music, full of celebrities and really screaming loud to break the clutter,” Machado said. “We see our ad as breaking all the rules of the typical Super Bowl ad—our ad doesn’t have music, doesn’t have voiceover, is not 30 seconds, was not shot this year. Our ad was shot in 1982. I believe that it will act like a silent assassin during the Super Bowl—it will cut through the noise with silence.”

In January, Burger King released a cryptic 30-second teaser starring the King that Machado said makes more sense for viewers after they see the full ad. The same could be said for the mystery boxes the company sent out in partnership with Door Dash. The box contained a white wig, a ketchup bottle and old-school Burger King packaging.

Given the nature of the spot, “pre-releasing it was never on the table,” Peña Plaza said.

The fast-food brand used the first 45 seconds of the four-minute clip from the documentary as its ad.

“We are very respectful of his art,” Machado said. “We didn’t want to edit the film. That was never part of it for us. We picked the first 45 seconds to show Andy sitting there with the product.”

Machado added, “We didn’t change the format of the film, we didn’t try to retouch to make it better. It’s a grainy film because it was shot on film. In fact, we tried to match our teaser to that. Our teaser was also shot on film to get the same grainy quality that the original film has.”