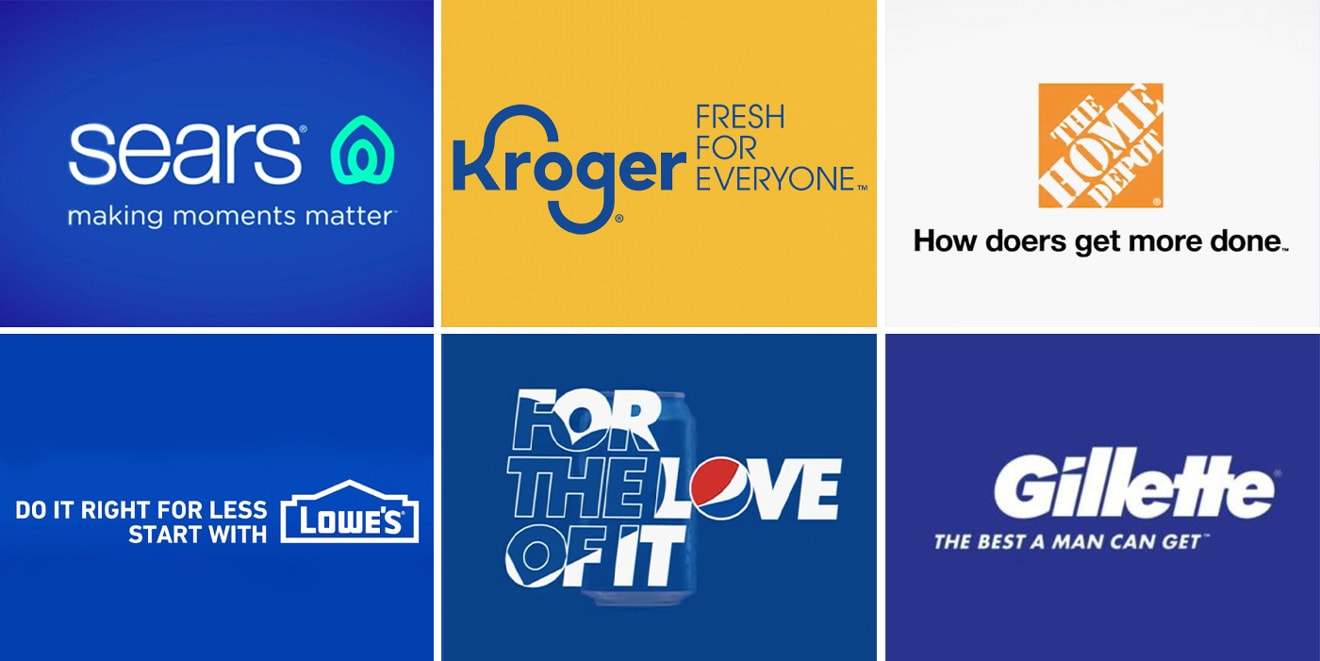 Brands made these switches for a number of reasons, whether it was to acknowledge a change in culture, make an emotional appeal or attempt to differentiate themselves from competitors. Jasmine Tanasy, executive director of naming and verbal identity at Landor, said that because of consumer demands, there’s more pressure than ever to for brands to reflect what consumers are looking for in their own identities. That pressure includes a tagline.

“Overall, we’re seeing established brands shift their lines to create relevance in a world where consumers have more choice than ever and are more vocal about what matters to them,” she said.

To connect with consumers, brands need to be part of an ongoing conversation that happens in real time, not just in those big moments punctuated at the end by a tagline.

But of course, an effective tagline doesn’t hurt. Here’s how those six brands evolved theirs in 2019.

Home Depot is one of the most recent retailers to alter course, changing its tagline from “More saving. More doing,” which debuted in 2009, to “How doers get more done.” The home improvement retailer’s long-time ad agency The Richards Group developed both campaigns.

With this change, Home Depot is shifting its emphasis from lower prices to capability, said Bruce Winder, co-founder and partner of the Retail Advisors Network consultancy. It’s a shift that makes sense: The new catchphrase builds on the retailer’s brand platform of being handy around the home, which has been a consistent message over the years, noted Hayes Roth, founder and principal of the brand consultancy HA Roth Consulting.

Home Depot competitor Lowe’s took the opposite approach, choosing to position itself as competitive on price earlier this year with its new tagline “Do it right for less.” Via Agency, EP & Co. and Conill were the creative forces behind the effort.

While Home Depot’s change was largely lauded by industry experts, Lowe’s received some criticism for its shift. “I don’t like Lowe’s hanging its hat on price, unless they can absolutely own it,” said Winder.

David Lemley, president and head of strategy at Retail Voodoo, said the Lowe’s approach loses a bit of the emotional value Home Depot’s new tagline was able to capture. “The average shopper is not going to be so motivated about savings,” he said.

In light of its 2018 bankruptcy filing, Sears and Kmart, which Sears owns, plotted its revival with new campaigns for both brands.

The new taglines for the two brands were developed in-house under chief brand officer Peter Boutros to made emotional pitches to shoppers: “Making moments matter” for Sears and “Love where you live” for Kmart.

At this stage, making an emotional appeal is a stretch for the department store banners, said Winder. Today, consumers likely have a negative association with the brands due to their recent financial troubles, which in turn, prevents them from embracing the taglines, he explained.

Sears’ management radically underestimated what it would take to salvage the brand, Lemley added. Instead, he said, Sears should have tapped into its roots as a mail-order catalog retailer more than a century ago (the original Amazon), offering rural America a way to purchase goods not readily available in their immediate areas.

PepsiCo tapped into nostalgia and targeted audience outside the U.S. with its new tagline, “For the love of it.”  It replaces “Live for now,” which debuted in 2012. Omnicom’s AMV BBDO was involved in the development of the new campaign platform for the company’s flagship cola brand.

“It feels like something I’ve heard and seen before, a little bit nostalgic,” Lemley said, and added that it may be a savvy tactic to tap into the mindset of 20 years ago.

But nostalgia could backfire, considering the change in consumer attitudes when it comes to concern about the health effects of sugary snacks and beverages. Growing public awareness in this realm remains a challenge for cola brands.

“Interestingly, brands like Pepsi decided to double down on positive feelings despite big changes in consumer eating habits and perspectives,” said Tanasy. “This position of love is a great way to keep people connected to things they enjoy but does little else to acknowledge their position,” she said, however.

The P&G-owned mens’ grooming brand made headlines when it tweaked its iconic tagline “The best a man can get” for the #MeToo era, changing the last word from ‘get’ to ‘be.’ Its AOR, Grey New York, was behind the tagline as part of Gillette’s “We believe” campaign.

“Gillette tweaked a long-standing line for a higher purpose,” Tanasy said. “From a business perspective this campaign was likely aimed to break through the suddenly crowded razor space. The associated campaign created a lot of buzz, both positive and negative, but firmly gave the brand a stand that is more aligned with their customers’ ethos.”

The razor brand first debuted the previous tagline during Super Bowl XXIII in 1989 during a BBDO-created ad promoting its Atra line.

In Winder’s view, it was a smart decision by Gillette to move in a more inclusive direction while keeping its memorable tagline largely intact. Lemley, however, said the change may have been too subtle for consumers to notice. He said he believes Gillette would have been better off to either not have changed the tagline at all or to overhaul it completely if the desire was to go in a new direction.

On the grocery front, Kroger unveiled “Fresh for everyone” with help from creative agency DDB New York.

Lemley said Kroger’s tagline is a nod to the democratization of the kind of fresh food experience once reserved for shoppers of organic-heavy chains like Whole Foods. He said it’s a smart formula to marry the overhaul of its grocery stores with a new appeal to consumers.