The creatives behind Art & Corny reunite for an indecent proposal 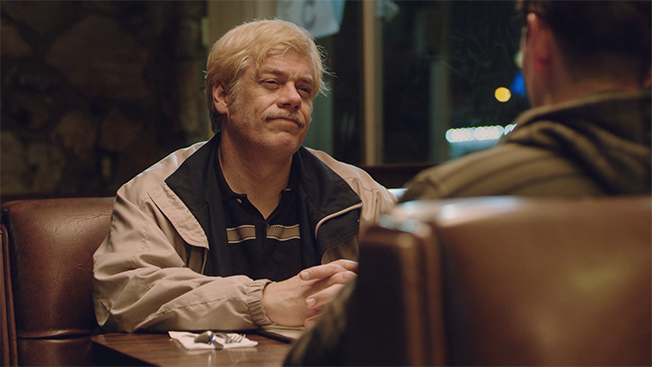 What would you do for a million dollars? That question is taken to its extreme in Gabriel Miller and Andrew Laurich's latest collaboration, the short film A Reasonable Request that recently landed a spot at the Sundance Film Festival. (The story, spoiler alert, is about a young man propositioning his father for the chance at a million bucks.)

You may remember Miller and Laurich as the ad men responsible for the mockumentary Art & Corny, which centered around faux ad icon Cornelius Trunchpole. Miller, who'd initially created Trunchpole as a lark, sparked a whodunit in the industry, with many assuming that titans like Gerry Graf, David Droga or Alex Bogusky were responsible for the cantankerous character. Instead, the elaborate ruse came from Miller, who at the time served as a copywriter for TBWA in London.

Before they head to Park City, Utah, where the festival takes place from Jan. 21-31, the duo explained to Adweek how being part of the advertising world helped them land one of the world's most competitive film festivals.

Adweek: Tell us how you guys met and how the Cornelius Trunchpole mockumentary Art & Corny came about.

Laurich: I'm a commercial director, and [Hershel Rephun] suggested investigating this fictitious character Cornelius Trunchpole that everyone suspected was Gerry Graf. Like, to look into doing pro-bono work for this character.

Miller: At that time I'd been on Facebook for the better part of six months cultivating a hoax on the ad industry, which was garnering attention in the States. At that point the person behind it was always anonymous. So when Andrew got in touch he thought he was talking to David Droga or Gerry Graf or something like that. He said he was a young director and that if I had any film projects in mind to think of him. At the time I'd just finished writing a mockumentary short film about the character, and I'd just been in talks with some directors and that sort of collapsed. He emailed me at the perfect time. It was literally just a case of, "you'll do."

Adweek: It's been a few years since that collaboration. What made you want to get back together to work on A Reasonable Request?

Miller: [After Art & Corny,] I moved to San Francisco to work at Pereira & O'Dell, where I worked until the start of 2015. But I had to move back to Europe because my wife is Danish and a doctor and couldn't work in the States. It was in moving to Copenhagen and suddenly having no job that I threw myself into this idea and trying to collaborate with Andrew again. At that point we'd been friends for a while but hadn't collaborated again since the Trunchpole days.

Check out the film here, intended for mature audiences only:

Adweek: How did you come up with A Reasonable Request?

Laruich: Gabriel had an experience with his dad.

Miller: Oh, yes, completely autobiographical [laughs]. … When you work in any agency environment for any length of time, it can be incredibly gratifying. But there's also this kind of constant background atmosphere of restrictions and client needs and just general "[Here's] what is acceptable in the public realm" taste wise. So there's a degree of constraint that can be fun to work within but also frustrating at times, so for someone like me, you're sort of naturally provocative and after years and years of restraint, when you're finally let loose there's going to be a louder bang.

Adweek: So as soon as you get a little freedom you go straight for incest?

Laurich: That's a great sexual metaphor. There's something telling in that. … The kernel of the idea came from "What would you do for a million dollars?" and taking that to its extreme. Gabriel suggested the storyline of a son and his dad doing a blow job for a million dollars. I think initially I was put off by it.

Miller: I don't understand the big deal. I've never had trouble thinking about it [laughs].

Adweek: Was Sundance always the goal?

Laurich: No. It became a challenge of, how do you take something so absurd and ground it? I approached it like a great scene study. But the short was never intended to get to where it is now.

Miller: We thought if we released it online ahead of Father's Day that we can create a little buzz online. At a certain point when you're releasing a short film you have to decide if you want to go the traditional festival route or if you want to put it on the Internet. We said, 'Screw that!' to waiting and released it on Father's Day. We sent it to a bunch of blogs to see if we could kick up some talk. Our advertising genes kicked in, to see if we could get some sort of virality out of this. It kind of worked, to the point where we had so many views on Vimeo and were on so many blogs that we thought we'd definitely screwed its chances with Sundance. There's no way they'd want to feature a short film that's already kind of well-known. But they seemed to overcome that.

Laurich: It was weird because it all kind of worked serendipitously. After we released it we'd gotten all sorts of buzz and also happened to get into Sundance. And after there was a Sundance announcement, Vimeo, which previously had declined to feature it as a Vimeo Staff Pick because of its content, suddenly lifted that restriction and Staff Picked it. And once it was Staff Picked it was in Vimeo's top 10 videos of the year.

Adweek: How did working in the ad world impact how you made this short?

Miller: From a copywriting perspective, you spend 10 years—I've been a writer in advertising for a decade—and you kind of spend all day every day writing these short-form pieces of content. If it's a 30-second spot or a 60-second spot or a digital spot, that's a couple of minutes. So to me as a writer, eight minutes is like an age. It's like a feature-length period of time to tell a story in, so when a lot of people respond to the film, [they're surprised] that you get a full story in such a short length of time, whereas from my perspective it's like, of course. I had so much more time than I usually have to work in.