In September, the media converged in Midtown Manhattan for a press conference with an outspoken, controversial celebrity with orange hair. He would take questions, the PR people promised. He would even do a little song and dance. 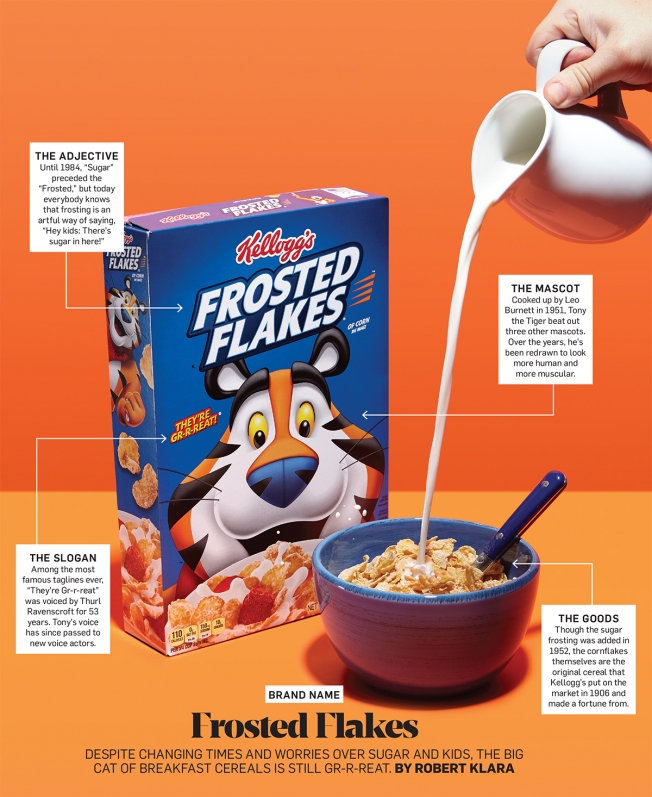 His name is Tony the Tiger, famed for the past 64 years for his basso profundo endorsement of Kellogg's Frosted Flakes ("They're Gr-r-reat!"). Newly rendered as a life-size animatronic costume by Jim Henson's Creature Shop, Tony was in town to shout out a new variant of that slogan, encouraging the kids of America to "Let your Gr-r-reat out!"

With sales of box cereal on the wane, Frosted Flakes has never needed its famous Panthera tigris friend more than now. Kellogg's' 2015 net sales fell by 7.2 percent, and Frosted Flakes tumbled 4.5 percent the year prior. 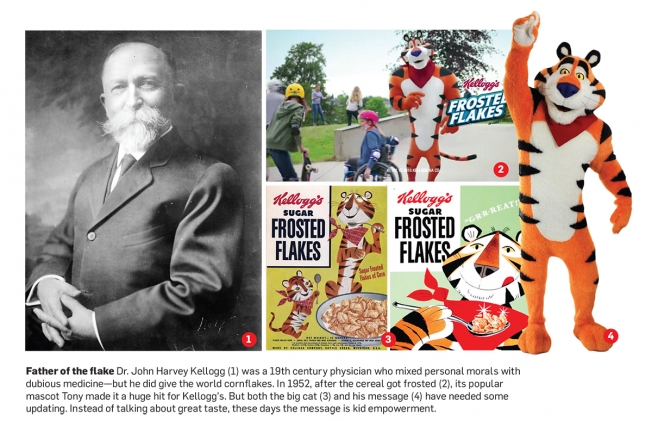 Yet even though its best days are behind it, Frosted Flakes is still a big cat—the No. 2 best-selling breakfast cereal, per Information Resources. Sales aside, it's just a really popular cereal. Six decades after its introduction, "Frosted Flakes' popularity goes on," said Eddy Chavey, better known as Mr Breakfast, a historian and expert on the day's most important meal. "I have this survey where people vote for the top 100 cereals, and Frosted Flakes is always in the top two. The reason is because it's a sugar cereal, a simple cereal and a great cereal."

Indeed, Frosted Flakes is all of those things. But to understand its appeal, one must understand its origins. Cornflakes were invented by accident in 1894 by Will Kellogg and his brother Dr. John Kellogg. As a religious zealot, Dr. John's many crusades included preventing boys from masturbating—an ill he believed could be remedied by healthy eating. Cornflakes didn't put a stop to the solitary sin, but it was a hugely popular cereal. It was, at least, until 1948, when competitor Post began rolling out dextrose-drenched brands like Sugar Crisp. To compete, Kellogg's applied a "frost" of sugar to its best-selling brand and—voilà—Sugar Frosted Flakes. (The "Sugar" would be dropped in 1984.)

As it turns out, Kellogg's biggest obstacle in the early days remains its biggest obstacle today: getting parents to buy a cereal that's tasty, if not exactly healthy. Corporate's solution—again, then as now—was a mascot. In 1952, Leo Burnett reasoned that a friendly looking animal would soften the hard sell. (In test, Tony the Tiger beat out rivals including Elmo the Elephant and Katy the Kangaroo.) Today, amid the backlash against processed foods, Kellogg's is turning to Tony once again—this time casting him as an athletic hero/coach who encourages kids to shine.

Will it be enough? Time will tell. But one thing's sure: He's become as iconic as that other cat in the hat.