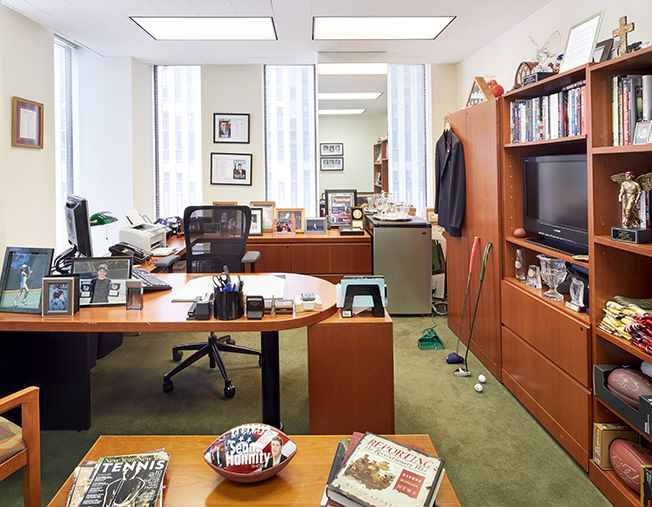 Sean Hannity is a big personality whose ratings reflect his wide appeal. His nightly program on the Fox News Channel, Hannity, averages 1.4 million viewers and this quarter enjoyed a 10 percent rise in the coveted 25-54 demo. Hired in 1996 to be the conservative counterpoint to liberal Alan Colmes on FNC’s Hannity & Colmes (which lasted until 2009), Hannity has been a key member of the News Corp. family for nearly two decades. For the past 12 of those years, he has called a corner office in New York’s News Corp. Building home. Looking around the space, one finds various mementos of family, country, sports heroes, even his dry cleaner. They serve as memories of a long career in the spotlight, and virtually no corner is bereft of a keepsake. “I am always so focused working that I hardly ever notice a thing,” he said. He does have a favorite item: “My fridge. I always wanted a refrigerator in my office. I can’t tell you why.”

The glove is from Muhammad Ali, and the American flag flew over Iraq.

This collage captures a day Hannity spent on the campaign trail with President George W. Bush. “I thought I would only have a couple of minutes with him in his office, but I ended up staying with him the whole flight down,” said Hannity. “An experience of a lifetime.”

Hannity wears only white shirts so he’s never forced to choose a color.

Don’t read anything into his Trump tie collection. “I recently interviewed one of the other candidates who noticed the Trump tie,” he said. “I had to explain I just really like the ties; it was not an endorsement. I have not endorsed any candidate.”