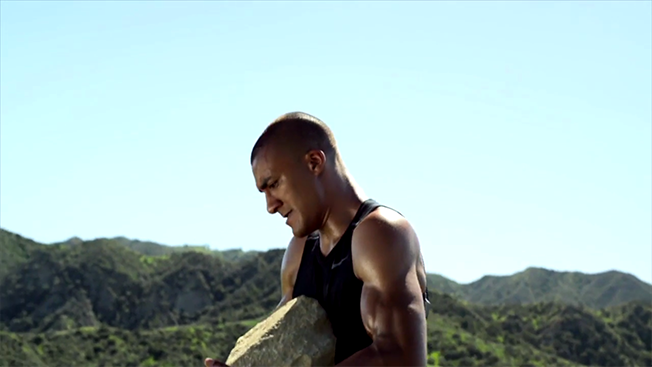 Stemming from the idea that Chobani helps power Olympic athletes with its all-natural products and a belief on the part of the brand's founder that "you can only be great if you're full of goodness," Chobani has launched a huge Olympics push, including TV spots, newly designed packaging, social components and more.

The campaign, centered around the slogan "No Bad Stuff," stars a diverse crew of Team USA hopefuls including soccer star Alex Morgan, decathlete Ashton Eaton, boxer Marlen Esparza, paratriathlon competitor Melissa Stockwell and wrestler Jordan Burroughs, among others. The five athletes star in a larger anthem spot as well as shorter 30- and 15-second spots, created in partnership with agency Opperman Weiss, all meant to showcase how Chobani and the athletes don't allow bad things in their products, bodies or lives.

"In order for these athletes to really reach their ultimate place of greatness it's not only that they can't let shitty food get into their body—they can't eat sugars and preservatives and chemicals and all that stuff—but they also can't allow negativity into their being and spirit, whether that's racism or hatred or jealousy or pride, all of those things that are blocks to greatness to athleticism," Jeff Weiss, Opperman Weiss co-founder, told Adweek.

Chobani carefully selected the athletes featured in the campaign, spending roughly four months finding a diverse group of competitors that not only have the potential to win medals but have also overcome adversity to get to the level they're at today. But beyond selecting athletes with a chance to medal for Team USA in Rio, Chobani also wanted to work with athletes who love its product and consume it regularly, and also "have very strong values, beliefs and work ethics [and are] wonderful community citizens," Peter McGuinness, chief marketing and brand officer at Chobani, told Adweek.

In the 30-second spots, Chobani dives deeper into individual athletes' stories, showing consumers how each one overcame adversity—Morgan's coach telling her, at the age of 13, that she would never be a great soccer player, for instance, or Esparza proving that women can kick butt in the boxing ring.

Each athlete's story is, of course, inspiring. But perhaps most inspiring of the 30-second spots is Stockwell's. A former U.S. Army officer who lost her left leg in a roadside bombing while serving in the Iraq War, Stockwell competed in the 2008 Summer Paralympics in swimming but eventually moved into triathlon training.

"We love the athletes' stories," McGuinness said. "We think they're fresh creatively, but they are also true and very human, and Chobani is a very human company. We've overcome adversity … and came out of it stronger and came out with more character, very similarly to the athletes,"

Then there are the 15-second spots that focus on the product. Each spot features a close-up shot of the athlete's favorite flavor yogurt with the athlete working out in the background. At the end of the spots, the athletes come into focus, grabbing their yogurt and saying, "They say you can only be great if you're full of greatness."

Viewers get a glimpse at some of the updated packaging in the 15-second spots, but what you don't see is the bottom of the yogurt lids, which have been updated for the Olympics, too. Over the next few days, consumers will find quotes from the different Team Chobani athletes under the lids.

Outside of the anthem spot and shorter documentary-style spots from Opperman Weiss, Chobani has also worked with the athletes to create online content, including videos on the athlete's favorite recipes that call for Chobani as well as workout videos. They've also created some deeper content, telling more of the athletes' stories in minidocumentary style.

"I'm really proud of how natural of a relationship this is and how authentic this is," McGuinness said. "I'm really proud of our team because we spent many, many months talking to many, many athletes, and like I said, we chose them for their diversity and their medal potential—but more importantly, we chose them for their humanity and how they behave in a community and country and in the world."