Chicken With a Beef: The Untold Story of Chick-fil-A’s Cow Campaign

How The Richards Group found a winning creative recipe 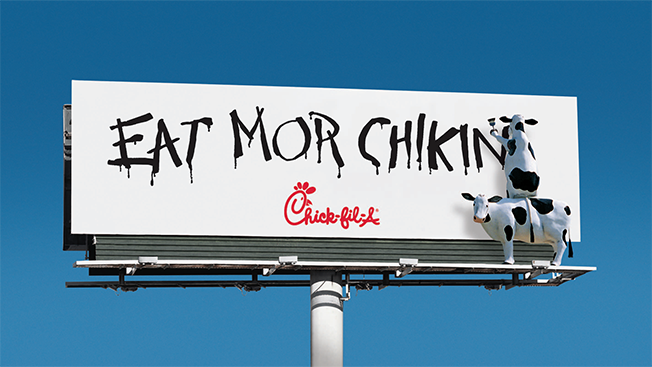 Stan Richards, founder and creative director of ad agency The Richards Group, was sitting in a routine staff meeting in 1994 when he learned his agency won the Chick-fil-A account. He didn't find out in an email. No phone call came in breaking the good news. Instead, David Salyers—then vp of national and regional marketing at Chick-fil-A—ventured from Atlanta to the agency's Dallas headquarters on a whim.

Salyers arrived, unannounced, and boldly walked into the meeting. He stopped whatever conversation was taking place and shook Richards' hand. "We want you to be our new agency," he said with a smile.

In that moment, Salyers made a promise to Richards that the agency said still rings true today: "We will never be your biggest client, but we will do everything we can do to be your best client."

And, Richards tells Adweek, "that's exactly what they've done over all those years."

In the early '90s, Chick-fil-A was primarily known for being a mall-based fast-food chain, but beginning in 1994, the chain started slowly shifting its focus to freestanding units. With that shift came a new batch of competitors—big burger joints.

These chains spent more in one week on their advertising than Chick-fil-A could afford to spend in a year. Plus, the chicken chain was already at a competitive disadvantage due to its stance on all locations being closed Sundays.

The brand needed an agency that could work with its budget to create stop-you-in-your-tracks advertising campaigns and encourage more people to choose Chick-fil-A over "the other guys."

The catch? With its advertising budget constraints, Chick-fil-A couldn't afford to spend the money on a TV campaign and instead was set on relying heavily on three-dimensional billboards, something that was nearly unheard of in the advertising world then.

"At the time, a billboard campaign was extraordinarily revolutionary because conventional wisdom was billboards tell you what exit to take," The Richards Group's Rob VanGorden, a principal on the Chick-fil-A account, tells Adweek. "You don't build a brand on billboards."

The brand also suffered from what VanGorden calls "extreme back-of-mind awareness." In focus groups, the agency found that when it asked participants about their favorite fast-food chains, a Chick-fil-A mention was rare. It was only when the agency gave participants a nudge that "it brought back all the emotions of what a great place Chick-fil-A was," VanGorden recalls.

In order to get through to its desired consumers and boost awareness for the chain, The Richards Group needed a simple, visual idea that would stand out on crowded highways. So, where to begin?

The road to the perfect billboard—and the birth of the cow campaign—was bumpy. VanGorden credits Chick-fil-A for the client's trust and extreme patience throughout the process as the agency delivered a few "foul balls" before getting it right.

Created in 1994, the first attempt featured an image of a rubber chicken on a Dallas billboard—no logo, no tagline, just a lonesome rubber chicken. The idea was intriguing and garnered some buzz on local radio stations, but the billboard needed more substance if morning commuters were going to understand with just a glance what was being advertised.

Next, the agency slapped the Chick-fil-A logo in the bottom right corner and added the tagline, "If it's not Chick-fil-A, it's a joke," beneath the rubber chicken. It was a step closer. "A fine billboard," according to VanGorden, but the agency still hadn't managed to deliver a 3-D idea to the client. "It accomplished the mission of stopping people and making people notice, but it didn't really say the things about our brand that we wanted it to say. It didn't differentiate us in any way."

The team's next iteration, the "Double Drive-Thru" ad showing two cars that seemed to have crashed into the billboard, finally managed to incorporate some depth. Even the president of Coca-Cola at the time loved the idea, calling up the Chick-fil-A team to compliment them on the clever ad. However, the car billboard was focused solely on "product attributes." It still wasn't quite what the agency or the client was looking for. Birth of the cows

Feeling somewhat lost in a sea of semisuccessful billboards, The Richards Group was still hunting for that big idea. The team's next attempt came one step closer, with the inspiration coming from an unlikely place—Bart Simpson.

At the time, one of Bart's most noteworthy taglines, "Don't have a cow, man!," was seeping into pop culture. It was the perfect tagline for a company selling chicken products, so the creative team borrowed it, using the line, "Don't have a cow," on a billboard next to a picture of the classic chicken sandwich. The idea was there, but again, there was no 3-D component, and the product shot wasn't what the brand wanted.

"In the QSR category, we live in a sea of sameness, and most of our competition, they're selling a product at a price point," VanGorden says.

Drive down the highway and you're likely to see a handful of billboards for fast-food chains that feature massive burgers topped with bacon and cheese or a selection of refreshing smoothies or blended beverages, all with a low price slapped next to the product to seduce hungry drivers. If Chick-fil-A was going to stand out and steal away some of the big burger chains' customers, it needed to go bigger.

Then one day, an art director on the Chick-fil-A account was driving down a Dallas highway, on his way home for lunch and a little hungry, when a billboard caught his eye. It wasn't the subject of the billboard that intrigued him but rather the people pasting up a new ad.

What would happen if the team of workers up on that billboard decided to take a lunch break midway through the task, leaving the ad unfinished? That would be kind of clever, he thought. The team took that idea and ran with it.

For its next billboard, The Richards Group put up another product shot, but the right side of the billboard was still painted white. Atop the white space, the team scrawled a note: "Boss, got hungry, back soon," with a yellow ladder posted up beneath the note. It was witty and eye catching, a good move, but there was still something missing. A bigger, better idea was out there.

Thinking back to the "Don't Have a Cow" idea, a big hit with the client, creatives from the agency started thinking of ways to fuse the idea of not having a cow with the clever tone of the most recent billboard.